Not to be confused with squalane.

Squalene is a natural organic compound originally obtained for commercial purposes primarily from shark liver oil (hence its name, as Squalus is a genus of sharks). All plants and animals produce squalene as a biochemical intermediate, including in the liver of humans.[4] It occurs in high concentrations in the stomach oil of birds in the order Procellariiformes.[citation needed]

Squalene is a hydrocarbon and a triterpene, and is a precursor for synthesis of all plant and animal sterols, including cholesterol and steroid hormones in the human body.[citation needed]

Squalene is an important ingredient in some vaccine adjuvants: Novartis produces a substance they call MF59, while GlaxoSmithKline produces AS03.

In November 2020, National Geographic was concerned that the hammerhead shark (amongst other species) would be wiped out by the demand for squalene adjuvants of SARS-CoV-2 vaccines, but it turns out that "at least five" of the 202 candidate vaccines (including the now-defective UQ-CSL V451 MF59 candidate) use squalene adjuvants.[5] An alternative to the shark-based squalene adjuvant is produced from the bark of the soapbark tree, "which is abundant in Chile".[5] This soapbark tree alternative is used with the Novavax NVX-CoV2373 anticovax.[5] Yet another alternative squalene product is sourced from the sugarcane plant by Amyris.[5]

Squalene is the biochemical precursor to the whole family of steroids.[6] Oxidation (via squalene monooxygenase) of one of the terminal double bonds of squalene yields 2,3-squalene oxide, which undergoes enzyme-catalyzed cyclization to afford lanosterol, which is then elaborated into cholesterol and other steroids. 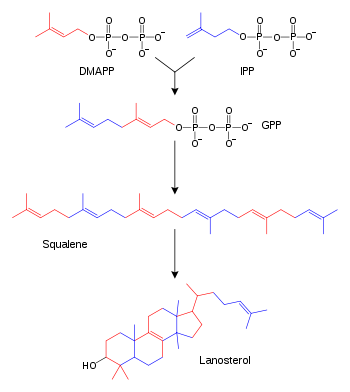 Researchers revealed in August 2020 that Camellia japonica leaf contains a pentacyclic triterpenoid anti-inflammatory compound named lupeol which is produced from the precursor squalene.[7]

Click on genes, proteins and metabolites below to link to respective articles. [§ 1] 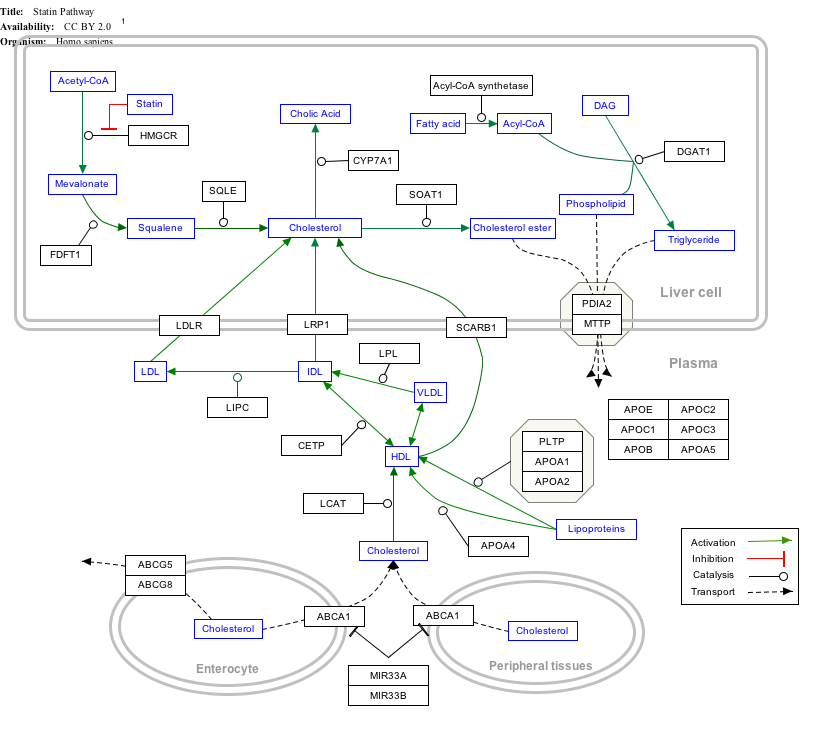 Squalene is a low density compound often stored in the bodies of cartilaginous fish such as sharks, which lack a swim bladder and must therefore reduce their body density with fats and oils. Squalene, which is stored mainly in the shark's liver, is lighter than water with a specific gravity of 0.855.[citation needed]

Some hunt sharks to process their livers for the purpose of making squalene health capsules.[citation needed]

Use as an adjuvant in vaccines[edit]

An adjuvant using squalene is Seqirus' proprietary MF59, which is added to influenza vaccines to help stimulate the human body's immune response through production of CD4 memory cells. It is the first oil-in-water influenza vaccine adjuvant to be commercialized in combination with a seasonal influenza virus vaccine. It was developed in the 1990s by researchers at Ciba-Geigy and Chiron; both companies were subsequently acquired by Novartis.[11] Novartis was later acquired by CSL Bering and created the company Seqirus. It is present in the form of an emulsion and is added to make the vaccine more immunogenic.[11] However, the mechanism of action remains unknown. MF59 is capable of switching on a number of genes that partially overlap with those activated by other adjuvants.[12] How these changes are triggered is unclear; to date, no receptors responding to MF59 have been identified. One possibility is that MF59 affects the cell behavior by changing the lipid metabolism, namely by inducing accumulation of neutral lipids within the target cells.[13] An influenza vaccine called FLUAD which used MF59 as an adjuvant was approved for use in the US in people 65 years of age and older, beginning with the 2016-2017 flu season.[14]

A 2009 meta-analysis assessed data from 64 clinical trials of influenza vaccines with the squalene-containing adjuvant MF59 and compared them to the effects of vaccines with no adjuvant. The analysis reported that the adjuvanted vaccines were associated with slightly lower risks of chronic diseases, but that neither type of vaccines altered the rate of autoimmune diseases; the authors concluded that their data "supports the good safety profile associated with MF59-adjuvanted influenza vaccines and suggests there may be a clinical benefit over non-MF59-containing vaccines".[15]

In 2020, conservationists raised concerns about the potential slaughter of sharks to obtain squalene for a COVID-19 vaccine.[16]

As a common lipid produced by sebaceous glands, with 12% of bodily squalene in humans coming from the sebum,[17] squalene has a role in topical skin lubrication and protection.[18] Toxicology studies indicate that in the concentrations used in cosmetics, squalene has low acute toxicity, and is not a significant contact allergen or irritant.[19][20][21]

There have been attempts to link squalene to Gulf War Syndrome mainly due to the idea that squalene might have been present in an anthrax vaccine given to some military personnel during the 1991 Persian Gulf War. Studies found that deployed Persian Gulf War Syndrome patients are significantly more likely to have antibodies to squalene (95 percent) than asymptomatic Gulf War veterans (0 percent; p<.001).[22][23] The first of these published results concludes with the following statement: "It is important to note that our laboratory-based investigations do not establish that squalene was added as adjuvant to any vaccine used in military or other personnel who served in the Persian Gulf War era." The second publication, however, links the incidence of anti-squalene antibodies and Gulf War Syndrome to five specific lots of vaccine. Furthermore, they cite results of 1999 testing by the U.S. Food and Drug Administration which found these specific lots of vaccine to contain squalene.[24] In response to these results, a committee of the US Institute of Medicine stated that "The committee does not regard this study as providing evidence that the investigators have successfully measured antibodies to squalene", since the authors did not perform the normal scientific controls needed to show that their test was specific to anti-squalene antibodies.[25] It has also been determined that the anthrax vaccines given to those US military personnel did not use squalene as an adjuvant.[26][27][28] The vaccines were also tested for squalene, and none was detected with standard methods.[29] Another method found no squalene in 37 of the 38 lots tested. One lot contained traces of squalene, at less than ten parts per billion, which is about one-thirtieth the level found in human blood.[30] The FDA stated that this trace of squalene probably came from a fingerprint, since the oils on human skin contain enough squalene to send these extremely sensitive tests "off the chart".[31]

A later study reported that about one in ten people have squalene antibodies in their blood, regardless of whether or not they received squalene from a vaccination.[32] A later study confirmed this result, and also showed that vaccination with squalene-containing vaccines do not alter the levels of these naturally-occurring antibodies.[26] A third study showed that these naturally-occurring antibodies were no more common in Gulf war veterans than in the general population.[33]

A squalene adjuvanted influenza vaccine, Pandemrix, that was given in Scandinavia and elsewhere in Europe in 2009 may be associated with narcolepsy, a disorder of wakefulness. Incidence of this side effect was rare — just 1 in 15,000 or 1 in 50,000, depending on the country — but statistically significant.[34][35][36] An epidemiologic analysis of safety data on MF59 seasonal and pandemic influenza vaccines showed no evidence of increased risk of vaccine adverse events of potential autoimmune origin.[15]

The World Health Organization and the US Department of Defense have both published extensive reports that emphasize that squalene is a chemical naturally occurring in the human body, present even in oils of human fingerprints.[11][37] WHO goes further to explain that squalene has been present in over 22 million flu vaccines given to patients in Europe since 1997 and there have never been significant vaccine-related adverse events.[11]