Turpentine (also called spirit of turpentine, oil of turpentine, wood turpentine and colloquially turps[3]) is a fluid obtained by the distillation of resin from live trees, mainly pines. It is mainly used as a solvent and as a source of materials for organic synthesis.

Turpentine is composed of terpenes, mainly the monoterpenes alpha-pinene and beta-pinene with lesser amounts of carene, camphene, dipentene, and terpinolene.[4]

The word turpentine derives (via French and Latin) from the Greek word τερεβινθίνη terebinthine, the feminine form (to go with the feminine Greek word for resin) of an adjective τερεβίνθινος derived from the Greek noun τερέβινθος, the name for a species of tree, the terebinth tree.[5] Mineral turpentine or other petroleum distillates are used to replace turpentine, but they are very different chemically.[6] 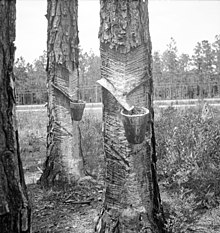 "Herty system" in use on turpentine trees in Northern Florida, circa 1936

Canada balsam, also called Canada turpentine or balsam of fir, is a turpentine which is made from the oleoresin of the balsam fir. Venice turpentine is produced from the western larch Larix occidentalis.

To tap into the sap producing layers of the tree, turpentiners used a combination of hacks to remove the pine bark. Once debarked, pine trees secrete oleoresin onto the surface of the wound as a protective measure to seal the opening, resist exposure to micro-organisms and insects, and prevent vital sap loss. Turpentiners wounded trees in V-shaped streaks down the length of the trunks to channel the oleoresin into containers. It was then collected and processed into spirits of turpentine. Oleoresin yield may be increased by as much as 40% by applying paraquat herbicides to the exposed wood.[7]

The V-shaped cuts are called "catfaces" for their resemblance to a cat's whiskers. These marks on a pine tree signify it was used to collect resin for turpentine production.[8]

Crude oleoresin collected from wounded trees may be evaporated by steam distillation in a copper still. Molten rosin remains in the still bottoms after turpentine has been evaporated and recovered from a condenser.[7] Turpentine may alternatively be condensed from destructive distillation of pine wood.[4]

Oleoresin may also be extracted from shredded pine stumps, roots, and slash using the light end of the heavy naphtha fraction (boiling between 90 and 115 °C or 195 and 240 °F) from a crude oil refinery. Multi-stage counter-current extraction is commonly used so fresh naphtha first contacts wood leached in previous stages and naphtha laden with turpentine from previous stages contacts fresh wood before vacuum distillation to recover naphtha from the turpentine. Leached wood is steamed for additional naphtha recovery prior to burning for energy recovery.[9]

Industrial and other end uses[edit]

The two primary uses of turpentine in industry are as a solvent and as a source of materials for organic synthesis. As a solvent, turpentine is used for thinning oil-based paints, for producing varnishes, and as a raw material for the chemical industry. Its industrial use as a solvent in industrialized nations has largely been replaced by the much cheaper turpentine substitutes distilled from crude oil. Turpentine has long been used as a solvent, mixed with beeswax or with carnauba wax, to make fine furniture wax for use as a protective coating over oiled wood finishes (e.g., tung oil).

Turpentine is also used as a source of raw materials in the synthesis of fragrant chemical compounds. Commercially used camphor, linalool, alpha-terpineol, and geraniol are all usually produced from alpha-pinene and beta-pinene, which are two of the chief chemical components of turpentine. These pinenes are separated and purified by distillation. The mixture of diterpenes and triterpenes that is left as residue after turpentine distillation is sold as rosin.

Turpentine and petroleum distillates such as coal oil and kerosene have been used medicinally since ancient times, as topical and sometimes internal home remedies. Topically, it has been used for abrasions and wounds, as a treatment for lice, and when mixed with animal fat it has been used as a chest rub, or inhaler for nasal and throat ailments.[12] Many modern chest rubs, such as the Vicks variety, still contain turpentine in their formulations.

Turpentine, now understood to be dangerous for consumption, was a common medicine among seamen during the Age of Discovery. It is one of several products carried aboard Ferdinand Magellan's fleet in his first circumnavigation of the globe.[13] Taken internally it was used as a treatment for intestinal parasites. This is dangerous, due to the chemical's toxicity.[14][15]

Turpentine enemas, a very harsh purgative, had formerly been used for stubborn constipation or impaction.[16] Turpentine enemas were also given punitively to political dissenters in post-independence Argentina.[17]

As an organic solvent, its vapour can irritate the skin and eyes, damage the lungs and respiratory system, as well as the central nervous system when inhaled, and cause damage to the renal system when ingested, among other things.[23] Being combustible, it also poses a fire hazard. Ingestion can cause burning sensations, abdominal pain, nausea, vomiting, confusion, convulsions, diarrhea, and unconsciousness.[24] Because turpentine can cause spasms of the airways particularly in people with asthma and whooping cough, it can contribute to a worsening of breathing issues in persons with these diseases if inhaled.

People can be exposed to turpentine in the workplace by breathing it in, skin absorption, swallowing it, and eye contact. The Occupational Safety and Health Administration (OSHA) has set the legal limit (permissible exposure limit) for turpentine exposure in the workplace as 100 ppm (560 mg/m3) over an 8-hour workday. The same threshold was adopted by the National Institute for Occupational Safety and Health (NIOSH) as the recommended exposure limit (REL). At levels of 8000 ppm (4,448 mg/m3), turpentine is immediately dangerous to life and health.[25]