Not to be confused with bronchiolitis.

Bronchitis is inflammation of the bronchi (large and medium-sized airways) in the lungs that causes coughing.[1] Symptoms include coughing up sputum, wheezing, shortness of breath, and chest pain.[1] Bronchitis can be acute or chronic.[1]

Acute bronchitis usually has a cough that lasts around three weeks,[4] and is also known as a chest cold.[5] In more than 90% of cases the cause is a viral infection.[4] These viruses may be spread through the air when people cough or by direct contact.[6] A small number of cases are caused by a bacterial infection such as Mycoplasma pneumoniae or Bordetella pertussis.[4] Risk factors include exposure to tobacco smoke, dust, and other air pollution.[6] Treatment of acute bronchitis typically involves rest, paracetamol (acetaminophen), and nonsteroidal anti-inflammatory drugs (NSAIDs) to help with the fever.[7][8]

Chronic bronchitis is defined as a productive cough – one that produces sputum – that lasts for three months or more per year for at least two years.[9][10] Many people with chronic bronchitis have chronic obstructive pulmonary disease (COPD).[11] Tobacco smoking is the most common cause, with a number of other factors such as air pollution and genetics playing a smaller role.[12] Treatments include quitting smoking, vaccinations, rehabilitation, and often inhaled bronchodilators and steroids.[13] Some people may benefit from long-term oxygen therapy.[13] 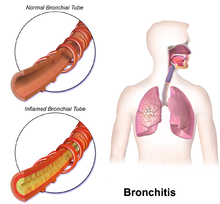 Acute bronchitis, also known as a chest cold, is short term inflammation of the bronchi of the lungs.[4][6] The most common symptom is a cough, that may or may not produce sputum.[4][17] Other symptoms may include coughing up mucus, wheezing, shortness of breath, fever, and chest discomfort.[6] Fever when present is mild.[18] The infection may last from a few to ten days.[6] The cough may persist for several weeks afterwards, with the total duration of symptoms usually around three weeks.[4][6] Symptoms may last for up to six weeks.[7]

In more than 90% of cases, the cause is a viral infection.[4] These viruses may spread through the air when people cough or by direct contact.[6] Risk factors include exposure to tobacco smoke, dust, and other air pollutants.[6] A small number of cases are due to bacteria such as Mycoplasma pneumoniae or Bordetella pertussis.[4]

Diagnosis is typically based on a person's signs and symptoms.[18] The color of the sputum does not indicate if the infection is viral or bacterial.[4] Determining the underlying organism is usually not required.[4] Other causes of similar symptoms include asthma, pneumonia, bronchiolitis, bronchiectasis, and COPD.[2][4] A chest X-ray may be useful to detect pneumonia.[4]

Another common sign of bronchitis is a cough which lasts ten days to three weeks. If the cough lasts for longer than a month, it may become chronic bronchitis. In addition, a fever may be present. Acute bronchitis is normally caused by a viral infection. Typically, these infections are rhinovirus, parainfluenza, or influenza. No specific testing is normally needed in order to diagnose acute bronchitis.[18]

Prevention is by not smoking and avoiding other lung irritants.[19] Frequent hand washing may also be protective.[19] Treatment for acute bronchitis usually involves rest, paracetamol (acetaminophen), and NSAIDs to help with the fever.[7][8] Cough medicine has little support for its use, and is not recommended in children under the age of six.[4][20] There is tentative evidence that salbutamol may be useful in treating wheezing; however, it may result in nervousness and tremors.[4][21] Antibiotics should generally not be used.[17] An exception is when acute bronchitis is due to pertussis.[4] Tentative evidence supports honey and pelargonium to help with symptoms.[4] Getting plenty of rest and drinking enough fluids are often recommended as well.[22] Chinese medicinal herbs are of unclear effect.[23]

Chronic bronchitis is a respiratory disease marked by overproduction of mucus and mucins.[9][34] The excess mucus is produced by goblet cells and enlarged submucosal glands in response to long-term irritation.[35] The mucous glands in the submucosa secrete more than the goblet cells.[36] Mucins thicken mucus, and their concentration has been found to be high in cases of chronic bronchitis, and also to correlate with the severity of the disease.[37] Excess mucus can narrow the airways, thereby limiting airflow and accelerating the decline in lung function, and result in COPD.[33][38][33] Excess mucus shows itself as a chronic productive cough and its severity and volume of sputum can fluctuate in periods of acute exacerbations.[33] In COPD, those with the chronic bronchitic phenotype with associated chronic excess mucus, experience a worse quality of life than those without.[33]

The increased secretions are initially cleared by coughing.[34] The cough is often worse soon after awakening, and the sputum produced may have a yellow or green color and may be streaked with specks of blood.[39] In the early stages, a cough can maintain mucus clearance. However, with continued excessive secretion, mucus clearance is impaired and when the airways become obstructed a cough becomes ineffective.[40] Effective mucociliary clearance depends on airway hydration, ciliary beating, and the rates of mucin secretion. Each of these factors is impaired in chronic bronchitis.[41] Chronic bronchitis can lead to a higher number of exacerbations and a faster decline in lung function.[38][42] The ICD-11 lists chronic bronchitis with emphysema (emphysematous bronchitis) as a "certain specified COPD".[43][44]

Most cases of chronic bronchitis are caused by tobacco smoking.[45][46] Chronic bronchitis in young adults who smoke is associated with a greater chance of developing COPD.[47] There is an association between smoking cannabis and chronic bronchitis.[48][49] In addition, chronic inhalation of air pollution, or irritating fumes or dust from hazardous exposures in occupations such as coal mining, grain handling, textile manufacturing, livestock farming,[50] and metal moulding may also be a risk factor for the development of chronic bronchitis.[51][52][53] Bronchitis caused in this way is often referred to as industrial bronchitis, or occupational bronchitis.[54] Rarely genetic factors also play a role.[55]

Air quality can also affect the respiratory system with higher levels of nitrogen dioxide and sulfur dioxide contributing to bronchial symptoms. Sulfur dioxide can cause inflammation which can aggravate chronic bronchitis and make infections more likely.[56]

Air pollution in the workplace is the cause of several non-communicable diseases (NCDs) including chronic bronchitis.[57]

The condition of bronchitis has been recognised for many centuries, in several different cultures including the Ancient Greek, Chinese, and Indian, with the presence of excess phlegm and cough noted in recognition of the same condition.[63]

In Britain in 1808, a physician Charles Badham was the first person to describe the condition and name the acute form as acute bronchitis. This was written of in a book entitled Inflammatory conditions of the bronchia. In this book Badham distinguished three forms of bronchitis including acute and chronic. A second edition of this book was renamed An Essay on Bronchitis and published in 1814.[63] Bradham used the term catarrh to refer to the cardinal symptoms of chronic cough and mucus hypersecretion of chronic bronchitis, and described chronic bronchitis as a disabling disorder.[64]

In 1901 an article was published on the treatment of chronic bronchitis in the elderly. The symptoms described have remained unchanged. The cause was thought to be brought on by dampness, cold weather, and foggy conditions, and treatments were aimed towards various cough mixtures, respiratory stimulants, and tonics. It was noted that something other than the weather was thought to be at play.[65] Exacerbations of the condition were also described at this time. Another physician Harry Campbell was referred to who had written in the British Medical Journal a week before. Campbell had suggested that the cause of chronic bronchitis was due to toxic substances, and recommended pure air, simple food, and exercise to remove them from the body.[65]

A joint research programme was undertaken in Chicago and London from 1951 to 1953 in which the clinical features of one thousand cases of chronic bronchitis were detailed. The findings were published in the Lancet in 1953.[66] It was stated that since its introduction by Badham, chronic bronchitis had become an increasingly popular diagnosis. The study had looked at various associations such as the weather, conditions at home, and at work, age of onset, childhood illnesses, smoking habits, and breathlessness. It was concluded that chronic bronchitis invariably led to emphysema, particularly when the bronchitis had persisted for a long time.[66]

In 1957 it was noted that at the time there were many investigations being carried out into chronic bronchitis and emphysema in general, and among industrial workers exposed to dust.[67] Excerpts were published dating from 1864 in which Charles Parsons had noted the occurring consequence of the development of emphysema from bronchitis. This was seen to be not always applicable. His findings were in association with his studies on chronic bronchitis among pottery workers.[67]

A CIBA (now Novartis) meeting in 1959, and a meeting of the American Thoracic Society in 1962, defined chronic bronchitis as a component of COPD, in the terms that have not changed.[64][68]

Eosinophilic bronchitis is a chronic dry cough, defined by the presence of an increased number of a type of white blood cell known as eosinophils. It has a normal finding on X-ray and has no airflow limitation.[69]

Plastic bronchitis describes a rarely found condition of thickened mucus that accumulates in the bronchi as plugs. The mucus plugs are rubbery and obstruct the airflow, and often result in the overinflation of the opposite lung. Plastic bronchitis usually occurs in children. The mucus plugs take the shape of the bronchi that they fill, and are known as bronchial casts. Some cases may result from abnormalities in the lymphatic vessels. Advanced cases may show imaging similarities to bronchiectasis.[73]

Aspergillus bronchitis is one of the Aspergillosis spectrum of diseases, in which the bronchi are specifically subject to a fungal infection. This differs from the other pulmonary aspergillosis conditions, in that it need not affect just the immunocompromised.[74][75]