Fine outgrowths or appendages on plants, algae, lichens, and certain protists. A unicellular or multicellular plant structure that forms a non-sclerified outgrowth from the epidermis
Not to be confused with Trichrome. 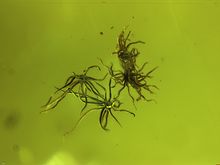 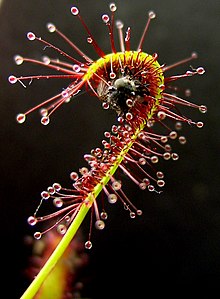 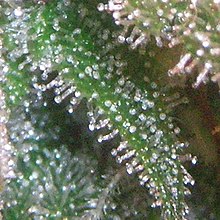 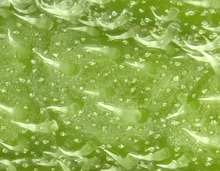 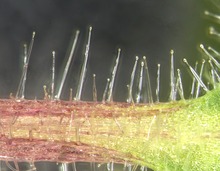 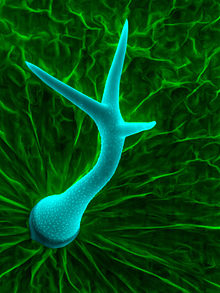 Non-glandular trichomes are important for plant protection against UV light.[4]

The model plant, Cistus salvifolius, is found in areas of high-light stress and poor soil conditions, along the Mediterranean coasts. It contains non-glandular, stellate and dendritic trichomes that have the ability to synthesize and store polyphenols that both affect absorbance of radiation and plant desiccation. These trichomes also contain acetylated flavonoids, which can absorb UV-B, and non-acetylated flavonoids, which absorb the longer wavelength of UV-A. In non-glandular trichomes, the only role of flavonoids is to block out the shortest wavelengths to protect the plant, which differs from in glandular trichomes.[4]

Non-glandular trichomes in the genus Cistus were found to contain presences of ellagitannins, glycosides, and kaempferol derivatives. The ellagitannins have the main purpose of helping adapt in times of nutrient-limiting stress.[4]

Red Trichomes on a roses stem 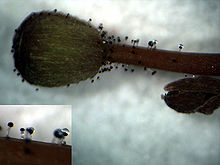