Not to be confused with Retinol.
This article is about the molecule. For matters pertaining to the anatomical feature, see Retina.

Retinal, also known as retinaldehyde, is a form of vitamin A. It was originally called retinene,[2] and renamed[3] after it was discovered to be vitamin A aldehyde.[4][5] Retinal is one of the many forms of vitamin A (the number of which varies from species to species). Retinal is a polyene chromophore, bound to proteins called opsins, and is the chemical basis of animal vision. Retinal allows certain microorganisms to convert light into metabolic energy.

Vertebrate animals ingest retinal directly from meat, or they produce retinal from carotenoids, either from one of two carotenes (α-carotene, β-carotene) or from β-cryptoxanthin, a type of xanthophyll. These carotenoids must be obtained from plants or other photosynthetic organisms. No other carotenoids can be converted by animals to retinal, and some carnivores cannot convert any carotenoids at all. The other main forms of vitamin A, retinol, and a partially active form, retinoic acid, may both be produced from retinal.

Invertebrates such as insects and squid use hydroxylated forms of retinal in their visual systems, which derive from conversion from other xanthophylls.

Retinal is a conjugated chromophore. In the human eye, retinal begins in an 11-cis-retinal configuration, which, upon capturing a photon of the correct wavelength, straightens out into an all-trans-retinal configuration. This configuration change pushes against an opsin protein in the retina, which triggers a chemical signaling cascade which can result in perception of light or images by the human brain. The absorbance spectrum of the chromophore depends on its interactions with the opsin protein to which it is bound, so that different retinal-opsin complexes will absorb photons of different wavelengths (different colors of light). 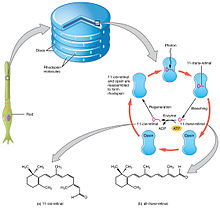 An opsin protein surrounds a molecule of retinal, awaiting detection of a photon. Once retinal captures a photon, retinal's configuration change pushes against the surrounding opsin protein. Opsin may send a chemical signal to the human brain signaling that light has been detected. Retinal is then reloaded into its 11-cis configuration by ATP phosphorylation and the cycle begins again. 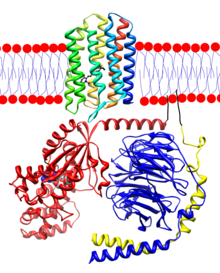 Animal GPCR rhodopsin (rainbow colored) embedded in a lipid bilayer (heads red and tails blue) with transducin below it. Gtα is colored red, Gtβ blue, and Gtγ yellow. There is a bound GDP molecule in the Gtα-subunit and a bound retinal (black) in the rhodopsin. The N-terminus terminus of rhodopsin is red and the C-terminus blue. Anchoring of transducin to the membrane has been drawn in black.

Opsins are proteins and the retinal-binding visual pigments found in the photoreceptor cells in the retinas of eyes. An opsin is arranged into a bundle of seven transmembrane alpha-helices connected by six loops. In rod cells the opsin molecules are embedded in the membranes of the disks which are entirely inside of the cell. The N-terminus head of the molecule extends into the interior of the disk, and the C-terminus tail extends into the cytoplasm of the cell. In cone cells the disks are defined by the cell's plasma membrane so that the N-terminus head extends outside of the cell. Retinal binds covalently to a lysine on the transmembrane helix nearest the C-terminus of the protein through a Schiff base linkage. Formation of the Schiff base linkage involves removing the oxygen atom from retinal and two hydrogen atoms from the free amino group of lysine, giving H2O. Retinylidene is the divalent group formed by removing the oxygen atom from retinal, and so opsins have been called retinylidene proteins.

Opsins are prototypical G protein-coupled receptors (GPCRs).[13] Bovine rhodopsin, the opsin of the rod cells of cattle, was the first GPCR to have its X-ray structure determined.[14] Bovine rhodopsin contains 348 amino acid residues. The retinal chromophore binds at Lys296. 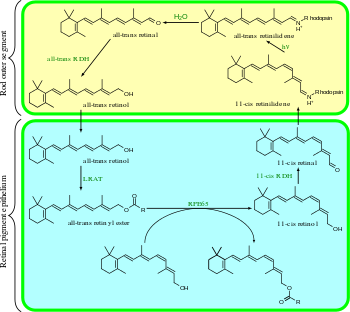 The visual cycle is a circular enzymatic pathway, which is the front-end of phototransduction. It regenerates 11-cis-retinal. For example, the visual cycle of mammalian rod cells is as follows:

RPE65 isomerohydrolases are homologous with beta-carotene monooxygenases;[6] the homologous ninaB enzyme in Drosophila has both retinal-forming carotenoid-oxygenase activity and all-trans to 11-cis isomerase activity.[19]

The American biochemist George Wald and others had outlined the visual cycle by 1958. For his work, Wald won a share of the 1967 Nobel Prize in Physiology or Medicine with Haldan Keffer Hartline and Ragnar Granit.[21]