Artemisia annua belongs to the plant family of Asteraceae and is an annual short-day plant. Its stem is erect brownish or violet brown. The plant itself is hairless and naturally grows from 30 to 100 cm tall, although in cultivation it is possible for plants to reach a height of 200 cm. The leaves of A. annua have a length of 3–5 cm and are divided by deep cuts into two or three small leaflets. The intensive aromatic scent of the leaves is characteristic.[8] The artemisinin content in dried leaves is in between 0% and 1.5%.[9] New hybrids of Artemisia annua developed in Switzerland can reach a leaf artemisinin content of up to 2%.[10] The small flowers have a diameter of 2–2.5 mm and are arranged in loose panicles. Their color is green-yellowish. The seeds are brown achenes with a diameter of only 0.6–0.8 mm. Their thousand-kernel weight (TKW) averages around 0.03 g (in comparison, wheat has a TKW of approximately 45 g).[8][11]

The growing period of Artemisia annua from seeding till harvest is 190–240 days, depending on the climate and altitude of the production area. The plant should be harvested at the beginning of flowering. At that time the artemisinin content is the highest.[12] Dry leaf yields of Artemisia annua plantations vary between 0.5 and 3 t/ha.[10]

In terms of the climate A. annua prefers sunny and warm conditions. Its optimal growth temperature lies within 20 and 25 °C. Annual temperature sums of 3500–5000 °C (sum of temperatures higher 10 °C over one year) are required to guarantee a proper maturing. The rainfall during the growing season should not be less than 600 mm (annual rainfall higher 1150 mm). Especially the seedlings of A. annua. are susceptible to drought or water lodging. The mature plants on the other hand are quite resistant to those climate conditions. Nevertheless, the preferred soil conditions for A. annua are light soils with deep topsoils and good drainage properties.[12] But it is reported, that the plant is adaptable to different soil types. Paired with the relatively low demand on the environment Artemisia annua can have characteristics of a neophytic plant.[13]

Artemisia annua is best sown in rows. That facilitates weeding, which has to be done mechanically or manually since no chemical crop protection agents are admitted. It is recommended to sow 1.4 – 2 seeds per square meter.[10] The fertilizer requirements are on a low level. Potassium should be used as base fertilizer. It is taken up by the plant during the whole growing season.[12] Nitrogen is required during early branching stages, an amount of approximately 70 kg N/ha is sufficient for the plant.[14] Phosphate on the other hand is required during the blooming stages. Phosphate fertilization can lead to a higher artemsinin content in the leaves.[15] The application of salicylic acid on the leaves shortly before harvesting the plant also can raise its artemisinin content.[16] Besides few viral diseases Artemisia a. has no major diseases that need to be controlled.

The harvest of the plant is best done in the state of flower budding. The whole plant is harvested and cut into branches which are dried in the sun or in an oven. The drying temperature should not exceed 40 °C. The dry branches are shaken or beaten to separate the leaves from the stem. The leaves are then packed into fabric bags and shipped to further processing.[12] It is important that the temperatures during transportation and storage never get higher than 40 °C, otherwise artemisinin gets volatile and is lost into the air. The leaves should not be crushed before long time storage (1 year). The optimal storage conditions are either 20 °C with 85% relative humidity (RH) or 30 °C with 30–40% RH.[17]

In traditional Chinese medicine (TCM), A. annua is traditionally used to treat fever.[18] Due to duplication in ancient TCM scriptures, A. annua is more commonly referred to as qinghao (Chinese: 青蒿; pinyin: qīnghāo), the modern Chinese name for Artemisia carvifolia, as opposed to its current Chinese name huanghuahao.[19] Pharmacopoeia of the People's Republic of China defines qinghao in TCM as "dried aboveground parts of A. annua".[20]

The proposed mechanism of action of artemisinin involves cleavage of endoperoxide bridges by iron, producing free radicals (hypervalent iron-oxo species, epoxides, aldehydes, and dicarbonyl compounds) which damage biological macromolecules causing oxidative stress in the cells of the parasite.[21] Malaria is caused by apicomplexans, primarily Plasmodium falciparum, which largely reside in red blood cells and itself contains iron-rich heme-groups (in the form of hemozoin).[22] In 2015 artemisinin was shown to bind to a large number targets suggesting that it acts in a promiscuous manner.[23]

In 1971, scientists demonstrated the plant extracts had antimalarial activity in primate models, and in 1972, the active ingredient, artemisinin (formerly referred to as arteannuin), was isolated and its chemical structure described. Artemisinin may be extracted using a low boiling point solvent, such as diethylether, and is found in the glandular trichomes of the leaves, stems, and inflorescences, and it is concentrated in the upper portions of plant within new growth.[24] The first isolation of artemisinin from the herb occurred from a military project known as Project 523, following the study of traditional medicine pharmacopoeias performed by Tu Youyou and other researchers within the project.[25] 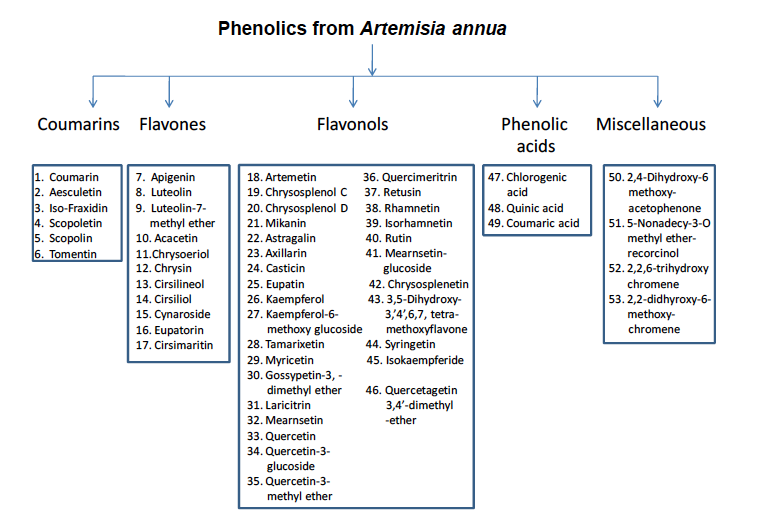 Apart from the active compound Artemisinin, recent studies show that A. annua is one of the four medical plants with the highest Oxygen radical absorbance capacity (ORAC) level.[26]

Flavonoids are generally known for their redox properties involved in the delay or inhibition of the initiation or propagation in oxidizing chain reactions.[27]

Even though the beneficial effect of these phenolic compounds on a great number of diseases is often discussed, different studies show beneficial effects of flavonoids compound produced by A. annua. It has been stated that there is a negative correlation between the presence of the mentioned components and cardiovascular diseases, cancer and parasitic disease such as malaria.[27]

In the last 20 years researchers focused on the activity of artemisinin against malaria. Therefore, fewer studies have been done about the relationship between flavonoids and cancer. Despite that, recent studies show that the flavonoids present in the A. annua leaf are linked to suppression of CYP450 enzymes responsible for altering the absorption and metabolism of artemisinin in the body.[27] Further researches in the synergistic effect of artemisinin and flavonoids and their biological interaction between malaria and cancer are needed.[27] 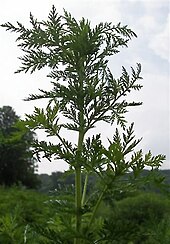 Research to develop antimalarial drugs led to the discovery of artemisinin, a compound which is extracted from Artemisia annua, in the 1970s by Chinese scientist Tu Youyou, for which she shared the 2015 Nobel Prize in Physiology or Medicine.[18][28] While most TCM herbs are boiled at high temperature that can damage the active ingredient in Artemisia annua,[28] one traditional source calls for this herb to be steeped in cold water.[29] Noting this, scientists found that a better extract was obtained by using a low-temperature ether-based extraction method. Purification processes were used to isolate the active molecule, and clinical trials showed the active ingredient to be an effective drug.[28]

Artemisinin is a sesquiterpene lactone with an endoperoxide bridge and has been produced semisynthetically as an antimalarial drug. The efficacy of tea, made with either water or urine and A. annua, for the treatment of malaria is dubious, and is discouraged by the World Health Organization (WHO).[30] Research has found that artemesinin is not soluble in water and the concentrations in these infusions are considered insufficient to treat malaria.[31][32][33] In 2004, the Ethiopian Ministry of Health changed Ethiopia's first line antimalaria drug from sulfadoxine/pyrimethamine (Fansidar), which has an average 36% treatment failure rate, to artemether/lumefantrine (Coartem), a drug therapy containing artemesinin which is 100% effective when used correctly, despite a worldwide shortage at the time of the needed derivative from A. annua.[34] A 2012 review said that artemisinin-based remedies are the most effective drugs for the treatment of malaria.[35] A 2013 review suggested that although Artemisia annua may not cause hepatotoxicity, haematotoxicity, or hyperlipidemia, it should be used cautiously during pregnancy due to a potential risk of embryotoxicity at a high dose.[36]

In April 2020, President Andry Rajoelina of Madagascar, speaking at the launch of a drink made from a variety of herbs though predominantly from A. annua and ravensara,[41] recommended the product as a treatment for COVID-19 patients and said students' return to schools (which were closed during the pandemic[42]) would be conditioned on their consumption of it. However, despite anecdotal reports of the use of A. annua against COVID-19 in China, there is no clear evidence of the effectiveness of the tea against the infection, and no clinical studies have been conducted.[43] The WHO warns that the drink's efficacy as a treatment for COVID-19 is unproven, while the African Union is seeking technical data from Madagascar and has asserted that there will be a scientific review based on "global technical and ethical norms."[44]