Not to be confused with Anthoxanthin, a subclass of flavonoids.

Astaxanthin /æstəˈzænθɪn/ is a keto-carotenoid.[3][4] It belongs to a larger class of chemical compounds known as terpenes (as a tetraterpenoid) built from five carbon precursors, isopentenyl diphosphate, and dimethylallyl diphosphate. Astaxanthin is classified as a xanthophyll (originally derived from a word meaning "yellow leaves" since yellow plant leaf pigments were the first recognized of the xanthophyll family of carotenoids), but currently employed to describe carotenoid compounds that have oxygen-containing components, hydroxyl (-OH) or ketone (C=O), such as zeaxanthin and canthaxanthin. Indeed, astaxanthin is a metabolite of zeaxanthin and/or canthaxanthin, containing both hydroxyl and ketone functional groups.

Like many carotenoids, astaxanthin is a lipid-soluble pigment. Its red-orange colour is due to the extended chain of conjugated (alternating double and single) double bonds at the centre of the compound. This chain of conjugated double bonds is also responsible for the antioxidant function of astaxanthin (as well as other carotenoids) as it results in a region of decentralized electrons that can be donated to reduce a reactive oxidizing molecule.

Astaxanthin is a blood-red pigment and is produced naturally in the freshwater microalgae Haematococcus pluvialis and the yeast fungus Xanthophyllomyces dendrorhous (also known as Phaffia). When the algae is stressed by lack of nutrients, increased salinity, or excessive sunshine, it creates astaxanthin. Animals who feed on the algae, such as salmon, red trout, red sea bream, flamingos, and crustaceans (i.e. shrimp, krill, crab, lobster, and crayfish), subsequently reflect the red-orange astaxanthin pigmentation to various degrees.

The structure of astaxanthin by synthesis was described in 1975.[5] Astaxanthin is not converted to vitamin A in the human body so it is completely nontoxic if given orally.[clarification needed]

Astaxanthin can also be used as a dietary supplement intended for human, animal, and aquaculture consumption. The industrial production of astaxanthin comes from plant- or animal-based and synthetic sources. The U.S. Food and Drug Administration has approved astaxanthin as a food coloring (or color additive) for specific uses in animal and fish foods.[6] The European Commission considers it food dye and it is given the E number E161j.[7] Astaxanthin from algae, synthetic and bacterial sources, is generally recognized as safe (GRAS) by the FDA.[8][9] As a food color additive astaxanthin and astaxanthin dimethyldisuccinate are restricted for use in Salmonid fish feed only.[10] 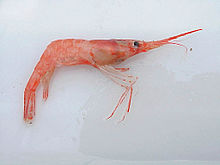 The shell and smaller parts of the bodily tissue of Pandalus borealis (Arctic shrimp) are colored red by astaxanthin, and are used and sold as an extractable source of astaxanthin. 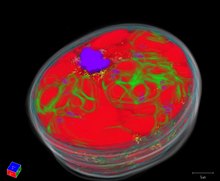 Krill also are used as an astaxanthin source.

Astaxanthin is present in most red-coloured aquatic organisms. The content varies from species to species, but also from individual to individual as it is highly dependent on diet and living conditions. Astaxanthin, and other chemically related asta-carotenoids, has also been found in a number of lichen species of the arctic zone.

The primary natural sources for industrial production of astaxanthin comprise the following:

Algae are the primary natural source of astaxanthin in the aquatic food chain. The microalgae Haematococcus pluvialis seems to accumulate the highest levels of astaxanthin in nature and is currently, the primary industrial source for natural astaxanthin production where more than 40 g of astaxanthin can be obtained from one kg of dry biomass.[citation needed] Haematococcus pluvialis has the productional advantage of the population doubling every week, which means scaling up is not an issue. Specifically, the microalgae are grown in two phases.[citation needed] First, in the green phase, the cells are given an abundance of nutrients to promote proliferation of the cells. In the subsequent red phase, the cells are deprived of nutrients and subjected to intense sunlight to induce encystment (carotogenesis), during which the cells produce high levels of astaxanthin as a protective mechanism against the environmental stress. The cells, with their high concentrations of astaxanthin, are then harvested.[11]

In shellfish, astaxanthin is almost exclusively concentrated in the shells, with only low amounts in the flesh itself, and most of it only becomes visible during cooking as the pigment separates from the denatured proteins that otherwise bind it. Astaxanthin is extracted from Euphausia superba (Antarctic krill)[12] and from shrimp processing waste. 12,000 pounds of wet shrimp shells can yield a 6–8 gallon astaxanthin/triglyceride oil mixture.[13] 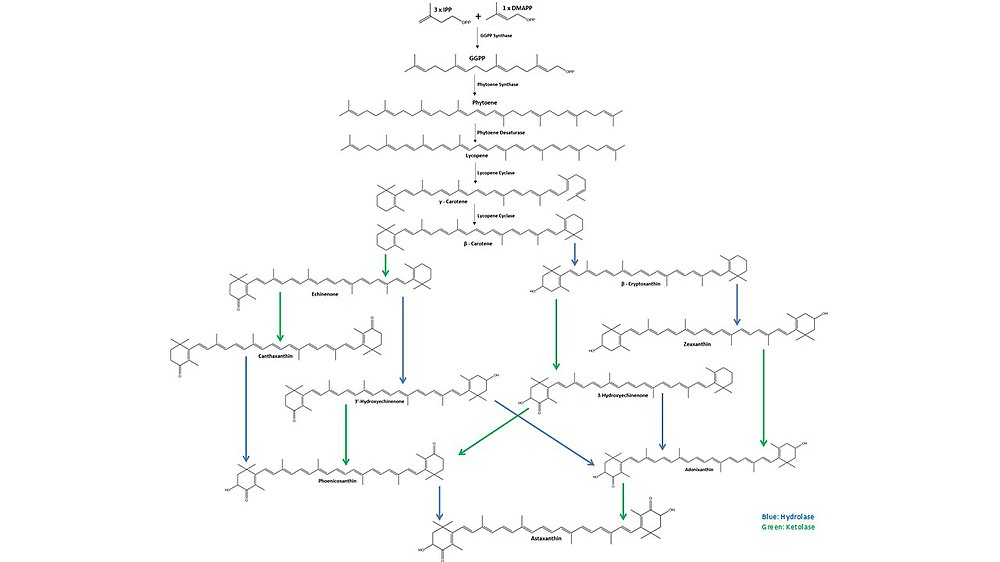 Astaxanthin biosynthesis starts with three molecules of isopentenyl pyrophosphate (IPP) and one molecule of dimethylallyl pyrophosphate (DMAPP) that are combined by IPP isomerase and converted to geranylgeranyl pyrophosphate (GGPP) by GGPP synthase. Two molecules of GGPP are then coupled by phytoene synthase to form phytoene. Next, phytoene desaturase creates four double bonds in the phytoene molecule to form lycopene. After desaturation, lycopene cyclase first forms γ-carotene by converting one of the ψ acyclic ends of the lycopene as a β-ring, then subsequently converts the other to form β-carotene. From β-carotene, hydrolases (blue) are responsible for the inclusion of two 3-hydroxy groups, and ketolases (green) for the addition of two 4-keto groups, forming multiple intermediate molecules until the final molecule, astaxanthin, is obtained.[14]

Nearly all commercially available astaxanthin for aquaculture is produced synthetically, with an annual turnover of over $200 million and a selling price of roughly $5000–6000 per kilo as of July 2012.[citation needed] The market grew to over $500 million by 2016 and is expected to continue to grow with the aquaculture industry.[15]

An efficient synthesis from isophorone, cis-3-methyl-2-penten-4-yn-1-ol and a symmetrical C10-dialdehyde has been discovered and is used in industrial production. It combines these chemicals together with an ethynylation and then a Wittig reaction.[16] Two equivalents of the proper ylide combined with the proper dialdehyde in a solvent of methanol, ethanol, or a mixture of the two, yields astaxanthin in up to 88% yields.[17]

Synthesis of astaxanthin by Wittig reaction

The cost of astaxanthin production, high market price and lack of a leading fermentation production systems, combined with the intricacies of chemical synthesis mean that research into alternative fermentation production methods has been carried out. Metabolic engineering offers the opportunity to create biological systems for the production of a specific target compound. The metabolic engineering of bacteria (Escherichia coli) recently allowed production of astaxanthin at >90% of the total carotenoids, providing the first engineered production system capable of efficient astaxanthin production.[18] Astaxanthin biosynthesis proceeds from beta-carotene via either zeaxanthin or canthaxanthin. Historically, it has been assumed that astaxanthin biosynthesis proceeds along both routes. However, recent work has suggested that efficient biosynthesis may, in fact, proceed from beta-carotene to astaxanthin via zeaxanthin.[19][20] The production of astaxanthin by metabolic engineering, in isolation, will not provide a suitable alternative to current industrial methods. Rather, a bioprocess approach should be adopted. Such an approach would consider fermentation conditions and economics, as well as downstream processing (extraction). Carotenoid extraction has been studied extensively, for example, the extraction of canthaxanthin (a precursor to astaxanthin) was studied within an E. coli production process demonstrating that extraction efficiency was increased substantially when two solvents, acetone and methanol, were used sequentially rather than as a combined solution.[21]

Astaxanthin exists in two predominant forms, non-esterified (yeast, synthetic) or esterified (algal) with various length fatty acid moieties whose composition is influenced by the source organism as well as growth conditions. The astaxanthin fed to salmon to enhance flesh coloration is in the non-esterified form [23] The predominance of evidence supports a de-esterification of fatty acids from the astaxanthin molecule in the intestine prior to or concomitant with absorption resulting in the circulation and tissue deposition of non-esterified astaxanthin. European Food Safety Authority (EFSA) published a scientific opinion on a similar xanthophyll carotenoid, lutein, stating that “following passage through the gastrointestinal tract and/or uptake lutein esters are hydrolyzed to form free lutein again”.[24] While it can be assumed that non-esterified astaxanthin would be more bioavailable than esterified astaxanthin due to the extra enzymatic steps in the intestine needed to hydrolysis the fatty acid components, several studies suggest that bioavailability is more dependent on formulation than configuration.[25][26]

Astaxanthin is used as a dietary supplement and feed supplement as food colorant for salmon, crabs, shrimp, chickens and egg production.[27][28]

The primary use of synthetic astaxanthin today is as an animal feed additive to impart coloration, including farm-raised salmon and chicken egg yolks.[29] Synthetic carotenoid pigments colored yellow, red or orange represent about 15–25% of the cost of production of commercial salmon feed.[30] Today, almost all commercial astaxanthin for aquaculture is produced synthetically.[31]

Class action lawsuits were filed against some major grocery store chains for not clearly labeling the astaxanthin-treated salmon as "color added".[32] The chains followed up quickly by labeling all such salmon as "color added". Litigation persisted with the suit for damages, but a Seattle judge dismissed the case, ruling that enforcement of the applicable food laws was up to government and not individuals.[33]

The primary human application for astaxanthin is as a dietary supplement, although as of 2018, there was insufficient evidence from medical research to show that it affects disease risk or health of people, and it remains under preliminary research. In 2018, the European Food Safety Authority sought scientific information from manufacturers of dietary supplements about the safety of astaxanthin.[34]

Role in the food chain[edit]

Lobsters, shrimp, and some crabs turn red when cooked because the astaxanthin, which was bound to the protein in the shell, becomes free as the protein denatures and unwinds. The freed pigment is thus available to absorb light and produce the red color.[35]

In April 2009, the United States Food and Drug Administration approved astaxanthin as an additive for fish feed only as a component of a stabilized color additive mixture. Color additive mixtures for fish feed made with astaxanthin may contain only those diluents that are suitable.[6] The color additives astaxanthin, ultramarine blue, canthaxanthin, synthetic iron oxide, dried algae meal, Tagetes meal and extract, and corn endosperm oil are approved for specific uses in animal foods.[36] Haematococcus algae meal (21 CFR 73.185) and Phaffia yeast (21 CFR 73.355) for use in fish feed to color salmonoids were added in 2000.[37][38][39] In the European Union, astaxanthin-containing food supplements derived from sources that have no history of use as a source of food in Europe, fall under the remit of the Novel Food legislation, EC (No.) 258/97. Since 1997, there have been five novel food applications concerning products that contain astaxanthin extracted from these novel sources. In each case, these applications have been simplified or substantial equivalence applications, because astaxanthin is recognised as a food component in the EU diet.[40][41][42][43]