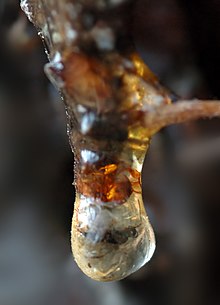 Solidified resin from which the volatile terpenes have been removed by distillation is known as rosin. Typical rosin is a transparent or translucent mass, with a vitreous fracture and a faintly yellow or brown colour, non-odorous or having only a slight turpentine odour and taste. Rosin is insoluble in water, mostly soluble in alcohol, essential oils, ether, and hot fatty oils. Rosin softens and melts when heated and burns with a bright but smoky flame.

Rosin consists of a complex mixture of different substances including organic acids named the resin acids. Related to the terpenes, resin acid is oxidized terpenes. Resin acids dissolve in alkalis to form resin soaps, from which the resin acids are regenerated upon treatment with acids. Examples of resin acids are abietic acid (sylvic acid), C20H30O2, plicatic acid contained in cedar, and pimaric acid, C20H30O2, a constituent of galipot resin. Abietic acid can also be extracted from rosin by means of hot alcohol. Pimaric acid closely resembles abietic acid into which it passes when distilled in a vacuum; it has been supposed to consist of three isomers.[by whom?] 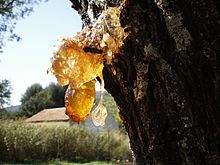 The material dripping from an almond tree looks confusingly like resin, but actually is a gum or mucilage, and chemically very different. 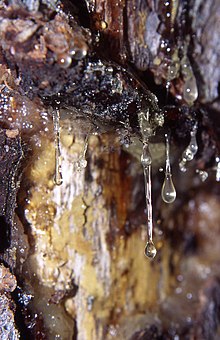 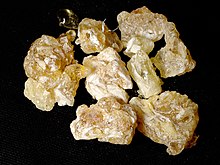