waxy transparent aromatic organic compound
Not to be confused with samphor.
For other uses, see Camphor (disambiguation).

Camphor (/ˈkæmfər/) is a waxy, flammable, transparent solid with a strong aroma.[5] It is a terpenoid with the chemical formula C10H16O. It is found in the wood of the camphor laurel (Cinnamomum camphora), a large evergreen tree found in East Asia, also of the unrelated kapur tree (Dryobalanops sp.), a tall timber tree from South East Asia. It also occurs in some other related trees in the laurel family, notably Ocotea usambarensis. Rosemary leaves (Rosmarinus officinalis) contain 0.05 to 0.5% camphor,[6] while camphorweed (Heterotheca) contains some 5%.[7] A major source of camphor in Asia is camphor basil (the parent of African blue basil). Camphor can also be synthetically produced from oil of turpentine.

The molecule has two possible enantiomers as shown in the structural diagrams. The structure on the left is the naturally occurring (+)-camphor ((1R,4R)-bornan-2-one), while its mirror image shown on the right is the (−)-camphor ((1S,4S)-bornan-2-one).

It is used for its scent, as an embalming fluid, topical medication, and manufacturing chemical, and in religious ceremonies.

The word camphor derives from the French word camphre, itself from Medieval Latin camfora, from Arabic kāfūr, from Tamil கருப்பூரம், from Austroasiatic languages – Khmer kāpōr / kapū, Mon khapuiw, ultimately from an Austronesian source – Malay kapur,[8] or Sanskrit Karpur. Camphor is used in India from ancient time in Hinduism as offering to Deities by burning it. It was first used by Hindus from very ancient times and called "Karpoora Aarathi", also when Buddhism and Jainism flourished. However, Suśruta and later kāvya literature mention this word. In Old Malay it is known as kapur Barus, which means "the chalk of Barus". Barus was the name of an ancient port located near modern Sibolga city on the western coast of Sumatra island.[9] This port traded in camphor extracted from laurel trees (Cinnamonum camphora) that were abundant in the region. Even now, the local tribespeople and Indonesians in general refer to aromatic naphthalene balls and moth balls as kapur Barus. 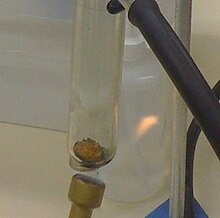 A sample of sublimed camphor

Camphor has been produced as a forest product for centuries, condensed from the vapor given off by the roasting of wood chips cut from the relevant trees, and later by passing steam through the pulverized wood and condensing the vapors.[10] By the early 19th century most camphor tree reserves had been depleted with the remaining large stands in Japan and Taiwan with Taiwanese production greatly exceeding Japanese. Camphor was one of the primary resources extracted by Taiwan’s colonial powers as well as one of the most lucrative. First the Chinese and then the Japanese established monopolies on Taiwanese camphor. In 1868 a British naval force sailed into Anping harbor and the local British representative demanded the end of the Chinese camphor monopoly, after the local Qing representative refused the British bombarded the town and took the harbor. The "camphor regulations” negotiated between the two sides subsequently saw a brief end to the camphor monopoly.[11] When its use in the nascent chemical industries (discussed below) greatly increased the volume of demand in the late 19th century, potential for changes in supply and in price followed. In 1911 Robert Kennedy Duncan, an industrial chemist and educator, related that the Imperial Japanese government had recently (1907–1908) tried to monopolize the production of natural camphor as a forest product in Asia but that the monopoly was prevented by the development of the total synthesis alternatives,[12] which began in "purely academic and wholly uncommercial"[12] form with Gustav Komppa's first report "but it sealed the fate of the Japanese monopoly […] For no sooner was it accomplished than it excited the attention of a new army of investigators—the industrial chemists. The patent offices of the world were soon crowded with alleged commercial syntheses of camphor, and of the favored processes companies were formed to exploit them, factories resulted, and in the incredibly short time of two years after its academic synthesis artificial camphor, every whit as good as the natural product, entered the markets of the world […]."[12]:133–134 "...And yet artificial camphor does not—and cannot—displace the natural product to an extent sufficient to ruin the camphor-growing industry. Its sole present and probable future function is to act as a permanent check to monopolization, to act as a balance-wheel to regulate prices within reasonable limits." This ongoing check on price growth was confirmed in 1942 in a monograph on DuPont's history, where William S. Dutton said, "Indispensable in the manufacture of pyroxylin plastics, natural camphor imported from Formosa and selling normally for about 50 cents a pound, reached the high price of $3.75 in 1918 [amid the global trade disruption and high explosives demand that World War I created]. The organic chemists at DuPont replied by synthesizing camphor from the turpentine of Southern pine stumps, with the result that the price of industrial camphor sold in carload lots in 1939 was between 32 cents and 35 cents a pound."[13]:293

The background of Gustaf Komppa's synthesis was as follows. In the 19th century, it was known that nitric acid oxidizes camphor into camphoric acid. Haller and Blanc published a semisynthesis of camphor from camphoric acid. Although they demonstrated its structure, they were unable to prove it. The first complete total synthesis of camphoric acid was published by Komppa in 1903. Its inputs were diethyl oxalate and 3,3-dimethylpentanoic acid, which reacted by Claisen condensation to yield diketocamphoric acid. Methylation with methyl iodide and a complicated reduction procedure produced camphoric acid. William Perkin published another synthesis a short time later. Previously, some organic compounds (such as urea) had been synthesized in the laboratory as a proof of concept, but camphor was a scarce natural product with a worldwide demand. Komppa realized this. He began industrial production of camphor in Tainionkoski, Finland, in 1907 (with plenty of competition, as Kennedy Duncan reported).

Camphor can be produced from alpha-pinene, which is abundant in the oils of coniferous trees and can be distilled from turpentine produced as a side product of chemical pulping. With acetic acid as the solvent and with catalysis by a strong acid, alpha-pinene readily rearranges into camphene, which in turn undergoes Wagner–Meerwein rearrangement into the isobornyl cation, which is captured by acetate to give isobornyl acetate. Hydrolysis into isoborneol followed by oxidation gives racemic camphor. By contrast, camphor occurs naturally as D-camphor, the (R)-enantiomer.

Camphor can also be reduced to isoborneol using sodium borohydride.

In 1998, K. Chakrabarti and coworkers from the Indian Association for the Cultivation of Science, Kolkata, prepared diamond thin film using camphor as the precursor for chemical vapor deposition.[14]

The sublimating capability of camphor gives it several uses.

The first significant manmade plastics were low-nitrogen (or "soluble") nitrocellulose (pyroxylin) plastics. In the early decades of the plastics industry, camphor was used in immense quantities[12]:130 as the plasticizer that creates celluloid from nitrocellulose, in nitrocellulose lacquers and other plastics and lacquers.

Camphor is believed to be toxic to insects and is thus sometimes used as a repellent.[16] Camphor is used as an alternative to mothballs. Camphor crystals are sometimes used to prevent damage to insect collections by other small insects. It is kept in clothes used on special occasions and festivals, and also in cupboard corners as a cockroach repellent. The smoke of camphor crystal or camphor incense sticks can be used as an environmentally-friendly mosquito repellent.[17]

Recent studies have indicated that camphor essential oil can be used as an effective fumigant against red fire ants, as it affects the attacking, climbing, and feeding behavior of major and minor workers.[18]

Camphor is also used as an antimicrobial substance. In embalming, camphor oil was one of the ingredients used by ancient Egyptians for mummification.[19]

Solid camphor releases fumes that form a rust-preventative coating and is therefore stored in tool chests to protect tools against rust.[citation needed]

In the ancient Arab world, camphor was a common perfume ingredient, according to the Perfume Handbook.[20] The Chinese referred to the best camphor as "dragon's brain perfume," due to its "pungent and portentous aroma" and "centuries of uncertainty over its provenance and mode of origin."[21]

One of the earliest known recipes for ice cream dating to the Tang dynasty includes camphor as an ingredient.[22] In ancient and medieval Europe, camphor was used as an ingredient in sweets. It was used in a wide variety of both savory and sweet dishes in medieval Arabic language cookbooks, such as al-Kitab al-Ṭabikh compiled by ibn Sayyâr al-Warrâq in the 10th century.[23] It also was used in sweet and savory dishes in the Ni'matnama, according to a book written in the late 15th century for the sultans of Mandu.[24]

Camphor is commonly applied as a topical medication as a skin cream or ointment to relieve itching from insect bites, minor skin irritation, or joint pain.[25] It is absorbed in the skin epidermis,[25] where it stimulates nerve endings sensitive to heat and cold, producing a warm sensation when vigorously applied, or a cool sensation when applied gently.[26][27][28] The action on nerve endings also induces a slight local analgesia.[29]

Camphor is also used as an aerosol, typically by steam inhalation, to inhibit coughing and relieve upper airway congestion due to the common cold.[30]

Camphor has limited use in veterinary medicine as a respiratory stimulant for horses.[35]

Camphor was used by Ladislas J. Meduna to induce seizures in schizophrenic patients.[36]

Camphor has been used in traditional medicine over centuries, probably most commonly as a decongestant.[26] Camphor was used in ancient Sumatra to treat sprains, swellings, and inflammation.[37] Camphor also was used for centuries in traditional Chinese medicine for various purposes.[26]

It has also been used in India since ancient times.

Camphor is a parasympatholytic agent which acts as a non-competitive nicotinic antagonist at nAChRs.[38][39]

Camphor is widely used in Hindu religious ceremonies. It is put on a stand called 'karpur dāni' in India. Aarti is performed after setting fire to it usually as the last step of puja.[40]