Umbellulone is a headache-inducing monoterpene ketone found in the leaves of the tree Umbellularia californica, sometimes known as the "headache tree".[1][2]

It is hypothesized to cause headaches by influencing the trigeminovascular system via TRPA1.[1] 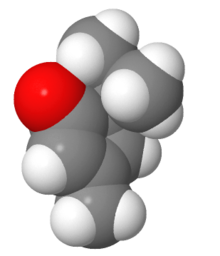 Umbellularia californica is a tree native to the coastal forest of California.

Menzies was the first to collect the oil at the end of the 18th century. In 1826 this tree was classified as a laurel, Laurus regia, by Douglass. He probably intended to indicate the beauty and splendor of the tree.[original research?]

In 1833 the tree got another classification by Hooker and Arnott, Tetranthera californica. Shortly after that the present name was given by Nuttal, Umbellularia californica. In 1875 Heaney obtained a colorless liquid (Oreodaphenol) via fractionation under reduced pressure. This oil of the California laurel possess a pungent odor.

Stillman (1880) did a fractionation at 215-216 °C. He discovered that inhalation of its fumes can lead to a painful cold sensation and severe headaches. In earlier times the leaves of the tree were used for cures for headaches or stomachaches and even toothaches.

Powers and Lee did in 1904 another fractionation on the oil of the tree at 217-222 °C. This yielded different compounds: pinene, cineol, eugenol, methyl eugenol and a ketone called umbellulone. Umbellulone is the chemical responsible for the headaches induced by the tree. They gave umbellulone the following structural formula (Fig. 1).

Figure 1: Strucutural formula according to Powers and Lee, 1904.

This was corrected later that year by Semmller; he gave the structural formula which is accepted today (Fig. 2B).

Umbellulone is a monoterpene ketone that is found in the leaves of Umbellularia californica. The formula of umbellulone is C10H14O, containing a cyclopropane and cyclopentane ring. There is only one isomer of umbellulone known. Umbellulone is a lipophilic liquid (oil) at room temperature. The boiling point of umbellulone is 220 °C and the vapor pressure is 0.159 mm/Hg. Umbellulone has a high-affinity binding for thiols. The molecule is reactive with most of the thiols, but not with all.[1] The reaction between the thiol cysteamine and umbellulone, is given in figure 3. A European registered medicine called Cystagon® or Procysbi® contains cysteamine, which can interact with umbellulone.

Figure 3: Reaction between cysteamine and umbellulone. 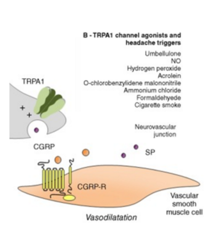 Umbellulone can cause severe headaches by activating transient receptor potential cation channel, subfamily A, member 1 (TRPA1) and influencing the trigeminovascular system via calcitonin gene-related peptide (CGRP). Once inhaled, umbellulone will diffuse from the nasal mucosa into the blood circulation. Because of the high lipid solubility of umbellulone, the molecule will quickly pass through the epithelial cells and will quickly be absorbed in the blood. From there on, umbellulone is able to reach the perivascular sensory nerve endings of the meningeal vessels. Stimulation of these nerve fibers will eventually lead to the release of CGRP, a nociceptor known for its ability to induce migraine and cluster headache attacks.[1]

Activation of TRPA1 by umbellulone results in the opening of this ion channel. Calcium will enter the cell and the cell membrane will be depolarised. Depolarisation of the membrane will result in the release of CGRP1. Released CGRP can bind to its CGRP-receptor. This will induce a CGRP-dependent local vasodilation (Fig. 4) of the cerebral blood vessels. Vasodilation of the cerebral blood vessels will increase the blood flow to the brain's outer membranes. CGRP binding to its receptor will also promote mast cell degranulation and infiltration by neutrophils and other immune cells. The increase in immune cells and its inflammatory response is thought to be the main cause of the occurrence of migraine. Its is still being discussed if vasodilation of the cerebral blood vessels contributes to the cause of the migraine and headaches. Still, the vasodilatory effect and the blood flow increase can be used as an indirect indication for the release of CGRP and therefore for the presence of the migraine and headaches.

Transient receptor potential cation channel, subfamily M, member 8 (TRPM8) is an ion channel that is able to induce an intensely cold sensation when activated. Menthol is the primary ligand of TRPM8, but since umbellulone has some structural similarities with menthol, umbellulone is also able to activate TRPM8. But this is a weak interaction.

Exposure to umbellularia is likely to result in an intense cold sensation in the nasal cavity. When combined with a headache, an increase in plasma CGRP or irritation of the eyes, the possibility for the person to have been exposed to umbellulone increases.

The oil of Umbellularia californica contains 40% to 60% of umbellulone. It possesses an effect similar to atropine on the nerves and muscle fibers. Contact with the oil, or exposure to the vapors, can cause:

Umbellulone induces rapid production of methemoglobine. Methemoglobine is a globin in the blood which mainly consists of ferric (Fe3+) haemoglobin instead of the usual ferrous (Fe2+) haemoglobin. Methemoglobin has a decreased ability to bind oxygen. But in combination with the 3 other ferrous irons on the hemoglobin unit, the oxygen release is also decreased. Red blood cells will be less able to nurture organs with oxygen. Therefore, the probability for a hypoxia increases. Methemoglobin lethality is possible at concentrations higher than 50% of the substance in red blood cells.

Umbellularia californica should not be mistaken for the conventional bay leaf (Laurus nobilis), which is devoid of these toxic effects.

In 2013 a new possible application of Umbellularia californica came to light. The essential oil was used for its mosquito biting deterrent and larvicidal activity. This encourages further investigation of this oil. Not only as a natural repellent for other arthropods, but also for medical and veterinary importance. This could lead to a new molecular-based approach to ethnopharmacological investigation of essential oils for pest control.[citation needed][1]