Lactarius deliciosus, commonly known as the saffron milk cap and red pine mushroom, is one of the best known members of the large milk-cap genus Lactarius in the order Russulales. It is found in Europe and has been accidentally introduced to other countries under conifers and can be found growing in pine plantations. A fresco in the Roman town of Herculaneum appears to depict Lactarius deliciosus and is one of the earliest pieces of art to illustrate a fungus.[2][3]

This was known to Linnaeus who officially described it in Volume Two of his Species Plantarum in 1753, giving it the name Agaricus deliciosus,[4] the specific epithet deriving from Latin deliciosus meaning "tasty".[5] The Swedish taxonomist allegedly gave the species its epithet after smelling it and presuming it tasted as good as a Mediterranean milk cap highly regarded for its flavor.[6] Dutch mycologist Christian Hendrik Persoon added the varietal epithet lactifluus in 1801, before English mycologist Samuel Frederick Gray placed it in its current genus Lactarius in 1821 in his The Natural Arrangement of British Plants.[7]

It is commonly known as saffron milk-cap, red pine mushroom, or simply pine mushroom in English. An alternative North American name is orange latex milky.[8] Its Spanish name varies (níscalo, nícalo, robellón...).[9] Its Catalan name is rovelló (pl. rovellons). In the Girona area, it is called a pinatell (in Catalan) because it is collected near wild pine trees; it is typically harvested in October following the late August rains. Both this and Lactarius deterrimus are known as Çam melkisi or Çintar in Turkey.[10][11] In Romania, it is known as Rascovi and it can be found in the northern regions in autumn season.

Lactarius deliciosus has a carrot orange cap that is convex to vase shaped, inrolled when young, 4 to 14 centimetres (1 1⁄2 to 5 1⁄2 inches) across, often with darker orange lines in the form of concentric circles. The cap is sticky and viscid when wet, but is often dry. It has crowded decurrent gills and a squat orange stipe that is often hollow, 3 to 8 cm (1 to 3 in) long and 1 to 2 cm (1⁄2 to 1 in) thick. This mushroom stains a deep green color when handled. When fresh, the mushroom exudes an orange-red latex or "milk" that does not change color.

In North America, this mushroom is often confused with Lactarius rubrilacteus, which stains blue, exudes a red latex, and is also edible.

Lactarius deliciosus grows under conifers on acidic soils and forms a mycorrhizal relationship with its host tree. It is native to the southern Pyrenees where it grows under Mediterranean pines, as well as throughout the Mediterranean basin in Portugal, Bulgaria, Spain, Greece, Italy, Cyprus, France and elsewhere. Both this fungus and L. deterrimus are collected and sold in the İzmir Province of southwestern Turkey, and the Antalya Province of the south coast.[10][11] In the island of Cyprus, large numbers of Lactarius deliciosus are found in the high altitude Pinus nigra and Pinus brutia forests of the Troodos mountain range, where locals hunt them with vigour, as this fungus is highly esteemed among the local delicacies.[12]

After analysing DNA from collections around the world, mycologists Jorinde Nuytinck, Annemieke Verbeken, and Steve Miller have concluded that L. deliciosus is a distinct European species that differs genetically, morphologically, and ecologically from populations in North America or Central America.[13] It has been reportedly introduced to Chile, Australia and New Zealand, where it grows in Pinus radiata plantations. Popular places for collecting this mushroom, especially among the Polish community, are around Macedon in Victoria, Mt Crawford in the Adelaide Hills and in the Oberon area in New South Wales, Australia, where they can grow to the size of a dinner plate. Many people of Italian, Polish, Ukrainian and other eastern European ancestry in the states of Victoria and New South Wales, Australia travel to collect these mushrooms after autumn rainfall around Easter time.

Lactarius deliciosus is also very popular in Russian cuisine, and Siberian pine forests are a favourable habitat of this species. The mushrooms are being collected in August to early October, where they are traditionally fried, salted or pickled. 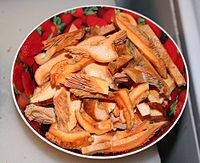 Lactarius deliciosus is a widely collected mushroom in the Iberian peninsula. It is used in Spanish cuisine, being probably the most sought after wild mushroom in the country. One recipe recommends they should be lightly washed, fried whole cap down in olive oil with a small amount of garlic and served drenched in raw olive oil and parsley. The same recipe advises that butter should never be used when cooking this mushroom.[citation needed]

Further north and east it is a feature of Provençal cuisine.[14] They are also collected in Poland, where they are traditionally served fried in butter, with cream, or marinated. In Cyprus, saffron milk caps are usually grilled on the charcoal and then dressed in olive oil and lemon or bitter orange, they are sautéed with onions, or sometimes stewed with onions, coriander and red wine. In Russian cuisine these mushrooms are traditionally preserved by salting.

In India, the fungus is one of the ten most widely consumed mushrooms by ethnic tribes of Meghalaya.[15]

In most field guides, the saffron milk cap is considered an excellent mushroom, having 'a crisp texture'. Some authors, however, hold Lactarius sanguifluus in higher esteem than its pretender, Lactarius deliciosus. Legend has it that when naming the mushroom, Carl Linnaeus had in fact mistaken it with Lactarius sanguifluus, giving it the epithet "delicious".

High consumption of Lactarius deliciosus could cause the urine to discolor to orange/red.[16]

When grown in liquid culture, the mycelium of Lactarius deliciosus produces a mixture of fatty acids and various compounds such as chroman-4-one, anofinic acid, 3-hydroxyacetylindole, ergosterol, and cyclic dipeptides.[17]