This article is about the chemical concept. For "isomerism" of atomic nuclei, see nuclear isomer.

In chemistry, isomers are ions or molecules with identical formulas but distinct structures [1] Isomers do not necessarily share similar properties. Two main forms of isomerism are structural isomerism (or constitutional isomerism) and stereoisomerism (or spatial isomerism). 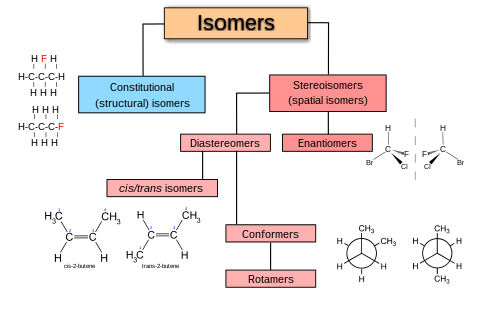 Structural isomers differ in terms of the connectivity of some or all constituent atoms.[2]

A simple example of isomerism is given by propanol: It has the formula C3H8O (or C3H7OH) and occurs as two isomers: propan-1-ol (n-propyl alcohol; I) and propan-2-ol (isopropyl alcohol; II)

These two molecules are position isomers of each other, because the position of the hydroxy group differs between the two: It is attached to an end carbon in the first isomer, and to the center carbon in the second.

Another isomer of C3H8O: methoxyethane (ethyl-methyl-ether; III). Unlike the isomers of propanol, methoxyethane has an oxygen connected to two carbons rather than to one carbon and one hydrogen. Methoxyethane is an ether, not an alcohol, because it lacks a hydroxyl group, and it has chemical properties more similar to other ethers than to either of the above alcohol isomers.

Tautomers are structural isomers which readily interconvert, so that two or more species co-exist in equilibria such as H–X–Y=Z ⇌ X=Y–Z–H.[3] Important examples are keto-enol tautomerism and the equilibrium between neutral and zwitterionic forms of an amino acid.

E/Z isomers, which have restricted rotation at a double bond, are configurational isomers. They are classified as diastereomers.[4] E/Z notation depicts absolute stereochemistry, which is an unambiguous descriptor based on CIP priorities.

"Cis–trans isomers" are used to describe any molecules with restricted rotation in the molecule. For alkenes, these descriptors describe relative stereochemistry so can be ambiguous. This terminology is especially problematic for double bonds that have more than two substituents. An obsolete term for cis–trans isomerism is "geometric isomerism".[5] For alkenes with more than two substituents, E-Z notation is used instead of cis and trans. If possible, E and Z (written in italic type) is also preferred in compounds with two substituents.[6]

Cis and trans isomers also occur in inorganic coordination compounds, such as square planar MX2Y2 complexes and octahedral MX4Y2 complexes. A related type of geometric isomerism is facial–meridional (fac-mer) isomerism in octahedral MX3Y3 complexes, in which each set of three identical ligands either occupies one face of the octahedron or is situated on one meridian of the octahedron.

Although conformers can be referred to as stereoisomers, they are rarely isolable in pure form.

While structural isomers typically have distinct chemical properties, stereoisomers behave identically in most chemical reactions, except in their reaction with other stereoisomers. Enzymes, however, can distinguish between enantiomers of a compound.

Enantiomers differ in the sign of their optical rotation of polarized light, and are therefore sometimes described as optical isomers.[7][8] However this term is ill-defined and has also been used to describe other stereoisomers as well as enantiomers.[9] Its use is therefore strongly discouraged and the molecules should instead be described as either enantiomers or diastereomers as appropriate.[10][9]

Isomerization is the process by which one molecule is transformed into another molecule that has exactly the same atoms, but the atoms are rearranged.[11] In some molecules and under some conditions, isomerization occurs spontaneously. Many isomers are equal or roughly equal in bond energy, and so exist in roughly equal amounts, provided that they can interconvert relatively freely, that is the energy barrier between the two isomers is not too high. When the isomerization occurs intramolecularly, it is considered a rearrangement reaction.

An example of an organometallic isomerization is the production of decaphenylferrocene, [(η5-C5Ph5)2Fe] from its linkage isomer.[12][13]

Industrial synthesis of fumaric acid proceeds via the cis-trans isomerization of maleic acid:

Isomers having distinct biological properties are common; for example, the placement of methyl groups. In substituted xanthines, theobromine, found in chocolate, is a vasodilator with some effects in common with caffeine; but, if one of the two methyl groups is moved to a different position on the two-ring core, the isomer is theophylline, which has a variety of effects, including bronchodilation and anti-inflammatory action. Another example of this occurs in the phenethylamine-based stimulant drugs. Phentermine is a non-chiral compound with a weaker effect than that of amphetamine. It is used as an appetite-reducing medication and has mild or no stimulant properties. However, an alternate atomic arrangement gives dextromethamphetamine, which is a stronger stimulant than amphetamine.

In medicinal chemistry and biochemistry, enantiomers are a special concern because they may possess distinct biological activity. Many preparative procedures afford a mixture of equal amounts of both enantiomeric forms. In some cases, the enantiomers are separated by chromatography using chiral stationary phases. They may also be separated through the formation of diastereomeric salts. In other cases, enantioselective synthesis have been developed.

As an inorganic example, cisplatin (see structure above) is an important drug used in cancer chemotherapy, whereas the trans isomer (transplatin) has no useful pharmacological activity.

Isomerism was first observed in 1827, when Friedrich Wöhler prepared silver cyanate and discovered that, although its elemental composition of AgCNO was identical to silver fulminate (prepared by Justus von Liebig the previous year),[14] its properties were distinct. This finding challenged the prevailing chemical understanding of the time, which held that chemical compounds could be distinct only when their elemental compositions differ. After additional discoveries of the same sort were made, such as Wöhler's 1828 discovery that urea has the same atomic composition (CH4N2O) as the chemically distinct ammonium cyanate, Jöns Jacob Berzelius introduced the term isomerism in 1830 to describe the phenomenon.[15] The isomeric pairs are as follows:

In 1848, Louis Pasteur separated tartaric acid into tiny crystals of its two mirror-image forms.[16][17] The individual molecules of each were the left and right optical stereoisomers, solutions of which rotate the plane of polarized light to the same degree but in opposite directions.

Other types of isomerism exist. In general, topological isomers called topoisomers are large molecules that wind about and form knots or loops. Molecules with topoisomers include catenanes and DNA. Topoisomerase enzymes can knot DNA and thus change its topology. There are also isotopomers or isotopic isomers that have the same numbers of each type of isotopic substitution but in chemically different positions. In nuclear physics, nuclear isomers are excited states of atomic nuclei. Spin isomers have differing distributions of spin among their constituent atoms.