This article is about the fruit. For other uses, see Grapefruit (disambiguation).
citrus fruit

The grapefruit (Citrus × paradisi) is a subtropical citrus tree known for its relatively large sour to semi-sweet, somewhat bitter fruit.[1] Grapefruit is a citrus hybrid originating in Barbados as an accidental cross between the sweet orange (C. sinensis) and pomelo (or shaddock; C. maxima), both of which were introduced from Asia in the seventeenth century.[2] When found, it was nicknamed the "forbidden fruit".[1] Frequently, it is misidentified as the very similar parent species, pomelo.[3]

The grape part of the name alludes to clusters of fruit on the tree that often appear similar to grape clusters.[4] The interior flesh is segmented and varies in color from white to yellow to red to pink.

The evergreen grapefruit trees usually grow to around 5–6 meters (16–20 ft) tall, although they may reach 13–15 m (43–49 ft).[1] The leaves are glossy, dark green, long (up to 15 centimeters (5.9 in)), and thin. It produces 5 cm (2 in) white four-petaled flowers. The fruit is yellow-orange skinned and generally, an oblate spheroid in shape; it ranges in diameter from 10–15 cm (3.9–5.9 in). The flesh is segmented and acidic, varying in color depending on the cultivars, which include white, pink, and red pulps of varying sweetness (generally, the redder varieties are the sweetest).[1] The 1929 U.S. Ruby Red[1] (of the Redblush variety) has the first grapefruit patent.[5]

The genetic origin of the grapefruit is a hybrid mix.[6] One ancestor of the grapefruit was the Jamaican sweet orange (Citrus sinensis), itself an ancient hybrid of Asian origin; the other was the Indonesian pomelo (C. maxima).[1] One story of the fruit's origin is that a certain "Captain Shaddock"[1][7] brought pomelo seeds to Jamaica and bred the first fruit,[8] although it probably originated as a naturally occurring hybrid between the two plants some time after they had been introduced there.[1][2]

The Trunk, Leaves, and Flowers of this Tree, very much resemble
those of the Orange-tree.
The Fruit, when ripe, is something longer and larger than the largest
Orange; and exceeds, in the Delicacy of its Taste, the Fruit of every
Tree in this or any of our neighbouring Islands.
It hath somewhat of the Taste of a Shaddock; but far exceeds that, as
well as the best Orange, in its delicious Taste and Flavour.

The hybrid fruit, then called "the forbidden fruit", was first documented in 1750 by a Welshman, Rev. Griffith Hughes, who described specimens from Barbados in The Natural History of Barbados.[1][9][10] Currently, the grapefruit is said to be one of the "Seven Wonders of Barbados".[11]

The grapefruit was brought to Florida by Count Odet Philippe in 1823 in what is now known as Safety Harbor.[1] Further crosses have produced the tangelo (1905), the Minneola tangelo (1931), and the oroblanco (1984).

The grapefruit was known as the shaddock or shattuck until the nineteenth century.[1][7] Its current name alludes to clusters of the fruit on the tree, which often appear similar to that of grapes.[4] Botanically, it was not distinguished from the pomelo until the 1830s, when it was given the name Citrus paradisi. Its true origins were not determined until the 1940s. This led to the official name being altered to Citrus × paradisi, the "×" identifying its hybrid origin.[12][13] 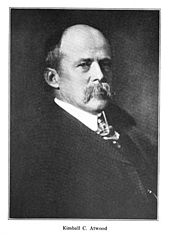 An early pioneer in the American citrus industry was Kimball Atwood, a wealthy entrepreneur who founded the Atwood Grapefruit Company in the late nineteenth century. The Atwood Grove became the largest grapefruit grove in the world, with a yearly output of 80,000 boxes of fruit.[14] It was there that pink grapefruit was first discovered in 1906.[15]

The 1929 Ruby Red (or Redblush) patent was associated with real commercial success, which came after the discovery of a red grapefruit growing on a pink variety.[1] Using radiation to trigger mutations, new varieties were developed to retain the red tones which typically faded to pink.[16] The Rio Red variety is the current (2007) Texas grapefruit with registered trademarks Rio Star and Ruby-Sweet, also sometimes promoted as "Reddest" and "Texas Choice". The Rio Red is a mutation bred variety that was developed by treatment of bud sticks with thermal neutrons. Its improved attributes of mutant variety are fruit and juice color, deeper red, and wide adaptation.[17]

The Star Ruby is the darkest of the red varieties.[1] Developed from an irradiated Hudson grapefruit,[18] it has found limited commercial success because it is more difficult to grow than other varieties.[19][20]

In 2018, world production of grapefruits (combined with pomelos) was 9.4 million tonnes, led by China with 53% of the world total. Secondary producers were Vietnam and the United States.[22]

Grapefruit mercaptan, a sulfur-containing terpene, is one of the aroma compounds influencing taste and odor of grapefruit, compared with other citrus fruits.[24]

Grapefruit and grapefruit juice have been found to interact with numerous drugs and in many cases, to result in adverse direct and/or side effects (if dosage is not carefully adjusted.)[25]

This happens in two very different ways. In the first, the effect is from bergamottin, a natural furanocoumarin in both grapefruit flesh and peel that inhibits the CYP3A4 enzyme (among others from the P450 enzyme family responsible for metabolizing 90% of drugs). The action of the CYP3A4 enzyme itself is to metabolize many medications.[26][27] If the drug's breakdown for removal is lessened, then the level of the drug in the blood may become too high or stay too long, leading to adverse effects.[27] On the other hand, some drugs must be broken down to become active, and inhibiting CYP3A4 may lead to reduced drug effects.

The other effect is that grapefruit can block the absorption of drugs in the intestine.[27] If the drug is not absorbed, then not enough of it is in the blood to have a therapeutic effect.[27] Each affected drug has either a specific increase of effect or decrease.

One whole grapefruit, or a glass of 200 mL (6.8 US fl oz) of grapefruit juice may cause drug overdose toxicity.[28] Typically, drugs that are incompatible with grapefruit are so labeled on the container or package insert.[27] People taking drugs should ask their health care provider or pharmacist questions about grapefruit and drug interactions.[27]

Raw grapefruit is 90% water, 8% carbohydrates, 1% protein, and contains negligible fat (table). In a 100 gram reference amount, raw grapefruit provides 33 calories and is a rich source of vitamin C (40% of the Daily Value), with no other micronutrients in significant content.

Grapefruit juice contains about half the citric acid of lime or lemon juice, and about 50% more citric acid than orange juice.[29]

In Costa Rica, especially in Atenas, grapefruit are often cooked to remove their sourness, rendering them as sweets; they are also stuffed with dulce de leche, resulting in a dessert called toronja rellena (stuffed grapefruit).[30] In Haiti, grapefruit is used primarily for its juice (jus de Chadèque), but also is used to make jam (confiture de Chadèque).[31][32]

Grapefruits are one of the most common hosts for fruit flies like A. suspensa, which will lay their eggs in overripe or spoiled grapefruits.[33] The larvae of these flies will then consume the fruit in order to gain nutrients until they can proceed into the pupae stage. This parasitism has led to millions in economic costs for nations in Central America and Southern North America.[34]

Grapefruit has also been investigated in cancer medicine pharmacodynamics. Its inhibiting effect on the metabolism of some drugs may allow smaller doses to be used, which can help to reduce costs.[35]

Lifestyle magazines and websites sometimes recommend grapefruit as a stain remover for porcelain and enamel.[36][37]

The grapefruit is a parent to many hybrids: