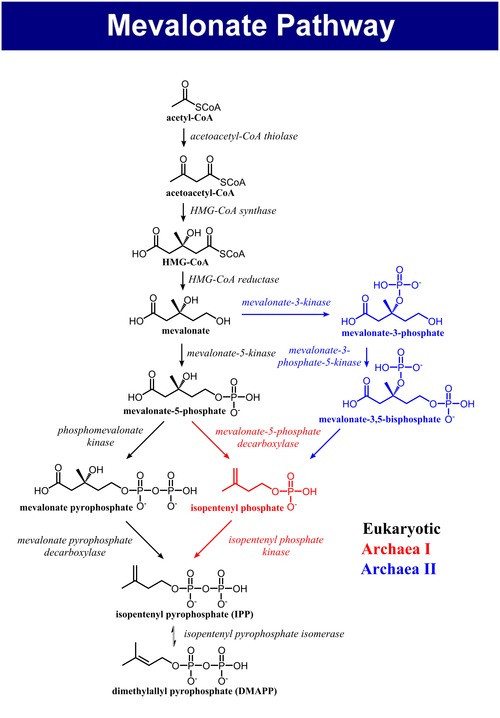 Mevalonate pathway diagram showing the conversion of acetyl-CoA into isopentenyl pyrophosphate, the essential building block of all isoprenoids. The eukaryotic variant is shown in black. Archaeal variants are shown in red and blue.

The mevalonate pathway, also known as the isoprenoid pathway or HMG-CoA reductase pathway is an essential metabolic pathway present in eukaryotes, archaea, and some bacteria.[1] The pathway produces two five-carbon building blocks called isopentenyl pyrophosphate (IPP) and dimethylallyl pyrophosphate (DMAPP), which are used to make isoprenoids, a diverse class of over 30,000 biomolecules such as cholesterol, vitamin K, coenzyme Q10, and all steroid hormones.[2]

The mevalonate pathway of eukaryotes, archaea, and eubacteria all begin the same way. The sole carbon feed stock of the pathway is acetyl-CoA. The first step condenses two acetyl-CoA molecules to yield acetoacetyl-CoA. This is followed by a second condensation to form HMG-CoA (3-hydroxy-3- methyl-glutaryl-CoA). Reduction of HMG-CoA yields (R)-mevalonate. These first 3 enzymatic steps are called the upper mevalonate pathway.[4]

Several key enzymes can be activated through DNA transcriptional regulation on activation of SREBP (sterol regulatory element-binding protein-1 and -2). This intracellular sensor detects low cholesterol levels and stimulates endogenous production by the HMG-CoA reductase pathway, as well as increasing lipoprotein uptake by up-regulating the LDL-receptor. Regulation of this pathway is also achieved by controlling the rate of translation of the mRNA, degradation of reductase and phosphorylation.[1]

A number of drugs target the mevalonate pathway:

A number of diseases affect the mevalonate pathway: