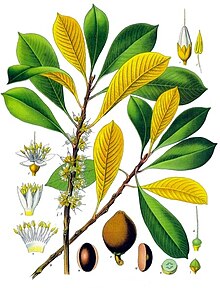 Gutta-percha is a tree of the genus Palaquium in the family Sapotaceae. The name also refers to the rigid, naturally biologically inert, resilient, electrically nonconductive, thermoplastic latex produced from the sap of the tree, particularly from Palaquium gutta; it is a polymer of isoprene which forms a rubber-like elastomer.

The word gutta-percha comes from the plant's name in Malay: getah translates as 'latex'. Percha or perca is an older name for Sumatra. 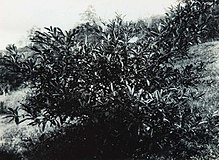 Palaquium gutta trees are 5–30 metres (20–100 ft) tall and up to 1 m (3 ft) in trunk diameter. The leaves are evergreen, alternate or spirally arranged, simple, entire, 8–25 cm (3–10 in) long, glossy green above, and often yellow or glaucous below. The flowers are produced in small clusters along the stems, each flower with a white corolla with four to seven (mostly six) acute lobes. The fruit is an ovoid 3–7 cm (1–3 in) berry, containing one to four seeds; in many species, the fruit is edible.

In Australia, gutta-percha is a common name specifically used for the euphorbiaceous tree Excoecaria parvifolia, which yields an aromatic, heavy, dark-brown timber.

Chemically, gutta-percha is a polyterpene, a polymer of isoprene, or polyisoprene, specifically (trans-1,4-polyisoprene). The cis structure of polyisoprene is the common latex elastomer. While latex rubbers are amorphous in molecular structure, gutta-percha (the trans structure) crystallizes, leading to a more rigid material.It exists in alpha and beta forms with the alpha form being brittle at room temperature. 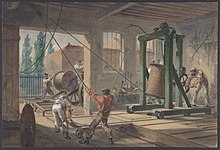 Cable manufacturing with gutta-percha at the Telegraph Construction and Maintenance Company in Greenwich, London, c. 1865

During the second half of the 19th century, gutta-percha was used for many domestic and industrial purposes,[3] and it became a household word. In particular, it was needed as insulation for underwater telegraph cables,[2] which, according to author John Tully, led to unsustainable harvesting and collapse of supply.[4]

According to Harvey Wickes Felter and John Uri Lloyd's Endodontology:

Even long before Gutta-percha was introduced into the Western world, it was used in a less processed form by the natives of the Malaysian archipelago for making knife handles, walking sticks and other purposes. The first European to discover this material was John Tradescant, who collected it in the far east in 1656. He named this material "Mazer wood". Dr. William Montgomerie, a medical officer in Indian service, introduced gutta-percha into practical use in the West. He was the first to appreciate the potential of this material in medicine, and he was awarded the gold medal by the Royal Society of Arts, London in 1843.[5]

Gutta-percha latex is biologically inert, resilient, and is a good electrical insulator with a high dielectric strength. The wood of many species is also valuable.[citation needed]

Western inventors discovered the properties of gutta-percha latex in 1842 through samples sent to England by William Montgomerie,[citation needed] although the people of its Malayan habitat had used it for many applications for centuries. (Faraday is quoted as having discovered its value as an insulator soon after the introduction of the material to Britain in 1843.[6]) Allowing this fluid to evaporate and coagulate in the sun produced a latex which could be made flexible again with hot water, but which did not become brittle, unlike rubber prior to the discovery of vulcanization.[citation needed]

By 1845, telegraph wires insulated with gutta-percha were being manufactured in the UK. It served as the insulating material for early undersea telegraph cables, including the first transatlantic telegraph cable.[7] The material was a major constituent of Chatterton's compound used as an insulating sealant for telegraph and other electrical cables.[citation needed]

Since about 1940, polyethylene has supplanted gutta-percha as an electrical insulator.[citation needed]

In the mid-19th century, gutta-percha was used to make furniture, notably by the Gutta Percha Company, established in 1847.[2] Several of these ornate, revival-style pieces were shown at the 1851 Great Exhibition in Hyde Park, London. The company also made a range of utensils.[citation needed]

The "guttie" golf ball (which had a solid gutta-percha core) revolutionized the game.[citation needed] Gutta-percha was used to make "mourning" jewelry, because it was dark in color and could be easily molded into beads or other shapes. Pistol hand grips and rifle shoulder pads were also made from gutta-percha, since it was hard and durable, though it fell into disuse when synthetic plastics such as Bakelite became available.

Gutta-percha was used in canes and walking sticks. In 1856, United States Representative Preston Brooks used a cane made of gutta-percha as a weapon in his attack on Senator Charles Sumner.[9]

The same bioinertness that made it suitable for marine cables also means it does not readily react within the human body. It is used in a variety of surgical devices and during root canal therapy. It is the predominant material used to obturate, or fill, the empty space inside the root of a tooth after it has undergone endodontic therapy. Its physical and chemical properties, including but not limited to its inertness and biocompatibility, melting point,[10] ductility, and malleability, make it important in endodontics,[5] e.g., as gutta-percha points. Zinc oxide is added to reduce brittleness and improve plasticity. Barium sulfate is added to provide radiopacity so that its presence and location can be verified in dental X-ray images.

Gutta-percha remained an industrial staple well into the 20th century, when it was gradually replaced with superior synthetic materials such as Bakelite, though a similar and cheaper natural material called balatá was often used in gutta-percha's place. The two materials are almost identical, and balatá is often called gutta-balatá.[citation needed]

Blocks of flotsam, about the size of a chopping-board, bearing the name "Tjipetir" (a plantation in the Dutch East Indies—now Indonesia—operating in the late 19th and early 20th centuries), were washed up on the beaches of northern Europe for some time through 2013 and 2014.[11] They are believed to be blocks of gutta-percha from the Japanese liner Miyazaki Maru, which was sunk 150 miles (240 km) west of the Isles of Scilly in 1917.