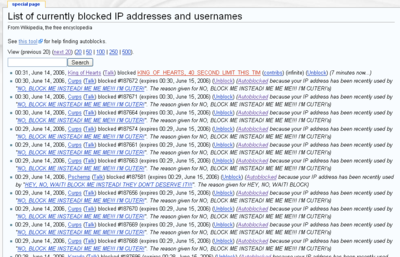 An example of an autoblock causing collateral damage. This display makes it look like admin Curps blocked many other users (identified by anonymizing six digit numbers). In actuality, Curps only blocked one user, and all the others were "collateral damage" caught by the autoblock because they were using IPs related to the blocked user.
Shortcuts

An autoblock is an automatic block of an IP address. Autoblocks are the result of an attempt to edit Wikipedia from an IP address recently used by a blocked user.

Each time a user edits Wikipedia, the IP address from which the edit was made is logged (this log is accessible only by a very small number of trusted users, called checkusers). If a blocked user attempts to edit, the IP from which they are editing is "autoblocked", to prevent their switching to editing anonymously or under a sockpuppet username.

It is possible for innocent users who have done nothing blockworthy to be blocked from editing by an autoblock. If this happens to you, simply request an unblock and an administrator will review the situation.

Users who find themselves autoblocked accidentally may request an unblock by one or more of the following methods:

If a user is autoblocked, an admin can clear the autoblock by:

Note that once the autoblock is cleared, the user's account name will no longer appear in the list.

If the user has posted the blocked IP on-wiki as part of the request to be unblocked, consider whether there is a need to remove this information for privacy/security reasons, using revision deletion.

When a user is autoblocked, they see the following message:

This account has been automatically blocked on Wikipedia.
This does not affect your ability to read Wikipedia pages.

This is because someone using this internet address or shared proxy server was blocked. The ability for all users on this IP address to edit pages has been automatically suspended to prevent abuse by the blocked party. Innocent users are sometimes caught in an autoblock.

Most people who see this message have done nothing wrong.

Some kinds of blocks restrict editing from specific service providers or telecom companies in response to recent abuse or vandalism, and affect other users who are unrelated to that abuse. See below if you do not believe you have done anything wrong.

The account $7 has been automatically blocked (disabled) by THE BLOCKING ADMIN for the following reason(s):

This block will expire on THE EXPIRATION DATE. The block ID is BLOCK ID.

Even when blocked, you will usually still be able to edit your user talk page and email administrators and other editors.

What does this mean?

As on many websites, Wikipedia administrators occasionally block accounts and IP ranges that are deemed responsible for or related to problematic activity. You may be an innocent victim of collateral damage, whereby a block of some other activity has accidentally caused your account to be unable to edit pages. If your editing access has been blocked by mistake, it will be reactivated very quickly, as soon as you let an administrator know of the problem. The box above gives the information you will need.

What is a block?

A block is a measure used to protect Wikipedia from possible improper use, or modification in breach of editorial policies. Once a block has expired, they become history unless problems reoccur. Blocks can be applied to a user account, an IP address, or a range of IP addresses. A number of automated features identify unblocked usage which apparently should be blocked; these are known as autoblocks and can be quickly rectified if incorrect.

Most common causes of an autoblock

The typical cause of an autoblock is because your IP address or network is either the same one used by another blocked account, or the software believes your account or IP address is connected to another blocked account. Due to the nature of some Internet service providers, automatic blocks may inadvertently affect people other than the person who the block was intended for.

If you are unjustly affected by this block, please copy the following text and paste it to the bottom of your user talk page:

Once you have followed the instructions above, an administrator will be alerted to your unblock request, and will respond shortly in order to review the block.

If this is a problem that affects you repeatedly, we encourage you to contact your Internet service provider or IT department, and ask them to contact Wikimedia's XFF project about enabling X-Forwarded-For HTTP headers on their proxy servers. This will reduce the chances of you being affected by future automatic blocks.

You will usually receive a faster response by posting the {{unblock-auto|2=<nowiki>REASON</nowiki>|3=THE BLOCKING ADMIN|4=BLOCK ID}} template onto your user talk page, as described in the instructions above. If you need help, however, you can submit a request to the Unblock Ticket Request System by clicking on "submit an unblock request" below. Make sure to include the block ID number shown in the box above.

Even though requests sent to the Unblock Ticket Request System are viewable only by administrators and trusted volunteers, under no circumstances should you send anyone your account's password, or reveal it to anyone else - even if you're asked to do so.

This system exists for the purpose of reviewing blocks only—any request to make edits to articles on your behalf will be disregarded. Correspondence containing legal threats, personal attacks or rudeness are likely to be ignored and may result in having your current block extended.

Other useful links: Blocking policy · Information on automatic blocks · Help:I have been blocked

Sometimes the term Autoblock disabled will show up in a block message. This means that when the user was blocked, that only their username was blocked, but other users on the same IP are still free to edit.

The default setting for a block is to have Autoblock enabled, but it generally does not say this explicitly in a block message. To disable the default autoblocking of an account, admins must manually uncheck the box that says "Autoblock any IP addresses used".

An example of autoblock in action:

When an autoblock occurs, users may be autoblocked as the result of a block on another user, who was probably using the same ISP. So a different user may end up blocked, even though they have personally done nothing wrong. This is referred to as "collateral damage". Example:

The only circumstances in which a user may be associated with an IP address, are certain policy violations detailed by the checkuser policy; even then, access to the Checkuser tool is granted only to a small group of trusted users, not administrators in general.

When a user is blocked with autoblocking enabled, a cookie will be set on the blocked user's browser for tracking purposes. This means that the user will still be blocked even after logging out and moving to a new IP address. When the cookie is set, and a user tries to edit a page, MediaWiki will load the original block specified in the cookie and prevent the user from making the edit. This does not, however, create a new autoblock for the new IP address. That only happens if the user logs into the original blocked account. This form of tracking is dependent on the user's browser retaining the cookie, and so will not work for all blocked users in all situations. The feature is intended to provide a small extra level of protection against blocks being circumvented.

When a block is issued, autoblocking is usually turned on by default, except for common dynamic IP ranges, such as those used by many residential ISPs. A list of such automatically exempt IP ranges can be found at MediaWiki:Autoblock whitelist.

Administrators can disable autoblocking at the time of blocking a user, by unchecking the checkbox. Once an "enabled" block is placed, it can also be fixed by modifying the user's block, but this should not be done unless absolutely necessary.

There is an internal autoblock expiry time variable, which is set to 24 hours, meaning that autoblocks only last for 24 hours. However, in the case of dynamic IP pools (such as those used by many residential ISPs), this may affect hundreds of users before the block expires. So in the case of an indefinite block, autoblocks may continue to be set by the software, weeks or months after the initial block has been set. Older indefinite blocks, dating from before the autoblock exemption whitelist and the option to disable when blocking, may also trigger autoblocks.

Since 2012 (Mediawiki v. 1.20.0), manually lifting the original account block automatically lifts every auto block that was created as a consequence of that block. (If the original block merely expires automatically, any dependent autoblocks are not immediately lifted.)

When IP addresses are autoblocked, they appear in Special:Ipblocklist (but not in the admin's block log) with a special mask that prevents the IP from being seen. Autoblocks register on Special:Ipblocklist and in the banner available to the blocked user, with the name of the admin that set the original block. However, the admin is not notified that an autoblock has been placed.