Cannabis indica is an annual plant in the family Cannabaceae.[1] It is a putative species of the genus Cannabis. Whether it and Cannabis sativa are truly separate species is a matter of debate. The Cannabis indica plant is cultivated for many purposes; for example, the plant fibers can be converted into cloth. Cannabis indica produces large amounts of tetrahydrocannabinol (THC).[2] The higher concentrations of THC provide euphoric effects making it popular for use both as a recreational and medicinal drug.

In 1785, Jean-Baptiste Lamarck published a description of a second species of Cannabis, which he named Cannabis indica. Lamarck based his description of the newly named species on plant specimens collected in India. Richard Evans Schultes described C. indica as relatively short, conical, and densely branched, whereas C. sativa was described as tall and laxly branched.[3] Loran C. Anderson described C. indica plants as having short, broad leaflets whereas those of C. sativa were characterized as relatively long and narrow.[4][5] Cannabis indica plants conforming to Schultes's and Anderson's descriptions originated from the Hindu Kush mountain range. Because of the often harsh and variable (extremely cold winters, and warm summers) climate of those parts, C. indica is well-suited for cultivation in temperate climates.[6] There was very little debate about the taxonomy of Cannabis until the 1970s, when botanists like Richard Evans Schultes began testifying in court on behalf of accused persons, who sought to avoid criminal charges of possession of Cannabis sativa by arguing that the plant material could instead be Cannabis indica.[7] 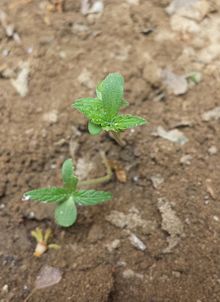 Broad-leafed Cannabis indica plants in the Indian Subcontinent are traditionally cultivated for the production of charas, a form of hashish. Pharmacologically, C. indica landraces tend to have higher THC content than C. sativa strains[8][9] Some users report more of a "stoned" feeling and less of a "high" from C. indica when compared to C. sativa. (The terms sativa and indica, used in this sense, are more appropriately termed "narrow-leaflet" drug type and "wide-leaflet" drug type Cannabis indica (or Cannabis sativa subsp. indica depending on the monotypic or polytipic point of view), respectively.[10]) The Cannabis indica high is often referred to as a "body buzz" and has beneficial properties such as pain relief in addition to being an effective treatment for insomnia and an anxiolytic, as opposed to sativa's more common reports of a cerebral, creative and energetic high, and even, albeit rarely, comprising hallucinations.[11] Differences in the terpenoid content of the essential oil may account for some of these differences in effect.[12][13] Common indica strains for recreational or medicinal use include Kush and Northern Lights.

A recent genetic analysis included both the narrow-leaflet and wide-leaflet drug "biotypes" under C. indica, as well as southern and eastern Asian hemp (fiber/seed) landraces and wild Himalayan populations.[14]

There are several key differences between Cannabis indica and Cannabis sativa. These include height and stature, internodal length, leaf size and structure, buds size and density, flowering time, odour, smoke and effects.[15] Indica plants tend to grow shorter and bushier than the sativa plants. Indica strains tend to have wide, short leaves with short wide blades, whereas sativa strains have long leaves with thin long blades. The buds of indica strains tend to be wide, dense and bulky, while sativa strains are likely to be long, sausage shaped flowers.[16]

On average, Cannabis indica has higher levels of THC compared to CBD, whereas Cannabis sativa has lower levels of THC to CBD.[9] However, huge variability exists within either species. A 2015 study shows the average THC content of the most popular herbal cannabis products in the Netherlands has decreased slightly since 2005.[17]

In the recent era of cannabis breeding higher-ratio CBD strains are being developed from Indica origins that may test out as 1:1 (CBD-THC balanced) or even as high as a 22:1 (CBD dominant). The medical interests in Cannabis are taking this further and we will see increasing cultivation trends for more strains developed with CBD-dominant ratios. In California, cities such as Coachella and Desert Hot Springs are re-zoning areas for cannabis cultivation. Even though Californians legalized recreational use of cannabis in late 2016, the LA Times, prior to the vote, reported an entrepreneurial focus on CBD-dominant medical hemp crops, "The demand for medical products was so high, this [380,000-square-foot (35,000 m2) cultivation expansion] was just to fill the need for that."[18] Low anxiety and hallucinogenic properties (psychoactive effects of THC reduced by CBD)[19] make these "high-CBD strains" very desirable for chronic treatment programs.

There are three chemotaxonomic types of Cannabis: one with high levels of THC, one which is more fibrous and has higher levels of CBD, and one that is an intermediate between the two.[9][20]

Cannabis strains with CBD:THC ratios above 5:2 are likely to be more relaxing and produce less anxiety than vice versa. This may be due to CBD's antagonistic effects at the cannabinoid receptors, compared to THC's partial agonist effect.[citation needed][dubious – discuss] CBD is also a 5-HT1A receptor (serotonin) agonist, which may also contribute to an anxiolytic-content effect.[21] The effects of sativa are well known for its cerebral high. Users can expect a more vivid and uplifting high, while indica is well known for its sedative effects which some prefer for night time use. Indica possesses a more calming, soothing, and numbing experience in which can be used to relax or relieve pain. Both types are used as medical cannabis.

During the 1970s, Cannabis indica strains from Afghanistan and Northern Pakistan particularly from the Hindu Kush mountain range were brought to the United States, where the first hybrids with Cannabis sativa plants from equatorial areas were developed, widely spreading marijuana cultivation throughout the States.[22]

Plants with elevated levels of propyl cannabinoids, including tetrahydrocannabivarin (THCV), have been found in populations of Cannabis indica from India, Nepal, Thailand, Afghanistan, and Pakistan, as well as southern and western Africa. THCV levels up to 53.7% of total cannabinoids have been reported[9][23]

The name indica originally referred to the geographical area in which the plant was grown, leading to widespread public taxonomic misconceptions.[24] While C. sativa and C. indica have clear phenotypic differences, taxonomically they are the same species.[25] Minor chemotaxonomic differences has drawn investigation of a two-species hypothesis.[9] However, the two proposed species share the same morphology, are not reproductively isolated, and have demonstrated overwhelming capacity to produce viable, fertile offspring when bred with one another, therefore they are both recognized as C. sativa.

In 2011, a team of Canadian researchers led by Andrew Sud announced that they had sequenced a draft genome of the Purple Kush variety of C. indica.[26]