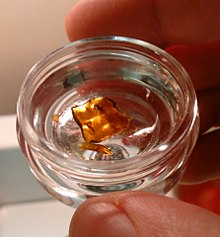 Extract in a lip-balm sized container

In Colorado, the Marijuana Enforcement Division (MED) regulates almost every facet of the cannabis seed-to-sale process. There are heavy regulations on the containers that hold the concentrate: containers must be child-resistant, opaque, and have a multitude of legal text warning the consumer of the risks of consumption. MED also regulates the creation or extraction of cannabis extract. [6]

The major difference between live resin and other cannabis concentrates lies in the way they are produced. The manufacturing of live resin involves fresh, live cannabis either freshly harvested or flash-frozen marijuana. This helps protect plant’s content matter, aroma and flavor.

This article incorporates public domain material from the Department of Justice Drug Enforcement Administration document: "What You Should Know About Marijuana Concentrates (Also Known as THC Extractions)".