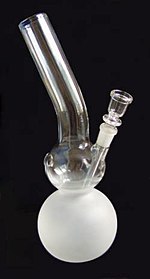 Bongs are an example of user-specific paraphernalia, in this case for the use of cannabis.

"Drug paraphernalia" is a term, to denote any equipment, product or accessory that is intended or modified for making, using, or concealing drugs, typically for recreational purposes. Drugs such as marijuana, cocaine, heroin, and methamphetamine are related to a wide range of paraphernalia. Paraphernalia generally falls into two categories: user-specific products and dealer-specific products.

User-specific products include glass hashish pipes, crack cocaine pipes, smoking masks, hashish bongs, cocaine freebase kits, syringes, roach clips for holding the burning end of a marijuana joint. Some stores sell items for growing hydroponic marijuana, such as guidebooks, fertilizer, and fluorescent grow-lights. The term "paraphernalia" also refers to items such as hollowed-out cosmetic cases or fake pagers when used to conceal illegal drugs, or products purported to cleanse an individual's system of drug residues to increase the individual's chance of passing a urine analysis for drug use.

Dealer-specific products are used by the drug sellers or traffickers for preparing drugs for distribution. Items such as digital scales, vials, and small zipper storage bags that can be used to sell crack, heroin, or marijuana fall into this category.

In the US, enterprising individuals would sell items openly in the street, until anti-paraphernalia laws in the 1980s eventually ended the practice. With the growth of the Internet, drug paraphernalia sellers have greatly expanded their sales to a worldwide market.

According to the Federal Drug Paraphernalia Statute, 21 USC 863, which is part of the Controlled Substances Act, in the US it is illegal to sell, transport through the mail, transport across state lines, import, or export drug paraphernalia as defined. Possession is usually illegal under State law. The law gives specific guidance on determining what constitutes drug paraphernalia. Many states have also enacted their own laws prohibiting drug paraphernalia. In the 1982 case Hoffman Estates v. The Flipside, Hoffman Estates, Inc., the US Supreme Court found a municipal ordinance requiring licensing for paraphernalia sales to have sufficiently distinguished marketing for illegal use to be constitutional. Government crackdowns have resulted in the arrest of sellers of recreational drug paraphernalia, such as actor Tommy Chong, who spent time in prison in 2003 for having his name used on bongs for sale via the internet.[1]

The American drug paraphernalia laws can also apply to many items that have more legitimate uses than for illegal drugs. Small mirrors and other glass products (such as Pyrex test tubes and "glass crack pipes"), lighters, rolled up currency, razor blades, aluminum/tin foil, credit cards, and spoons have all been used to prosecute people under paraphernalia laws, whether or not they contain residue of illegal drugs. While United States federal statute defines paraphernalia with the concept of primary use, in practice this can be interpreted to be what the individual was currently primarily using the item for, allowing for common items to be treated as paraphernalia only in cases where more clear evidence allows such determination of primary use.[citation needed]

Head shops are very much alive and well in the US, however. Generally, though, they have signs near presumable paraphernalia saying "For tobacco use only" or "Not for use with illicit drugs." Many also ban customers for referencing use of illegal drugs when buying items. Similar policies are used in online head shops, where customers are often made to verify detailed disclaimers of their non-use of illegal substances before buying items.[2]