AV-101 was discovered at Marion Merrell Dow and its biological activity was explored at University of Maryland. It underwent initial development at Artemis Neuroscience which was acquired by VistaGen in 2003. As of 2016 it was in a Phase II clinical trial for major depressive disorder. 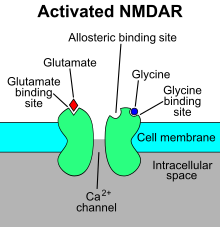 4-Chlorokynurenine penetrates the blood–brain barrier via the large neutral amino acid transporter 1.[2] In the central nervous system it is converted to 7-chlorokynurenic acid by kynurenine aminotransferase in astrocytes.[3]

Most of its therapeutic potential is believed to occur via 7-chlorokynurenic acid which inhibits the glycine co-agonist site of NMDA receptors.[3]

Another metabolite, 4-chloro-3-hydroxy-anthranilic acid, inhibits the enzyme 3-hydroxyanthranilate oxidase, which provides a rationale for further testing in neurodegenerative diseases.[3]

Artemis Neuroscience was formed to develop work done by University of Maryland professor Robert Schwartz in collaboration with scientists at Marion Merrell Dow (which became part of Sanofi by way of Aventis); this work included AV-101.[4][5][6]

VistaGen filed an Investigational New Drug application with the FDA for use of AV-101 in neuropathic pain in 2013.[3]

In 2013, other NMDA receptor antagonists in clinical trials for depression included lanicemine, esketamine, and rapastinel, with lanicemine being the most advanced.[8]

AV-101 showed efficacy in animal model of Huntington's disease[3] and showed rapid-acting antidepressant effects similar to ketamine in the forced-swim test and two other behavioral models of depression in rodents.[9]

As of 2016 a Phase II clinical trial was underway in major depressive disorder.[9]

It has been found to be effective for neuropathic pain in animal studies. [11]