Group of receptors to cannabinoid compounds 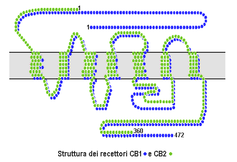 Cannabinoid receptors, located throughout the body, are part of the endocannabinoid system, which is involved in a variety of physiological processes including appetite, pain-sensation, mood, and memory.[1]

There are currently two known subtypes of cannabinoid receptors, termed CB1 and CB2.[6][7] The CB1 receptor is expressed mainly in the brain (central nervous system or "CNS"), but also in the lungs, liver and kidneys. The CB2 receptor is expressed mainly in the immune system and in hematopoietic cells,[8] however further research has found the existence of these receptors in parts of the brain as well.[9] Mounting evidence suggests that there are novel cannabinoid receptors[10] that is, non-CB1 and non-CB2, which are expressed in endothelial cells and in the CNS. In 2007, the binding of several cannabinoids to the G protein-coupled receptor GPR55 in the brain was described.[11]

The protein sequences of CB1 and CB2 receptors are about 44% similar.[12][13] When only the transmembrane regions of the receptors are considered, amino acid similarity between the two receptor subtypes is approximately 68%.[5] In addition, minor variations in each receptor have been identified. Cannabinoids bind reversibly and stereo-selectively to the cannabinoid receptors. Subtype selective cannabinoids have been developed which theoretically may have advantages for treatment of certain diseases such as obesity.[14]

A neurotransmitter for a possible endocannabinoid system in the brain and peripheral nervous system, anandamide (from 'ananda', Sanskrit for 'bliss'), was first characterized in 1992,[20][21][22] followed by discovery of other fatty acid neurotransmitters that behave as endogenous cannabinoids having a low-to-high range of efficacy for stimulating CB1 receptors in the brain and CB2 receptors in the periphery.[17][20]

Cannabinoid receptor type 1 (CB1) receptors are thought to be one of the most widely expressed Gαi protein-coupled receptors in the brain. One mechanism through which they function is endocannabinoid-mediated depolarization-induced suppression of inhibition, a very common form of retrograde signaling, in which the depolarization of a single neuron induces a reduction in GABA-mediated neurotransmission. Endocannabinoids released from the depolarized post-synaptic neuron bind to CB1 receptors in the pre-synaptic neuron and cause a reduction in GABA release due to limited presynaptic calcium ions entry.[medical citation needed]

They are also found in other parts of the body. For instance, in the liver, activation of the CB1 receptor is known to increase de novo lipogenesis.[23]

CB2 receptors are mainly expressed on T cells of the immune system, on macrophages and B cells, and in hematopoietic cells. They also have a function in keratinocytes. They are also expressed on peripheral nerve terminals. These receptors play a role in antinociception, or the relief of pain. In the brain, they are mainly expressed by microglial cells, where their role remains unclear. While the most likely cellular targets and executors of the CB2 receptor-mediated effects of endocannabinoids or synthetic agonists are the immune and immune-derived cells (e.g. leukocytes, various populations of T and B lymphocytes, monocytes/macrophages, dendritic cells, mast cells, microglia in the brain, Kupffer cells in the liver, astrocytes, etc.), the number of other potential cellular targets is expanding, now including endothelial and smooth muscle cells, fibroblasts of various origins, cardiomyocytes, and certain neuronal elements of the peripheral or central nervous systems.[8]

The existence of additional cannabinoid receptors has long been suspected, due to the actions of compounds such as abnormal cannabidiol that produce cannabinoid-like effects on blood pressure and inflammation, yet do not activate either CB1 or CB2.[24][25] Recent research strongly supports the hypothesis that the N-arachidonoyl glycine (NAGly) receptor GPR18 is the molecular identity of the abnormal cannabidiol receptor and additionally suggests that NAGly, the endogenous lipid metabolite of anandamide (also known as arachidonoylethanolamide or AEA), initiates directed microglial migration in the CNS through activation of GPR18.[26] Other molecular biology studies have suggested that the orphan receptor GPR55 should in fact be characterised as a cannabinoid receptor, on the basis of sequence homology at the binding site. Subsequent studies showed that GPR55 does indeed respond to cannabinoid ligands.[11][27] This profile as a distinct non-CB1/CB2 receptor that responds to a variety of both endogenous and exogenous cannabinoid ligands, has led some groups to suggest GPR55 should be categorized as the CB3 receptor, and this re-classification may follow in time.[28] However this is complicated by the fact that another possible cannabinoid receptor has been discovered in the hippocampus, although its gene has not yet been cloned,[29] suggesting that there may be at least two more cannabinoid receptors to be discovered, in addition to the two that are already known. GPR119 has been suggested as a fifth possible cannabinoid receptor,[30] while the PPAR family of nuclear hormone receptors can also respond to certain types of cannabinoid.[31]

Cannabinoid receptors are activated by cannabinoids, generated naturally inside the body (endocannabinoids) or introduced into the body as cannabis or a related synthetic compound.[12] Similar responses are produced when introduced in alternative methods, only in a more concentrated form than what is naturally occurring.

After the receptor is engaged, multiple intracellular signal transduction pathways are activated. At first, it was thought that cannabinoid receptors mainly inhibited the enzyme adenylate cyclase (and thereby the production of the second messenger molecule cyclic AMP), and positively influenced inwardly rectifying potassium channels (=Kir or IRK).[32] However, a much more complex picture has appeared in different cell types, implicating other potassium ion channels, calcium channels, protein kinase A and C, Raf-1, ERK, JNK, p38, c-fos, c-jun and many more.[32] For example, in human primary leukocytes CB2 displays a complex signalling profile, activating adenylate cyclase via stimulatory Gαs alongside the classical Gαi signalling, and induces ERK, p38 and pCREB pathways.[33]

Prenatal cannabis exposure (PCE) has been shown to perturb the fetal endogenous cannabinoid signaling system. This perturbation has not been shown to directly affect neurodevelopment nor cause lifelong cognitive, behavioral, or functional abnormalities, but it may predispose offspring to abnormalities in cognition and altered emotionality from post-natal factors.[34] Additionally, PCE may alter the wiring of brain circuitry in foetal development and cause significant molecular modifications to neurodevelopmental programs that may lead to neurophysiological disorders and behavioural abnormalities.[35]

Synthetic tetrahydrocannabinol (THC) is prescribed under the INN dronabinol or the brand name Marinol, to treat vomiting and for enhancement of appetite, mainly in people with AIDS as well as for refractory nausea and vomiting in people undergoing chemotherapy.[36] Use of synthetic THC is becoming more common as the known benefits become more prominent within the medical industry. THC is also an active ingredient in nabiximols, a specific extract of Cannabis that was approved as a botanical drug in the United Kingdom in 2010 as a mouth spray for people with multiple sclerosis to alleviate neuropathic pain, spasticity, overactive bladder, and other symptoms.[37]