Regulations and restrictions on the sale of cannabis sativa as a drug began as early as 1906 (see Legal history of cannabis in the United States). The head of the Federal Bureau of Narcotics (FBN), Harry J. Anslinger, argued that, in the 1930s, the FBN had noticed an increase of reports of people smoking marijuana.[2] He had also, in 1935, received support from president Franklin D. Roosevelt for adoption of the Uniform State Narcotic Act, state laws that included regulations of cannabis.[3]

The total production of hemp fiber in the United States had in 1933 decreased to around 500 tons per year. Cultivation of hemp began to increase in 1934 and 1935 but production remained at very low volume compared with other fibers.[4][5][6] 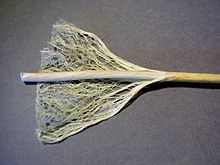 Hemp, bast with fibers. The stem, which can become hemp hurds, in the middle.

Some parties have argued that the aim of the Act was to reduce the size of the hemp industry[7][8][9] largely as an effort of businessmen Andrew Mellon, Randolph Hearst, and the Du Pont family.[7][9] The same parties have argued that with the invention of the decorticator, hemp had become a very cheap substitute for the paper pulp that was used in the newspaper industry.[7][10] These parties argue that Hearst felt that this was a threat to his extensive timber holdings. Mellon, Secretary of the Treasury and the wealthiest man in the US, had invested heavily in the Du Pont family's new synthetic fiber, nylon, a fiber that was competing with hemp.[7] In 1916, United States Department of Agriculture (USDA) chief scientists Jason L. Merrill and Lyster H. Dewey created a paper, USDA Bulletin No. 404 "Hemp Hurds as Paper-Making Material", in which they concluded that paper from the woody inner portion of the hemp stem broken into pieces, so called hemp hurds, was "favorable in comparison with those used with pulp wood".[11] Dewey and Merrill believed that hemp hurds were a suitable source for paper production. However, later research does not confirm this. The concentration of cellulose in hemp hurds is only between 32% and 38% (not 77%, a number often repeated by Jack Herer and others on the Internet).[12] Manufacture of paper with hemp as a raw material has shown that hemp lacks the qualities needed to become a major competitor to the traditional paper industry, which still uses wood or waste paper as raw material. In 2003, 95% of the hemp hurds in the EU were used for animal bedding, almost 5% were used as building material.[13] The DuPont Company and many industrial historians dispute a link between nylon and hemp. They argue that the purpose of developing the nylon was to produce a fiber that could compete with silk and rayon.[14][15][16]

The American Medical Association (AMA) opposed the act because the tax was imposed on physicians prescribing cannabis, retail pharmacists selling cannabis, and medical cannabis cultivation/manufacturing. The AMA proposed that cannabis instead be added to the Harrison Narcotics Tax Act.[17] The bill was passed over the last-minute objections of the American Medical Association. Dr. William Creighton Woodward, legislative counsel for the AMA, objected to the bill on the grounds that the bill had been prepared in secret without giving proper time to prepare their opposition to the bill.[18] He doubted their claims about marijuana addiction, violence, and overdosage; he further asserted that because the word Marijuana was largely unknown at the time, the medical profession did not realize they were losing cannabis. "Marijuana is not the correct term ... Yet the burden of this bill is placed heavily on the doctors and pharmacists of this country."[18]

The bill was passed on the grounds of different reports[19] and hearings.[20] Anslinger also referred to the International Opium Convention that from 1928 included cannabis as a drug not a medicine, and that all states had some kind of laws against improper use of cannabis (for ex. the Uniform State Narcotic Act). By 1951, however, new justifications had emerged, and the Boggs Act that superseded the Marihuana Tax Act of 1937 was passed.[citation needed] In August 1954, the Internal Revenue Code of 1954 was enacted, and the Marihuana Tax Act was included in Subchapter A of Chapter 39 of the 1954 Code.

Operation of the act[edit]

Shortly after the 1937 Marihuana Tax Act went into effect on October 1, 1937, the Federal Bureau of Narcotics and Denver City police arrested Moses Baca for possession and Samuel Caldwell for dealing. Baca and Caldwell's arrest made them the first marijuana convictions under U.S. federal law for not paying the marijuana tax. Judge Foster Symes sentenced Baca to 18 months and Caldwell to four years in Leavenworth Penitentiary for violating the 1937 Marihuana Tax Act.

After the Philippines fell to Japanese forces in 1942, the Department of Agriculture and the US Army urged farmers to grow fiber hemp. Tax stamps for cultivation of fiber hemp began to be issued to farmers. Without any change in the Marihuana Tax Act, 400,000 acres (1,600 km2) were cultivated with hemp between 1942 and 1945. The last commercial hemp fields were planted in Wisconsin in 1957.[21]

In 1967, President Johnson's Commission on Law Enforcement and Administration of Justice opined, "The Act raises an insignificant amount of revenue and exposes an insignificant number of marijuana transactions to public view, since only a handful of people are registered under the Act. It has become, in effect, solely a criminal law, imposing sanctions upon persons who sell, acquire, or possess marijuana."[22]

In 1969 in Leary v. United States, part of the Act was ruled to be unconstitutional as a violation of the Fifth Amendment, since a person seeking the tax stamp would have to incriminate him/herself.[23][24] In response the Congress passed the Controlled Substances Act as Title II of the Comprehensive Drug Abuse Prevention and Control Act of 1970,[25] which repealed the 1937 Act.

Although the spelling "marijuana" is more common in current usage, the actual spelling used in the Marihuana Tax Act is "marihuana". "Marihuana" was the spelling most commonly used in Federal Government documents at the time.

In addition, the Marihuana Tax Act of 1937 legitimized the use of the term "marijuana" as a label for hemp and cannabis plants and products in the US and around the world. Prior to 1937, "marijuana" was slang; it was not included in any official dictionaries.[26] The word marijuana is probably of Mexican origin. Mexico itself had passed prohibition for export to the US in 1925, following the International Opium Convention.[27] In the years leading up to the tax act, it was in common use in the United States, "smoked like tobacco", and called "ganjah", or "ganja".[28][29] After the enactment, illegal immigrants and US citizens could be arrested for possession of cannabis.