For Alternative Approaches to Addiction, Think & do tank (FAAAT), often shortened to FAAAT think & do tank, is an international non-profit organization created in 2015 and registered in France,[2] with office in Paris (France). In May 2019 the organization started the process towards the discontinuation of its activities on 31 December 2019.

The aim of FAAAT to impulse and support research and ground-up policy alternatives in the field of addiction, drug use and substance abuse, and to enhance civil society interaction with policymakers at international level, through social engineering and collective action. According to their website, FAAAT supports "Transparent and measurable drug policies framed by fundamental rights, grounded on sustainable development, enforcing empowerment, social justice and health" and "supports the development of a legally controlled market for cannabis."[3] FAAAT works both at the local level in several European countries, and develops actions close to the international institutions relevant on drug policy issues.[4][5]

FAAAT's vision is that, from the local up to the international level, public policies related to controlled drugs should be transparent and measurable, framed by the Fundamental human rights of citizens, grounded on sustainable development, and that can empower the whole society while enforcing social justice and protecting health. The think-tank part of FAAAT researches rigorous and ethical policy alternatives to the ones nowadays enforced, and take action through social engineering, collective action and advocacy for ground-up democratic reformers at all level.

The project FAAAT was started in August 2015, and legally registered in February 2016 by drug policy reform advocates that had been previously operating together at international level, in particular at the frequent meetings of the United Nations Commission on Narcotic Drugs. Most come from the French chapter of NORML, and the European Coalition for Just and Effective Drug Policies,[6] but also from the US Veterans for Medical Cannabis Access.

The organisation collaborates with a large network of experts, contributors,[7] professionals and public figures. FAAAT holds annual conferences at the regular sessions of the Commission on Narcotic Drugs, organizes exhibits,[8] apart from being regularly present to lobby or deliver statements.[9]

The organization claims two goals are structuring its actions (the so-called do-tank), "take action to ground the updates of international drug policy on sustainable development, human rights, transparency, and inclusiveness" and "strengthen peer groups, social movements and the nonprofit sector to increase knowledge, sustainability, effectiveness, and capacity for collective action on drug-related issues." 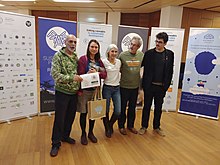 Leadership of FAAAT think and do tank during the closure of the International Cannabis Policy Conference 2018. From left to right: Farid Ghehiouèche, Hanka Gabrielová, Amy Case King, Michael Krawitz and Kenzi Riboulet-Zemouli.

As such, FAAAT has been essentially active at the multilateral and international level (including at the European Union level[10]). FAAAT has also supported local advocacy groups (such as the Catalan Network of People who Use Drugs CATNPUD,[11] the rural cannabis farmers of the Ghomara and Senhaja people of the Moroccan central Riff[12] or the French platform of NGOs for the reform of drug policies[13]).

FAAAT also works to foster exchange of data and know-hows between politics, scholars and civil society stakeholders[14] on drug-related policies and field practices.[15]

The organization works closely with the official consultative bodies towards the United Nations: NYNGOC (New-York NGO Committee on Drugs) and VNGOC (Vienna NGO Committee on Drugs). FAAAT is also a founding member of the IMCPC (International Medical Cannabis Patients Coalition) and the Geneva Platform on Human Rights, Health and Psychoactive Substances.

Logo of the series of events organized in the United Nations Office at Vienna.

Although mainly focusing on international cannabis policy, the research department of FAAAT (so-called think-tank) claims to "impulse a modern approach to the categorification of "drugs": renew terminology, taxonomy & scheduling to review the biochemical paradigm of drug use" and pretends to "shift drug policies towards evidence and effectiveness: enhancing positive drug-related programs and actions from the ground."[29]

As such, five main axis of research appear:

FAAAT is registered as an editor at the French national registry, and showcases its publications on its website.[46] Remarked publications are: