Skip to content
Pure or hybrid varieties of cannabis

Pure sativas are relatively tall (reaching as high as 4.5 meters), with long internodes and branches, and large, narrow-bladed leaves. Pure indica varieties are shorter and bushier, with wider leaflets. They are often favored by indoor growers for their size. Sativas bloom later than indicas, often taking a month or two longer to mature. The subjective effects of sativas and indicas are said to differ, but the ratio of tetrahydrocannabinol (THC) to cannabidiol (CBD) in most named drug varieties of both types is similar (averaging about 200:1). Unlike most commercially developed strains, indica landraces exhibit plants with varying THC/CBD ratios.[4] Avidekel, a medical marijuana strain developed in Israel, has a very low content of THC but a high content of CBD, limiting its psychoactive potential while exploring the beneficial medical effects of the latter.[5]

The informal designation sativa and indica may have various, controversial meanings. Morphologically, the name sativa designates tall plants with narrow leaves, while indica refers to short plants with wide leaves. Among the marijuana community however, sativa rather refers to equatorial varieties producing stimulating psychoactive effects (THC:CBD [almost equal to] 1), whereas indica-type plants from Central Asia are used for relaxing and sedative drugs (THC:CBD > 1).[7] 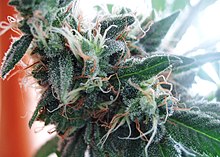 In addition to pure indica, sativa, and ruderalis varieties, hybrid varieties with varying ratios of these three types are common, such as the White Widow hybrid which has about 60% indica and 40% sativa ancestry. These hybrid varieties exhibit traits from both parental types. There are also commercial crossbred hybrids which contain a mix of both ruderalis, indica or sativa genes, and are usually autoflowering varieties. These varieties are bred mostly for the medicinal cannabis market, since they are not very appreciated by recreational cannabis users because ruderalis varieties are lower in THC and impart a slightly unpleasant taste. "Lowryder" was an early auto-flowering hybrid that retained the flowering behavior of ruderalis plants, while also producing appreciable amounts of THC and CBD. Autoflowering cannabis varieties have the advantage of being discreet due to their small stature. They also require shorter growing periods, as well as having the additional advantage that they do not rely on a change in the photoperiod to determine when to flower. 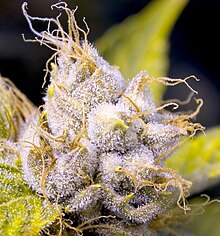 Techniques such as mutation breeding are used to develop new strains using irradiation or chemical mutagens such as colchicine.[16] Various companies have been experimenting with creating new strains using genetic engineering techniques.[17][18][19]

THC is associated with the psychoactive high, while CBD is not psychoactive and is purported to have medicinal properties.[20][21][22]

There is little evidence about the safety or efficacy of cannabinoids in the treatment of epilepsy.[23][24]

In a retail market that is decriminalized such as in The Netherlands, where wholesale production is illegal but prosecutions are not always enforced because of the contradiction of the law that is recognised by the courts,[25] competition puts pressure on breeders to create increasingly attractive varieties to maintain market share. Breeders give their strains distinct and memorable names in order to help differentiate them from their competitors' strains, although they may in fact be very similar.

Popular strains are incorporated into new hybrids, which often bear a similar name to their parent. This phenomenon has occurred with Haze and Sour varieties, among others.[citation needed]

Acapulco Gold is a golden-leafed Cannabis sativa strain originally from the Acapulco area of southwest Mexico.[26][27][28]

Bedrocan is a medicinal cannabis variety cultivated from a Dutch medical marijuana Cannabis sativa L. strain, having a standardized content of THC (22%) and CBD (1%). It is currently cultivated by Bedrocan Nederland, Bedrocan Canada and Bedrocan Česká Republika. It was first introduced in 2003 and is dispensed through pharmacies after prescription from a physician.[29] 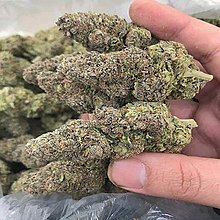 Blue Dream is a hybrid cannabis strain widely used for both medical and recreational purposes first developed in 2003.[30]

Charlotte's Web is a high-cannabidiol (CBD), low-tetrahydrocannabinol (THC) cannabis variety and extract marketed as a dietary supplement under federal law of the United States.[31][32][33] It is produced by the Stanley brothers in Colorado. It does not induce the psychoactive "high" typically associated with recreational marijuana strains that are high in THC.[34] In September 2014, the Stanleys announced that they would ensure that the product consistently contained less than 0.3% THC.[35] Charlotte's Web gained national attention when it was used to treat Charlotte Figi's epileptic seizures.[36][37] Her story has led to her being described as "the girl who is changing medical marijuana laws across America,"[38] as well as the "most famous example of medicinal hemp use".[39]

Skunk refers to cannabis strains that are strong-smelling and have been likened to the smell of the spray from a skunk. These strains of cannabis are believed to have originated during the early 1990s in the United States prior to larger-scale development and popularization by Dutch growers.[40] Just as with other strains of cannabis, skunk is commonly grown in controlled indoor environments under specialized grow lights, or in a greenhouse when full outdoor conditions are not suitable; skunk strains are hybrids of Cannabis sativa and Cannabis indica.[40]