Toluene toxicity refers to the harmful effects caused by toluene on the body. 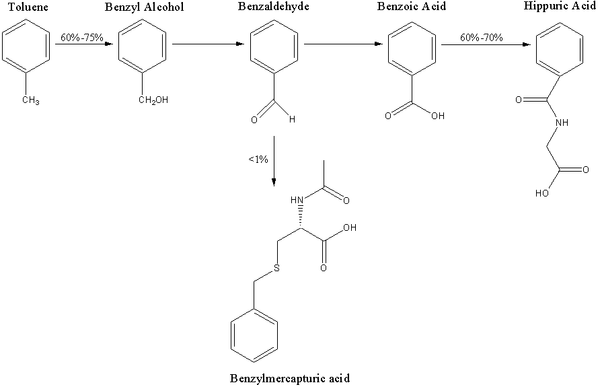 Ring hydroxylation to cresols is a minor pathway in the metabolism of toluene. The majority of the cresol is excreted unchanged in urine; however, some of the p-cresol and o-cresol is excreted as a conjugate. Studies in rats have shown that p-cresol is primarily conjugated with glucuronide to produce p-cresylglucuronide, though this may not be applicable to humans.[8] o-cresol appears to be excreted mostly unchanged in urine or as the glucuronide or sulfate conjugate.[9] There appears to be some dispute over whether m-cresol is produced as a metabolite of toluene or not.[4][10]

When exposure to toluene occurs there is usually simultaneous exposure to several other chemicals.[4] Often toluene exposure occurs in conjunction with benzene and since they are to some degree metabolised by the same enzymes, the relative concentrations will determine their rate of elimination.[4] Of course the longer it takes for toluene to be eliminated the more harm it is likely to do.

The smoking and drinking habits of those exposed to toluene will partially determine the elimination of toluene. Studies have shown that even a modest amount of acute ethanol consumption can significantly decrease the distribution or elimination of toluene from the blood resulting in increased tissue exposure.[11] Other studies have shown that chronic ethanol consumption can enhance toluene metabolism via the induction of CYP2E1.[12] Smoking has been shown to enhance the elimination rate of toluene from the body, perhaps as a result of enzyme induction.[13]

The diet can also influence toluene elimination. Both a low-carbohydrate diet and fasting have been shown to induce CYP2E1 and as a result increase toluene metabolism.[12] A low protein diet may decrease total CYP content and thereby reduce the elimination rate of the drug.[12]

Benzylmercapturic acid, a minor metabolite of toluene, is produced from benzaldehyde.[19] In more recent years, studies have suggested the use of urinary benzylmercapturic acid as the best marker for toluene exposure, because: it is not detected in non-exposed subjects; it is more sensitive than hippuric acid at low concentrations; it is not affected by eating or drinking; it can detect toluene exposure down to approximately 15 ppm; and it shows a better quantitative relationship with toluene than hippuric acid or o-cresol.[20][21]

The neurotoxic effects of long-term use (in particular repeated withdrawals) of toluene may cause postural tremors by downregulating GABA receptors within the cerebellar cortex.[23] Treatment with GABA agonists such as benzodiazepines provide some relief from toluene-induced tremor and ataxia.[23] An alternative to drug treatment is ventral intermediate nucleus (vim) thalamotomy.[23] The tremors associated with toluene misuse do not seem to be a transient symptom, but an irreversible and progressive symptom which continues after solvent abuse has been discontinued.[23]

There is some evidence that low-level toluene exposure may cause disruption in the differentiation of astrocyte precursor cells.[27] This does not appear to be a major hazard to adults; however, exposure of pregnant women to toluene during critical stages of fetal development could cause serious disruption to neuronal development.[27]