Agriculture is the practice of cultivating plants and livestock. Agriculture was the key development in the rise of sedentary human civilization, whereby farming of domesticated species created food surpluses that enabled people to live in cities. The history of agriculture began thousands of years ago. After gathering wild grains beginning at least 105,000 years ago, nascent farmers began to plant them around 11,500 years ago. Pigs, sheep, and cattle were domesticated over 10,000 years ago. Plants were independently cultivated in at least 11 regions of the world. Industrial agriculture based on large-scale monoculture in the twentieth century came to dominate agricultural output, though about 2 billion people still depended on subsistence agriculture.

Modern agronomy, plant breeding, agrochemicals such as pesticides and fertilizers, and technological developments have sharply increased crop yields, while causing widespread ecological and environmental damage. Selective breeding and modern practices in animal husbandry have similarly increased the output of meat, but have raised concerns about animal welfare and environmental damage. Environmental issues include contributions to global warming, depletion of aquifers, deforestation, antibiotic resistance, and growth hormones in industrial meat production. Agriculture is both a cause of and sensitive to environmental degradation, such as biodiversity loss, desertification, soil degradation and global warming, all of which can cause decreases in crop yield. Genetically modified organisms are widely used, although some are banned in certain countries.

The major agricultural products can be broadly grouped into foods, fibers, fuels and raw materials (such as rubber). Food classes include cereals (grains), vegetables, fruits, oils, meat, milk, fungi and eggs. Over one-third of the world's workers are employed in agriculture, second only to the service sector, although in recent decades, the global trend of a decreasing number of agricultural workers continues, especially in developing countries where smallholding is being overtaken by industrial agriculture and mechanization. (Full article...)

More about Agriculture...
Refresh with new selections below (purge)

A photo from a 1921 encyclopedia shows a tractor ploughing an alfalfa field
Agriculture is a major industry in the United States of America and the country is a net exporter of food. As of the last census of agriculture in 2007, there were 2.2 million farms, covering an area of 922 million acres (3,730,000 km2), an average of 418 acres (1.69 km2) per farm. Agriculture in the United States is primarily governed by periodically renewed U.S. farm bills. Governance is both a federal and a local responsibility with the United States Department of Agriculture being the federal department responsible. Government aid includes research into crop types and regional suitability as well as many kinds of subsidies, some price supports and loan programs. American farmers are not subject to production quotas and some laws are different for farms compared to other workplaces. A large part of the American farm workforce is made up of migrant and seasonal workers, many of them recent immigrants from Latin America or aliens working under work permits. Additional laws apply to these workers and their housing which is often provided by the farmer.

Corn, turkeys, tomatoes, potatoes, peanuts, and sunflower seeds constitute some of the major holdovers from the agricultural endowment of the Americas. European agricultural practices greatly affected the New England landscape, leaving behind many physical foot prints. Colonists brought livestock over from Europe which caused many changes to the land. Grazing animals required a lot of land and food to sustain them and due to grazing, native grasses were destroyed and European species began to replace them. New species of weeds were introduced and began to thrive as they were capable of withstanding the grazing of animals, whereas native species could not. In 2004, of the 145 million employed workers in the US, 834,000 of them held jobs as agricultural workers. 83% of these jobs were as farm workers. The median hourly income as of May 2004[update] was $7.70 for farmworkers planting, growing and harvesting crops, and $8.31 for farmworkers tending to animals. (Full article...) 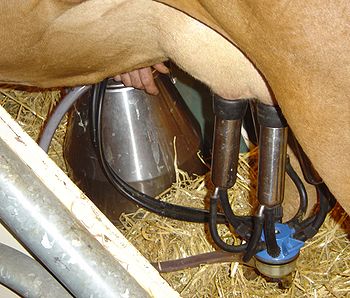 Automatic milking
Credit: David.Monniaux
A cow milking machine in action. This photo was taken on March 7, 2003
at the Salon de l'agriculture (Salon of agriculture) in Paris, France.

The following are images from various agriculture-related articles on Wikipedia.

Things you can do

– When a task is completed, please remove it from the list.