Diagram showing the proportion of a receptor bound to a ligand
This article is about the Hill equation as an equation used in biochemical characterization. For other uses, see Hill differential equation. 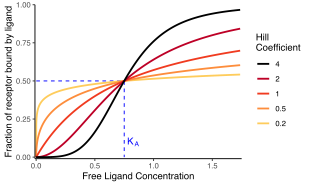 Binding curves showing the characteristically sigmoidal curves generated by using the Hill–Langmuir equation to model cooperative binding. Each curve corresponds to a different Hill coefficient, labeled to the curve's right. The vertical axis displays the proportion of the total number of receptors that have been bound by a ligand. The horizontal axis is the concentration of the ligand. As the Hill coefficient is increased, the saturation curve becomes steeper.

In biochemistry and pharmacology, the Hill equation refers to two closely related equations that reflect the binding of ligands to macromolecules, as a function of the ligand concentration. A ligand is "a substance that forms a complex with a biomolecule to serve a biological purpose" (ligand definition), and a macromolecule is a very large molecule, such as a protein, with a complex structure of components (macromolecule definition). Protein-ligand binding is an example of this kind of binding, which typically changes the structure of the target protein, thereby changing its function in a cell.

The distinction between the two Hill equations is whether they measure occupancy or response. The Hill–Langmuir equation reflects the occupancy of macromolecules: the fraction that is saturated or bound by the ligand.[1][2][nb 1] This equation is formally equivalent to the Langmuir isotherm.[3] Conversely, the Hill equation proper reflects the cellular or tissue response to the ligand: the physiological output of the system, such as muscle contraction.

The Hill–Langmuir equation was originally formulated by Archibald Hill in 1910 to describe the sigmoidal O2 binding curve of haemoglobin.[4]

The binding of a ligand to a macromolecule is often enhanced if there are already other ligands present on the same macromolecule (this is known as cooperative binding). The Hill–Langmuir equation is useful for determining the degree of cooperativity of the ligand(s) binding to the enzyme or receptor. The Hill coefficient provides a way to quantify the degree of interaction between ligand binding sites.[5]

The Hill equation (for response) is important in the construction of dose-response curves.

Plot of the % saturation of oxygen binding to haemoglobin, as a function of the amount of oxygen present (expressed as an oxygen pressure). Data (red circles) and Hill equation fit (black curve) from original 1910 paper of Hill[6].

The Hill–Langmuir equation is a special case of a rectangular hyperbola and is commonly expressed in the following ways.[2][7][8]

is often written as

is the ligand, equivalent to L, and

can be expressed in terms of the total amount of receptor and ligand-bound receptor concentrations:

).[8] Kd is the equilibrium constant for dissociation.

is defined so that

, this is also known as the microscopic dissociation constant and is the ligand concentration occupying half of the binding sites. In recent literature, this constant is sometimes referred to as 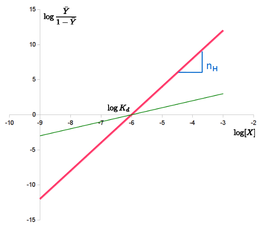 A Hill plot, where the x-axis is the logarithm of the ligand concentration and the y-axis is the transformed receptor occupancy. X represents L and Y represents theta.

The Hill plot is the rearrangement of the Hill–Langmuir Equation into a straight line.

Taking the reciprocal of both sides of the Hill–Langmuir equation, rearranging, and inverting again yields:

. Taking the logarithm of both sides of the equation leads to an alternative formulation of the Hill-Langmuir equation:

yields a linear plot, which is called a Hill plot.[7][8] Because the slope of a Hill plot is equal to the Hill coefficient for the biochemical interaction, the slope is denoted by

Transformations of equations into linear forms such as this were very useful before the widespread use of computers, as they allowed researchers to determine parameters by fitting lines to data. However, these transformations affect error propagation, and this may result in undue weight to error in data points near 0 or 1.[nb 2] This impacts the parameters of linear regression lines fitted to the data. Furthermore, the use of computers enables more robust analysis involving nonlinear regression.

A trio of dose response curves

A distinction should be made between quantification of drugs binding to receptors and drugs producing responses. There may not necessarily be a linear relationship between the two values. In contrast to this article's previous definition of the Hill-Langmuir equation, the IUPHAR defines the Hill equation in terms of the tissue response

is the drug concentration and

is the drug concentration that produces a 50% maximal response. Dissociation constants (in the previous section) relate to ligand binding, while

This form of the equation can reflect tissue/cell/population responses to drugs and can be used to generate dose response curves. The relationship between

and EC50 may be quite complex as a biological response will be the sum of myriad factors; a drug will have a different biological effect if more receptors are present, regardless of its affinity.

Statistical analysis of response as a function of stimulus may be performed by regression methods such as the probit model or logit model, or other methods such as the Spearman–Karber method.[9] Empirical models based on nonlinear regression are usually preferred over the use of some transformation of the data that linearizes the dose-response relationship.[10]

The Hill coefficient is a measure of ultrasensitivity (i.e. how steep is the response curve).

, may describe cooperativity (or possibly other biochemical properties, depending on the context in which the Hill–Langmuir equation is being used). When appropriate,[clarification needed] the value of the Hill coefficient describes the cooperativity of ligand binding in the following way:

The Hill coefficient can be calculated in terms of potency as:

are the input values needed to produce the 10% and 90% of the maximal response, respectively.[13]

The Hill-Langmuir equation is derived similarly to the Michaelis Menten equation but incorporates the Hill coefficient. Consider a protein (

), such as haemoglobin or a protein receptor, with

). The binding of the ligands to the protein can be represented by the chemical equilibrium expression:

(forward rate, or the rate of association of the protein-ligand complex) and

(reverse rate, or the complex's rate of dissociation) are the reaction rate constants for the association of the ligands to the protein and their dissociation from the protein, respectively.[8] From the law of mass action, which in turn may be derived from the principles of collision theory, the apparent dissociation constant

, an equilibrium constant, is given by:

At the same time,

By using the expression obtained earlier for the dissociation constant, we can replace

to yield a simplified expression for

. Consequently, the Hill–Langmuir Equation is also commonly written as an expression for the concentration

All of these formulations assume that the protein has

sites to which ligands can bind. In practice, however, the Hill Coefficient

The Hill and Hill–Langmuir equations are used extensively in pharmacology to quantify the functional parameters of a drug[citation needed] and are also used in other areas of biochemistry.

The Hill equation can be used to describe dose-response relationships, for example ion channel open-probability (P-open) vs. ligand concentration.[15]

where k is the maximal transcription rate of gene X.

where k is the maximal transcription rate of gene Y.

Because of its assumption that ligand molecules bind to a receptor simultaneously, the Hill–Langmuir equation has been criticized as a physically unrealistic model.[5] Moreover, the Hill coefficient should not be considered a reliable approximation of the number of cooperative ligand binding sites on a receptor[5][17] except when the binding of the first and subsequent ligands results in extreme positive cooperativity.[5]

Unlike more complex models, the relatively simple Hill–Langmuir equation provides little insight into underlying physiological mechanisms of protein-ligand interactions. This simplicity, however, is what makes the Hill–Langmuir equation a useful empirical model, since its use requires little a priori knowledge about the properties of either the protein or ligand being studied.[2] Nevertheless, other, more complex models of cooperative binding have been proposed.[7] For more information and examples of such models, see Cooperative binding.

Global sensitivity measure such as Hill coefficient do not characterise the local behaviours of the s-shaped curves. Instead, these features are well captured by the response coefficient measure.[18]

There is a link between Hill Coefficient and Response coefficient, as follows. Altszyler et al. (2017) have shown that these ultrasensitivity measures can be linked.[12]