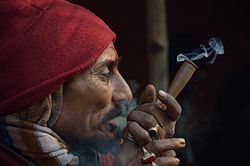 Cannabis smoking (or colloquially smoking pot) is the inhalation of smoke or vapors released by heating the flowers, leaves, or extracts of cannabis and releasing the main psychoactive chemical, Δ9-tetrahydrocannabinol (THC), which is absorbed into the bloodstream via the lungs. Archaeological evidence indicates cannabis with high levels of THC was being smoked at least 2,500 years ago.[1]

A blunt is cannabis rolled with a cigar wrapper (usually tobacco leaf, which contains nicotine).[8] Blunts are often made with blunt wraps: tobacco-based wraps — often flavored — that are related to the wraps used on a blunt cigar and are often used to roll cannabis [9]

A bong is similar to a pipe, only it has a water-chamber through which cannabis smoke passes prior to inhalation. Users fill the bong with water, sometimes also adding ice in order to cool the smoke. This cooling effect reduces the discomfort caused by the heat of the smoke. The bowl and stem assembly of most bongs is removed briefly after the cannabis is burned, allowing clean air to circulate and clear the smoke chamber, ensuring no smoke dissipates without being properly consumed. However, some users prefer to instead inhale with sufficient force to pull the burnt ash of the cannabis through the bowl's air hole, down the stem and into the water. This is done to eliminate the needs to remove the bowl and stem assembly and clean the bowl for further use. For example, this method is used in Australia. 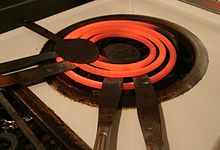 Spotting refers to a method of smoking cannabis.[14] In this method, small pieces of cannabis are rolled (or simply torn from a larger bud) to form the "spot". Generally, the tips of two knife blades are heated, the spot is compressed between the two blades, and the subsequent smoke is inhaled through the nose or mouth. This method of smoking is also referred to as "hot knives" because of the heated blades. Another means is specially made glass presses heated with a propane or butane torch.[15] In order to facilitate this process, a "spottle" (also referred to as a "bowser", "hooter" or "toker") is often, but not always, used to funnel the smoke and maximize the amount inhaled. A spottle is generally made from a funnel or cone-shaped container, such as the top (or neck) of a plastic or glass bottle or a gallon of milk/water.[16][full citation needed][17]

This method involves multiple persons smoking cannabis in an enclosed space, such as a car, with no way for smoke to escape. In addition to the primary smoke from the chosen smoking device(s), secondhand smoke is repeatedly inhaled and exhaled.[18] A single user breathing in and out of a breathbonnet (breadbag) can achieve this effect.