In biology, setae /ˈsiːtiː/ (singular seta /ˈsiːtə/; from the Latin word for "bristle") are any of a number of different bristle- or hair-like structures on living organisms. 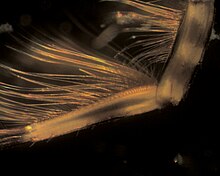 Setae on the foreleg of a mayfly

Annelid setae are stiff bristles present on the body. They help, for example, earthworms to attach to the surface and prevent backsliding during peristaltic motion. These hairs make it difficult to pull a worm straight from the ground. Setae in oligochaetes (a group including earthworms) are largely composed of chitin.[1] They are classified according to the limb to which they are attached; for instance, notosetae are attached to notopodia; neurosetae to neuropodia.[2]

Crustaceans have mechano- and chemosensory setae.[3] Setae are especially present on the mouthparts of crustaceans[3] and can also be found on grooming limbs.[4] In some cases, setae are modified into scale like structures.[4] Setae on the legs of krill and other small crustaceans help them to gather phytoplankton. It captures them and allows them to be eaten.

Setae on the integument of insects are unicellular, meaning that each is formed from a single epidermal cell of a type called a trichogen, literally meaning "bristle generator". They are at first hollow and in most forms remain hollow after they have hardened. They grow through and project through a secondary or accessory cell of a type called a tormogen, which generates the special flexible membrane that connects the base of the seta to the surrounding integument. Depending partly on their form and function, setae may be called hairs, macrotrichia, chaetae, or scales. The setal membrane is not cuticularized and movement is possible. Some insects, such as Eriogaster lanestris larvae, use setae as a defense mechanism, as they can cause dermatitis when they come into contact with skin.[5] 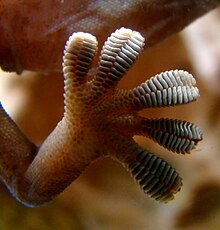 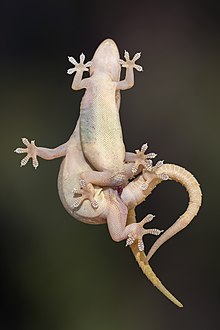 Common House Geckos, mating on a vertical glass window and showing lamellae under the feet

The pads on a gecko's feet are small hair-like processes that play a role in the animal's ability to cling to vertical surfaces. The micrometer-scale setae branch into nanometer-scale projections called spatulae.[6]

In mycology, "setae" refer to dark brown, thick-walled, thorn-like cystidia found in corticioid and poroid fungi in the family Hymenochaetaceae.[8] Though mainly microscopic, the setae of some species may be sufficiently prominent to be visible with a hand lens.

In botany, "seta" refers to the stalk supporting the capsule of a moss or liverwort, and supplying it with nutrients. The seta is part of the sporophyte and has a short foot embedded in the gametophyte on which it is parasitic. Setae are not present in all mosses, but in some species they may reach 15 to 20 centimeters in height.[9]

In the diatom family Chaetocerotaceae, "seta" refers to the hairlike outgrowths of the valve, i.e. of the face of the cells.[10] These setae have a different structure than the valve. Such setae may prevent rapid sinking and also protect the cells from grazing.

Synthetic setae are a class of synthetic adhesives that detach at will, sometimes called resettable adhesives, yet display substantial stickiness. The development of such synthetic materials is a matter of current research.[6][11][12]