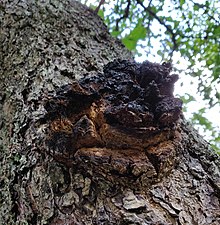 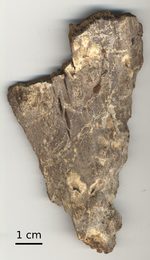 The name chaga (/ˈtʃɑːɡə/ ) comes from the Russian name of the fungus (transliterated from чага), which in turn is purportedly derived from the word for the fungus in Komi-Permyak, the language of the indigenous peoples in the Kama River Basin, west of the Ural Mountains. It is also known as the clinker polypore (from its resemblance to the slag left after a coal fire, known commonly as a "clinker" when coal fires were common), cinder conk, black mass and birch canker polypore.[6] In England and officially in Canada, it is known as the sterile conk trunk rot of birch.[7]