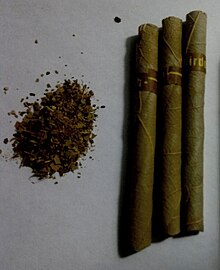 Herbal cigarettes are most often made using standard-issue rolling papers and cigarette filters.

A wide range of consumable products may be used as a filling, in lieu of tobacco. Corn silk and a number of flavorful herbs, such as mint, cinnamon or lemongrass, have been utilized by a wide number of herbal cigarette producers.[7] Other manufacturers have included non-herbs like rose petals or clover leaves. Some use the flavorless bagasse and make the herbal cigarette depend on the flavoring; this is especially common in shisha. Some are made with dried lettuce leaves or shredded cabbage leaves.

A study investigating smokers' perception on cigarette products thought of as "less harmful" than regular cigarettes found 3.3% named herbal cigarettes, which was higher than medical nicotine at 2.4%.[8]

Originating from the United Kingdom in 1947, the oldest brand of herbal cigarettes are Honeyrose and Black Swan; they are currently sold worldwide.[9][10]