The European Monitoring Centre for Drugs and Drug Addiction (EMCDDA) is an agency of the European Union located in Lisbon, Portugal. Established in 1993, the EMCDDA strives to be the "reference point" on drug usage for the European Union's member states, and to deliver "factual, objective, reliable and comparable information" about drug usage, drug addiction and related health complications, including hepatitis, HIV/AIDS and tuberculosis.[4][5]

Though the EMCDDA primarily serves Europe, it also works with other partners, scientists and policy-makers around the world.[4] 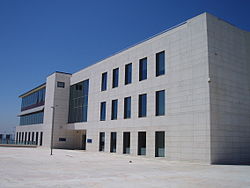 One of the two EMCDDA agency buildings in Lisbon

The EMCDDA was founded on the principle that independent scientific research is a "vital resource to help Europe understand the nature of its drug problems and better respond to them."[4]

Its stated missions are to:

Among the Centre's target groups are policy-makers, who use this information to help formulate coherent national and EU drug strategies. Also served are professionals and researchers working in the drugs field and, more broadly, the European media and general public.

At the heart of the Centre's work is the task of improving the comparability of drug information across Europe and devising the methods and tools required to achieve this. As a result of efforts to date, countries can now view how they fit into the wider European picture and examine common problems and goals. A key feature of the drug phenomenon is its shifting, dynamic nature, and tracking new developments is a central task of the EMCDDA.

The annual report on the state of the drugs problem in the European Union and Norway and an online statistical bulletin offer a yearly overview of the latest European drug situation and trends. Meanwhile, online country situation summaries provide a pool of national drug-related data.[7]

Palacete do Relógio – one of the two agency buildings in Lisbon

Limits to the effectiveness of the organisation have been identified as possible disparity in research standards and rigour between member countries. Efforts to standardise research and data collection are an essential element to maintaining consistency and validity in universal application throughout the European Union. Benefit may be gained also from more detailed and timely monitoring of emerging drug trends in fulfilling the organisation's role of providing pre-emptive responses to drug related issues. An additional challenge to the EMCDD is ensuring limited resources are effectively managed so as not to provide replication of research and risk becoming redundant.[9]

The EMCDDA is proactive in suggesting positive policy change, based on their data collection, to the organisations that can implement these changes. One such change was presented in their 2015 annual report titled 'Alternatives to punishment for drug-using offenders'. Razmadze and colleagues in their review of the EMCDDA's report supported the contention that incarcerating drug users is placing a large financial burden on states as well as doing more harm to drug users and their families. The evidence shows that this option criminalises offenders and promotes recidivism whereas treatment and rehabilitation programs provide the better option to keep both the drug user and the public safer. This alternative approach towards drug users is in keeping with the guidelines by the United Nations 1988 and the Council of the European Union in 2012.[10]

In 2013, The American Library Association recognised three EMCDDA’s publications among the notable government documents of 2012.[11]