Bromazepam, sold under many brand names, is a benzodiazepine. It is mainly an anti-anxiety agent with similar side effects to diazepam (Valium). In addition to being used to treat anxiety or panic states, bromazepam may be used as a premedicant prior to minor surgery. Bromazepam typically comes in doses of 3 mg and 6 mg tablets.[2]

Bromazepam is contraindicated and should be used with caution in women who are pregnant, the elderly, patients with a history of alcohol or other substance abuse disorders and children. Prolonged use of bromazepam causes tolerance and may lead to both physical and psychological dependence on the drug, and as a result, it is a medication which is controlled by international law.

Bromazepam is similar in side effects to other benzodiazepines. The most common side effects reported are drowsiness, sedation, ataxia, memory impairment, and dizziness.[5] Impairments to memory functions are common with bromazepam and include a reduced working memory and reduced ability to process environmental information.[6][7][8] A 1975 experiment on healthy, male college students exploring the effects of four different drugs on learning capacity observed that taking bromazepam alone at 6 mg 3 times daily for 2 weeks impaired learning capacities significantly. In combination with alcohol, impairments in learning capacity became even more pronounced.[9] Various studies report impaired memory, visual information processing and sensory data and impaired psychomotor performance;[10][11][12] deterioration of cognition including attention capacity and impaired co-ordinative skills;[13][14] impaired reactive and attention performance, which can impair driving skills;[15] drowsiness and decrease in libido.[16][17] Unsteadiness after taking bromazepam is, however, less pronounced than other benzodiazepines such as lorazepam.[18]

On occasion, benzodiazepines can induce extreme alterations in memory such as anterograde amnesia and amnesic automatism, which may have medico-legal consequences. Such reactions occur usually only at the higher dose end of the prescribing spectrum.[19]

Up to 30% treated on a long-term basis develop a form of dependence, i.e. these patients cannot stop the medication without experiencing physical and/or psychological benzodiazepine withdrawal symptoms.

Leukopenia and liver-damage of the cholestatic type with or without jaundice (icterus) have additionally been seen; the original manufacturer Roche recommends regular laboratory examinations to be performed routinely.

Ambulatory patients should be warned that bromazepam may impair the ability to drive vehicles and to operate machinery. The impairment is worsened by consumption of alcohol, because both act as central nervous system depressants. During the course of therapy, tolerance to the sedative effect usually develops.

Patients treated with bromazepam for generalised anxiety disorder were found to experience withdrawal symptoms such as a worsening of anxiety, as well as the development of physical withdrawal symptoms when abruptly withdrawn bromazepam.[24] Abrupt or over rapid withdrawal from bromazepam after chronic use even at therapeutic prescribed doses can lead to a severe withdrawal syndrome including status epilepticus and a condition resembling delerium tremens.[25][26][27]

Cimetidine, fluvoxamine and propranolol causes a marked increase in the elimination half-life of bromazepam leading to increased accumulation of bromazepam.[41][42][43] 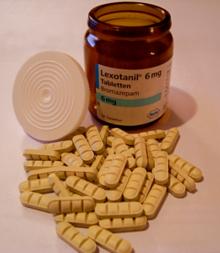 Bromazepam is a "classical" benzodiazepine; other classical benzodiazepines include: diazepam, clonazepam, oxazepam, lorazepam, nitrazepam, flurazepam, and clorazepate.[44] Its molecular structure is composed of a diazepine connected to a benzene ring and a pyridine ring, the benzene ring having a single nitrogen atom that replaces one of the carbon atoms in the ring structure.[45] It is a 1,4-benzodiazepine, which means that the nitrogens on the seven-sided diazepine ring are in the 1 and 4 positions.

Bromazepam binds to the GABA receptor GABAA, causing a conformational change and increasing the inhibitory effects of GABA. Bromazepam is a long-acting benzodiazepine and is lipophilic and metabolised hepatically via oxidative pathways.[46] It does not possess any antidepressant or antipsychotic qualities.[47]

Bromazepam alters the electrical status of the brain causing an increase in beta activity and a decrease in alpha activity in EEG recordings.[49]

Bromazepam is reported to be metabolized by a hepatic enzyme belonging to the Cytochrome P450 family of enzymes. In 2003, a team led by Oda Manami at Oita Medical University reported that CYP3A4, a member of the Cytochrome P450 family, was not the responsible enzyme since itraconazole, a known inhibitor of CYP3A4, did not affect its metabolism.[50] In 1995, J. van Harten at the Solvay Pharmaceutical Department of Clinical Pharmacology in Weesp reported that fluvoxamine, which is a potent inhibitor of CYP1A2, a less potent CYP3A4 inhibitor, and a negligible inhibitor of CYP2D6, does inhibit its metabolism.[43]

The major metabolite of bromazepam is hydroxybromazepam,[50] which is an active agent too and has a half-life approximately equal to that of bromazepam.[citation needed]

Bromazepam has a similar misuse risk as other benzodiazepines such as diazepam.[51] In France car accidents involving psychotropic drugs in combination with alcohol (itself a major contributor) found benzodiazepines, mainly diazepam, nordiazepam, and bromazepam, to be the most common drug present in the blood stream, almost twice that of the next-most-common drug cannabis.[52] Bromazepam has also been used in serious criminal offences including robbery, homicide, and sexual assault.[53][54][55]

Bromazepam is a Schedule IV drug under the Convention on Psychotropic Substances.[57]