Transdanubia can also refer to the 21st and 22nd districts of Vienna, which are the only ones lying on the left bank (eastern side), of the Danube. See Floridsdorf and Donaustadt respectively.

The borders of Transdanubia are the Danube River (north and east), the Drava and Mura rivers (south), and the foothills of the Alps roughly along the border between Hungary and Austria (west).

Transdanubia comprises the counties of Győr-Moson-Sopron, Komárom-Esztergom, Fejér, Veszprém, Vas, Zala, Somogy, Tolna, Baranya and the part of Pest that lies west of the Danube. (In the early Middle Ages the latter was known as Pilis county.)

This article deals with Transdanubia in this geographical meaning. 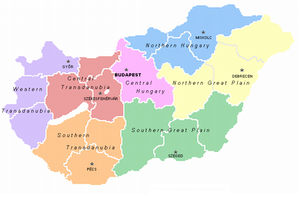 Regions in Hungary. The three Transdanubian regions in the west are shown in red, orange, and lavender.

While the northern, eastern and southern borders of the region are clearly marked by the Danube and Drava rivers, the western border was always identical with the political boundary of Hungary, therefore it was affected by the territorial changes of the 20th century. Before the Treaty of Trianon in 1920 the present-day regions of Burgenland, Prekmurje and Međimurje were integral parts of Transdanubia. The three villages of Rusovce, Jarovce and Čunovo also belonged to Transdanubia before the Paris Peace Treaty in 1947. Transdanubia is essentially a Hungarian geographical concept so these areas ceased to be parts of it when they were annexed by neighbouring countries. 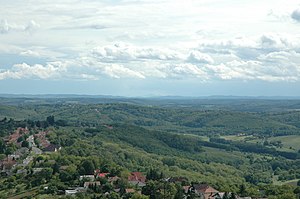 The territory of the region is 38,000 km², and it comprises almost half of the whole territory of Hungary. The terrain is very varied with gentle hills, valleys, basins, mountains and plains. The main geographical formations are the Transdanubian Mountains, the southern half of the Little Alföld, the Alpokalja, the Transdanubian Hills, and the Mezőföld (part of the Great Alföld). The main rivers are the Danube, Drava, Rába, Zala, and Kapos. In the middle of Transdanubia lies the biggest freshwater lake of Central Europe, the Lake Balaton. Other importants lakes are the Lake Velence and the Lake Fertő.

Historically the counties of Transdanubia were Moson, Győr, Sopron, Vas, Zala, Veszprém, Fejér, Komárom, Esztergom, Somogy, Tolna and Baranya. They comprised the so called Districtus Trans-Danubianus from the beginnings of the 18th century. The boundaries of these counties, established by Stephen I of Hungary remained unchanged for almost 900 years until 1920.

Transdanubia has been populated since the Stone Age. Between 10 BCE and 434 CE, it was part of the Roman Empire. With some present-day Austrian and Croatian territories, it comprised the Province of Pannonia, a romanised, Latin-speaking border region with important Roman towns (Scarbantia, Aquincum, Sopianae, Gorsium, Savaria) and rural villas.

Transdanubia has been one of the most important regions of Hungary since the 11th century. Esztergom has been the ecclesiastical capital of the country since 1001 until today, and Stephen I of Hungary established his royal seat at Székesfehérvár, later the coronation town of the kings. Other important medieval cities were Veszprém, Pécs, Győr and Sopron. After the devastating Mongol invasion (see Mongol invasion of Europe) new castles were built, and King Béla IV of Hungary established a new royal capital at Buda, next to the Danube. The region's rich medieval heritage is seen everywhere from the little village churches to the old castles, monasteries and town houses.

In the Ottoman era (16-17th centuries) the eastern and southern part of Transdanubia came under Turkish rule. The ever changing border ran along the Transdanubian Mountains and the southern shore of the Lake Balaton. The dangerous border was guarded by frontier-fortresses (végvár), the most important of which were Győr and Nagykanizsa. The Asian-style Ottoman rule and the constant war had devastating effects: dozens of villages were destroyed, the population was decimated and parts of the region became almost totally deserted. The territories belonging to the Royal Hungary (except the border regions) were more lucky, because the European-like developments were continuous. Here the 17th century was the period of the Catholic Counter-reformation, the fights for national independence from the Habsburgs and the formation of a new, powerful Catholic aristocracy.

In 1686 the allied Habsburg, Polish and Bavarian army reconquered Buda and terminated the Ottoman rule. In the 18th century the region was slowly rebuilt, and lots of new settlers (Magyars, Germans, Poles, Slovaks, and Croatians) arrived. Famous baroque castles were built to show the power of the big landowner families, for example the Esterházys in Fertőd and the Festetics in Keszthely. The baroque townscape of the cities survived until today in Győr, Székesfehérvár, Pécs etc.

In the 19th century Trandanubia underwent a capitalist development. Thanks to the closeness of Austria it became again the richest part of the country, and – at least after the public opinion – more "European" and Western-like than any other region of Hungary or most regions of post-communist Central Europe.[citation needed]

Under the People's Republic of Hungary (1949–1989) new industrial cities were built at Tatabánya, Dunaújváros, Ajka and Komló, and new industries and factories were established, for example Hungary's only atomic power plant at Paks. In Pécs uranium was mined and big industrial suburbs were built. One of the most famous plant of Socialist Hungary, the Ikarus Bus was established in Székesfehérvár. After the fall of Socialism, northern Transdanubia was more successful at adapting to the new economic situation than other parts of Hungary (except Budapest) and most of the foreign investment came here to help the radical economic renewal. In the 1990s Székesfehérvár was counted as probably the economically most successful Hungarian town. Esztergom, Győr and Szentgotthárd became centers of the automobile industry with the establishment of the Suzuki, Audi and Opel factories. On the other hand, some rural regions remained impoverished, especially in Southern Transdanubia and along the River Drave.