protein molecule receiving signals for a cell
For other uses, see Receptor (disambiguation).

An example of membrane receptors.

In biochemistry and pharmacology, receptors are chemical structures, composed of protein, that receive and transduce signals that may be integrated into biological systems.[1] These signals are typically[nb 1] chemical messengers which bind to a receptor and cause some form of cellular/tissue response, e.g. a change in the electrical activity of a cell. There are three main ways the action of the receptor can be classified: relay of signal, amplification, or integration.[2] Relaying sends the signal onward, amplification increases the effect of a single ligand, and integration allows the signal to be incorporated into another biochemical pathway.[2] In this sense, a receptor is a protein-molecule that recognizes and responds to endogenous chemical signals. For example, an acetylcholine receptor recognizes and responds to its endogenous ligand, acetylcholine. However, sometimes in pharmacology, the term is also used to include other proteins that are drug targets, such as enzymes, transporters, and ion channels.[citation needed]

Receptor proteins can be classified by their location. Transmembrane receptors include ion channel-linked (ionotropic) receptors, G protein-linked (metabotropic) hormone receptors, and enzyme-linked hormone receptors.[1] Intracellular receptors are those found inside the cell, and include cytoplasmic receptors and nuclear receptors.[1] A molecule that binds to a receptor is called a ligand, and can be a protein or peptide (short protein), or another small molecule such as a neurotransmitter, hormone, pharmaceutical drug, toxin, calcium ion or parts of the outside of a virus or microbe. The endogenously designated -molecule for a particular receptor is referred to as its endogenous ligand. E.g. the endogenous ligand for the nicotinic acetylcholine receptor is acetylcholine but the receptor can also be activated by nicotine[3][4] and blocked by curare.[5] Receptors of a particular type are linked to specific cellular biochemical pathways that correspond to the signal. While numerous receptors are found in most cells, each receptor will only bind with ligands of a particular structure. This has been analogously compared to how locks will only accept specifically shaped keys. When a ligand binds to a corresponding receptor, it activates or inhibits the receptor's associated biochemical pathway. 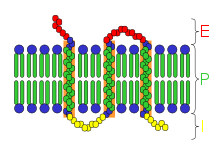 The structures of receptors are very diverse and include the following major categories, among others:

The structures and actions of receptors may be studied by using biophysical methods such as X-ray crystallography, NMR, circular dichroism, and dual polarisation interferometry. Computer simulations of the dynamic behavior of receptors have been used to gain understanding of their mechanisms of action.

Ligand binding is an equilibrium process. Ligands bind to receptors and dissociate from them according to the law of mass action in the following equation, for a ligand L and receptor, R. The brackets around chemical species denote their concentrations.

One measure of how well a molecule fits a receptor is its binding affinity, which is inversely related to the dissociation constant Kd. A good fit corresponds with high affinity and low Kd. The final biological response (e.g. second messenger cascade, muscle-contraction), is only achieved after a significant number of receptors are activated.

Not every ligand that binds to a receptor also activates that receptor. The following classes of ligands exist:

Note that the idea of receptor agonism and antagonism only refers to the interaction between receptors and ligands and not to their biological effects.

The GABAA receptor has constitutive activity and conducts some basal current in the absence of an agonist. This allows beta carboline to act as an inverse agonist and reduce the current below basal levels.

The central dogma of receptor pharmacology is that a drug effect is directly proportional to the number of receptors that are occupied.[citation needed] Furthermore, a drug effect ceases as a drug-receptor complex dissociates.

Ariëns & Stephenson introduced the terms "affinity" & "efficacy" to describe the action of ligands bound to receptors.[10][11]

As a drug approaches a receptor, the receptor alters the conformation of its binding site to produce drug—receptor complex.

In some receptor systems (e.g. acetylcholine at the neuromuscular junction in smooth muscle), agonists are able to elicit maximal response at very low levels of receptor occupancy (<1%). Thus, that system has spare receptors or a receptor reserve. This arrangement produces an economy of neurotransmitter production and release.[8]

Cells can increase (upregulate) or decrease (downregulate) the number of receptors to a given hormone or neurotransmitter to alter their sensitivity to different molecule. This is a locally acting feedback mechanism.

The ligands for receptors are as diverse as their receptors. GPCRs (7TMs) are a particularly vast family, with at least 810 members. There are also LGICs for at least a dozen endogenous ligands, and many more receptors possible through different subunit compositions. Some common examples of ligands and receptors include:[14]

Enzyme linked receptors include receptor tyrosine kinases (RTK), serine/threonine-specific protein kinase, as in bone morphogenetic protein and guanylate cyclase, as in atrial natriuretic factor receptor. Of the RTKs, 20 classes have been identified, with 58 different RTKs as members. Some examples are shown below:

Receptors may be classed based on their mechanism or on their position in the cell. 4 examples of intracellular LGIC are shown below:

Many genetic disorders involve hereditary defects in receptor genes. Often, it is hard to determine whether the receptor is nonfunctional or the hormone is produced at decreased level; this gives rise to the "pseudo-hypo-" group of endocrine disorders, where there appears to be a decreased hormonal level while in fact it is the receptor that is not responding sufficiently to the hormone.

In the immune system[edit]