Mucus produced by the respiratory system (excluding the nasal passages)
For the humor in ancient medicine, see Humorism. For the British artist, see Phlegm (artist).

Phlegm (/ˈflɛm/; Ancient Greek: φλέγμᾰ, phlégma, "inflammation", "humour caused by heat") is mucus produced by the respiratory system, excluding that produced by the nasal passages. It often refers to respiratory mucus expelled by coughing, otherwise known as sputum. Phlegm, and mucus as a whole, is in essence a water-based gel consisting of glycoproteins, immunoglobulins, lipids and other substances. Its composition varies depending on climate, genetics, and state of the immune system. Its color can vary from transparent to pale or dark yellow and green, from light to dark brown, and even to dark grey depending on the constituents. The body naturally produces one US quart (0.95 litres) of phlegm every day to capture and clear substances in the air and bacteria from the nose and throat.[1]

Distinction between mucus and phlegm[edit]

Contrary to popular misconception and misuse, mucus and phlegm are not always the same.

Mucus is a normal protective layering around the airway, eye, nasal turbinate, and urogenital tract. Mucus is an adhesive viscoelastic gel produced in the airway by submucosal glands and goblet cells and is principally water. It also contains high-molecular weight mucous glycoproteins that form linear polymers.

Phlegm is more related to disease than is mucus and can be troublesome for the individual to excrete from the body. Phlegm is a juicy secretion in the airway during disease and inflammation. Phlegm usually contains mucus with virus, bacteria, other debris, and sloughed-off inflammatory cells. Once phlegm has been expectorated by a cough, it becomes sputum.[2]

There are multiple factors that can contribute to an excess of phlegm in the throat or larynx.

Excessive phlegm creation can be troublesome. There are basically two ways to get rid of excess phlegm: swallowing or spitting.

Phlegm naturally drains down into the back of the throat and can be swallowed. Once in the stomach, the acids and digestive system will remove the phlegm and get rid of the germs in it.[15]

The alternative to swallowing would be throat-clearing. To do this, the mouth should be closed and air should be inhaled hard into the nose. Inhaling forcefully through the nose will pull excess phlegm and nasal mucus down into the throat, where muscles in the throat and tongue can prepare to eject it. Once this is done, a U-shape should be formed with the tongue, while simultaneously forcing air and saliva forward with the muscles at the back of the throat. At this point, the phlegm will be in the mouth and is now ready to be spat out as sputum.[15]

Phlegm can exist in different colors. The color could provide important clues about a person's health.[15]

Humourism is an ancient theory that the human body is filled with four basic substances, called the four humours, which are held in balance when a person is healthy. It is closely related to the ancient theory of the four elements and states that all diseases and disabilities result from an excess or deficit in black bile, yellow bile, phlegm, and blood. Hippocrates, an ancient Greek medical doctor, is credited for this theory, about 400 BC. It influenced medical thinking for more than 2,000 years, until finally discredited in the 1800s.

Phlegm was thought to be associated with apathetic behaviour; this old belief is preserved in the word "phlegmatic". This adjective always refers to behaviour, and is pronounced differently, giving full weight to the "g": not /ˈflɛmatɪk/ but /flɛgˈmatɪk/.[16] To have "phlegm" traditionally meant to have stamina and to be unswayed by emotion. Sir William Osler’s 1889 Aequanimitas discusses the imperturbability or calmness in a storm required of physicians. "'Imperturbability means coolness and presence of mind under all circumstances, calmness amid storm, clearness of judgment in moments of grave peril, immobility, impassiveness, or, to use an old and expressive word, phlegm." This was his farewell speech at the University of Pennsylvania in 1889 before becoming Physician-in-Chief at the recently founded Johns Hopkins Hospital in Baltimore, Maryland. This is from "Celebrating the Contributions of William Osler" in the Alan Mason Chesney Medical Archives of the Johns Hopkins Medical Institutions."

The phlegm of Humourism is far from the same thing as phlegm as it is defined today. Nobel laureate Charles Richet MD, when describing humorism's "phlegm or pituitary secretion" in 1910 asked rhetorically, "this strange liquid, which is the cause of tumours, of chlorosis, of rheumatism, and cacochymia - where is it? Who will ever see it? Who has ever seen it? What can we say of this fanciful classification of humours into four groups, of which two are absolutely imaginary?"[17]

Phlegm may be a carrier of larvae of intestinal parasites (see hookworm). Bloody sputum can be a symptom of serious disease (such as tuberculosis), but can also be a relatively benign symptom of a minor disease (such as bronchitis). In the latter case, the sputum is normally lightly streaked with blood. Coughing up any significant quantity of blood is always a serious medical condition, and any person who experiences this should seek medical attention. 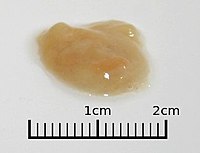 Apophlegmatisms, in pre-modern medicine, were medications chewed in order to draw away phlegm and humours.