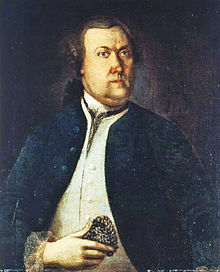 A picture commonly believed to portray Pehr Kalm, although some modern-day historians have suggested it may be of Kalm's colleague Pehr Gadd [fi].[1]

Pehr Kalm (6 March 1716 – 16 November 1779), also known as Peter Kalm, was a Swedish explorer, botanist, naturalist, and agricultural economist. He was one of the most important apostles of Carl Linnaeus.

In 1747 he was commissioned by the Royal Swedish Academy of Sciences to travel to the North American colonies and to bring back seeds and plants that might be useful to agriculture. Among his many scientific accomplishments, Kalm can be credited with the first description of Niagara Falls written by a trained scientist; he described this phenomenon along the border of New York (United States) and Canada.[2] In addition, he published the first scientific paper on the North American 17-year periodical cicada, Magicicada septendecim.

Kalm wrote an account of his travels that was translated into numerous European languages; a 20th-century translation remains in print in English as Peter Kalm's Travels in North America: The English Version of 1770, translated by Swedish-American scholar Adolph B. Benson.

Kalm was born to Gabriel Kalm and Katarina Ross in Ångermanland, Sweden where his parents had taken refuge from Finland during the Great Northern War. His father was a Finnish clergyman and his mother was of Scottish ancestry.[3] His father died six weeks after his birth. When the hostilities were over, his widowed mother returned with him to Närpes in Ostrobothnia, where Kalm's father had been a Lutheran minister.

Kalm studied at the Royal Academy of Turku from 1735. In 1740 he entered the University of Uppsala, where he became one of the first students of the renowned naturalist Carl Linnaeus. In Uppsala, Kalm became the superintendent of an experimental plantation owned by his patron, Baron Sten Karl Bielke.[4]

Kalm did field research in Sweden, Russia, and Ukraine from 1742 to 1746, when he was appointed Docent of Natural History and Economics at the Royal Academy of Turku. In 1747 the Academy elevated him to Professor of Economics. That same year he was also appointed by Linnaeus and the Royal Swedish Academy of Sciences (which he had been a member of since 1745) to travel to North America to find seeds and plants that might prove useful for agriculture or industry. In particular, they wanted him to bring back the red mulberry in the hope of starting a silk industry in Finland (which was then an integral part of Sweden, today also known as Sweden-Finland).

On his journey from Sweden to Philadelphia, Pennsylvania, Kalm spent six months in England, where he met many of the important botanists of the day. Kalm arrived in Pennsylvania in 1748; there he was befriended by Benjamin Franklin and naturalist John Bartram. Kalm based his explorations at the Swedish-Finnish community of Raccoon (now Swedesboro) in southern New Jersey. This town had been founded as part of the former Swedish colony of New Sweden. There he also served as the substitute pastor of Trinity Church, the local Swedish Lutheran church. Kalm subsequently married Anna Margaretha Sjöman, the widow of Johan Sandin, the former pastor. He remained in Raccoon until 19 May 1749.[5]

Kalm made trips as far west as Niagara Falls and as far north as Montreal and Quebec before returning to Finland in 1751. He took a post as professor at the Royal Academy of Turku. In addition to teaching and directing students, he established botanical gardens in Turku. He taught at the Academy until his death in Turku in 1771.[6]

Anders Chydenius, another noted scientist from territories that later were part of Finland, was a student of Pehr Kalm's. 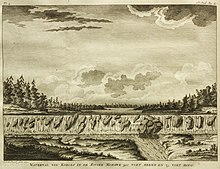 Illustration of Cohoes Falls, from the book En Resa til Norra America by Pehr Kalm.
The standard author abbreviation Kalm is used to indicate this person as the author when citing a botanical name.[13]