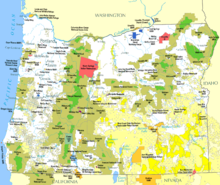 Land use in Oregon concerns the evolving set of laws affecting land ownership and its restrictions in the U.S. state of Oregon.

William Charles Morris cartoon, illustrating the prediction of Secretary of the Interior Gifford Pinchot, who warned U.S. timber resources in the west would be depleted.