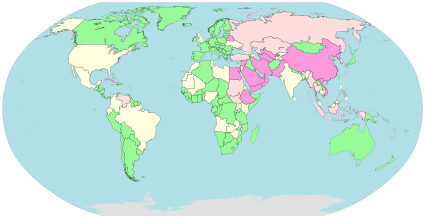 Detailed country by country information on Internet censorship and surveillance is provided in the Freedom on the Net reports from Freedom House, by the OpenNet Initiative, by Reporters Without Borders, and in the Country Reports on Human Rights Practices from the U.S. State Department Bureau of Democracy, Human Rights, and Labor. The ratings produced by several of these organizations are summarized below as well as in the Censorship by country article.

Freedom on the Net reports[edit]

The Freedom on the Net reports provide analytical reports and numerical ratings regarding the state of Internet freedom for countries worldwide.[6] The countries surveyed represent a sample with a broad range of geographical diversity and levels of economic development, as well as varying levels of political and media freedom. The surveys ask a set of questions designed to measure each country's level of Internet and digital media freedom, as well as the access and openness of other digital means of transmitting information, particularly mobile phones and text messaging services.

Results are presented for three areas:

In a series of reports issued between 2007 and 2013 the OpenNet Initiative (ONI) classified the magnitude of censorship or filtering occurring in a country in four areas of activity.[14]

The magnitude or level of censorship was classified as follows:

Pervasive: A large portion of content in several categories is blocked.
Substantial: A number of categories are subject to a medium level of filtering or many categories are subject to a low level of filtering.
Selective: A small number of specific sites are blocked or filtering targets a small number of categories or issues.
Suspected: It is suspected, but not confirmed, that Web sites are being blocked.
No evidence: No evidence of blocked Web sites, although other forms of controls may exist.

The classifications were done for the following areas of activity:

Due to legal concerns the OpenNet Initiative does not check for filtering of child pornography and because their classifications focus on technical filtering, they do not include other types of censorship.

After a decade of collaboration in the study and documentation of Internet filtering and control mechanisms around the world, the OpenNet Initiative partners will no longer carry out research under the ONI banner. The ONI website, including all reports and data, will be maintained indefinitely to allow continued public access to their entire archive of published work and data.

RWB Enemies of the Internet and Countries under Surveillance lists[edit]

In 2006, Reporters without Borders (Reporters sans frontières, RSF), a Paris-based international non-governmental organization that advocates freedom of the press, started publishing a list of "Enemies of the Internet".[18] The organization classifies a country as an enemy of the internet because "all of these countries mark themselves out not just for their capacity to censor news and information online but also for their almost systematic repression of Internet users."[19] In 2007 a second list of countries "Under Surveillance" (originally "Under Watch") was added.[20]

The five "State Enemies of the Internet" named in March 2013 are: Bahrain, China, Iran, Syria, and Vietnam.[21]

Country Reports on Human Rights Practices is an annual series of reports on human rights conditions in countries throughout the world. Among other topics the reports include information on freedom of speech and the press including Internet freedom; freedom of assembly and association; and arbitrary interference with privacy, family, home, or correspondence.[22]

The reports are prepared by the Bureau of Democracy, Human Rights, and Labor within the United States Department of State. The reports cover internationally recognized individual, civil, political, and worker rights, as set forth in the Universal Declaration of Human Rights. The first report was issued in 1977 covering the year 1976.[23]

Internet censorship and surveillance by continent[edit]

Main article: Internet censorship and surveillance in the Americas