Test-tube experiments
This article is about the type of scientific experiment. For other uses, see In vitro (disambiguation).

In vitro (meaning: in the glass) studies are performed with microorganisms, cells, or biological molecules outside their normal biological context. Colloquially called "test-tube experiments", these studies in biology and its subdisciplines are traditionally done in labware such as test tubes, flasks, Petri dishes, and microtiter plates. Studies conducted using components of an organism that have been isolated from their usual biological surroundings permit a more detailed or more convenient analysis than can be done with whole organisms; however, results obtained from in vitro experiments may not fully or accurately predict the effects on a whole organism. In contrast to in vitro experiments, in vivo studies are those conducted in living organisms, including humans, and whole plants.

In vitro (Latin: in glass; often not italicized in English[1][2][3]) studies are conducted using components of an organism that have been isolated from their usual biological surroundings, such as microorganisms, cells, or biological molecules. For example, microorganisms or cells can be studied in artificial culture media, and proteins can be examined in solutions. Colloquially called "test-tube experiments", these studies in biology, medicine, and their subdisciplines are traditionally done in test tubes, flasks, Petri dishes, etc. They now involve the full range of techniques used in molecular biology, such as the omics.

Examples of in vitro studies include: the isolation, growth and identification of cells derived from multicellular organisms in (cell or tissue culture); subcellular components (e.g. mitochondria or ribosomes); cellular or subcellular extracts (e.g. wheat germ or reticulocyte extracts); purified molecules such as proteins, DNA, or RNA); and the commercial production of antibiotics and other pharmaceutical products. Viruses, which only replicate in living cells, are studied in the laboratory in cell or tissue culture, and many animal virologists refer to such work as being in vitro to distinguish it from in vivo work in whole animals.

Living organisms are extremely complex functional systems that are made up of, at a minimum, many tens of thousands of genes, protein molecules, RNA molecules, small organic compounds, inorganic ions, and complexes in an environment that is spatially organized by membranes, and in the case of multicellular organisms, organ systems.[7] These myriad components interact with each other and with their environment in a way that processes food, removes waste, moves components to the correct location, and is responsive to signalling molecules, other organisms, light, sound, heat, taste, touch, and balance. 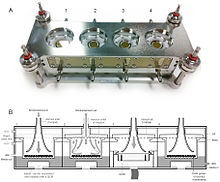 Top view of a Vitrocell mammalian exposure module "smoking robot", (lid removed) view of four separated wells for cell culture inserts to be exposed to tobacco smoke or an aerosol for an in vitro study of the effects

This complexity makes it difficult to identify the interactions between individual components and to explore their basic biological functions. In vitro work simplifies the system under study, so the investigator can focus on a small number of components.[8][9]

For example, the identity of proteins of the immune system (e.g. antibodies), and the mechanism by which they recognize and bind to foreign antigens would remain very obscure if not for the extensive use of in vitro work to isolate the proteins, identify the cells and genes that produce them, study the physical properties of their interaction with antigens, and identify how those interactions lead to cellular signals that activate other components of the immune system.

Another advantage of in vitro methods is that human cells can be studied without "extrapolation" from an experimental animal's cellular response.[10]

In vitro methods can be miniaturized and automated, yielding high-throughput screening methods for testing molecules in pharmacology or toxicology [11]

The primary disadvantage of in vitro experimental studies is that it may be challenging to extrapolate from the results of in vitro work back to the biology of the intact organism. Investigators doing in vitro work must be careful to avoid over-interpretation of their results, which can lead to erroneous conclusions about organismal and systems biology.[12]

For example, scientists developing a new viral drug to treat an infection with a pathogenic virus (e.g. HIV-1) may find that a candidate drug functions to prevent viral replication in an in vitro setting (typically cell culture). However, before this drug is used in the clinic, it must progress through a series of in vivo trials to determine if it is safe and effective in intact organisms (typically small animals, primates, and humans in succession). Typically, most candidate drugs that are effective in vitro prove to be ineffective in vivo because of issues associated with delivery of the drug to the affected tissues, toxicity towards essential parts of the organism that were not represented in the initial in vitro studies, or other issues.[13]

In vitro to in vivo extrapolation[edit]

Main article: In vitro to in vivo extrapolation

Results obtained from in vitro experiments cannot usually be transposed, as is, to predict the reaction of an entire organism in vivo. Building a consistent and reliable extrapolation procedure from in vitro results to in vivo is therefore extremely important. Solutions include:

These two approaches are not incompatible; better in vitro systems provide better data to mathematical models. However, increasingly sophisticated in vitro experiments collect increasingly numerous, complex, and challenging data to integrate. Mathematical models, such as systems biology models, are much needed here.[citation needed]

In pharmacology, IVIVE can be used to approximate pharmacokinetics (PK) or pharmacodynamics (PD).[citation needed] Since the timing and intensity of effects on a given target depend on the concentration time course of candidate drug (parent molecule or metabolites) at that target site, in vivo tissue and organ sensitivities can be completely different or even inverse of those observed on cells cultured and exposed in vitro. That indicates that extrapolating effects observed in vitro needs a quantitative model of in vivo PK. Physiologically based PK (PBPK) models are generally accepted to be central to the extrapolations.[16]

In the case of early effects or those without intercellular communications, the same cellular exposure concentration is assumed to cause the same effects, both qualitatively and quantitatively, in vitro and in vivo. In these conditions, developing a simple PD model of the dose–response relationship observed in vitro, and transposing it without changes to predict in vivo effects is not enough.[17]