Eurojust is an agency of the European Union (EU) dealing with judicial co-operation in criminal matters among agencies of the member states. It is seated in The Hague, Netherlands. Established in 2002, it was created to improve handling of serious cross-border and organised crime by stimulating investigative and prosecutorial co-ordination.

Eurojust is composed of a college formed of 27 national members—experienced judges, prosecutors, or police officers of equivalent competence from each EU member state. The terms and duties of the members are defined by the state that appoints them. Eurojust also co-operates with third states and other EU bodies such as the European Judicial Network, Europol and the OLAF.

Eurojust was established as a result of a decision that the European Council of Tampere (15–16 October 1999) made to set up a permanent judicial co-operation unit in order to improve the fight against serious crime.[1] The Treaty of Nice amended the Treaty on the European Union to include a reference to Eurojust.[2] On 14 December 2000, a precursor organization called Pro-Eurojust was created by the Council of the European Union to permit prosecutors to test the Eurojust processes. It began operating in Brussels on 1 March 2001.[3] The terrorist attacks in the U.S. in September of that year demonstrated strongly the need for international cooperation, speeding the development of Eurojust, which was then established in February 2002 by Council Decision 2002/187/JHA.[4][5] The new organization settled in The Hague on 29 April 2003.[6]

Since its establishment, Eurojust has focused heavily on forging international co-operation agreements and building out international contact points, including the basing at Eurojust of several liaison prosecutors (Norway, Switzerland, Montenegro and the United States).[3] In addition to these four nations, it has co-operation agreements with Europol, OLAF, CEPOL, the European Judicial Training Network, UNODC, Iber-RED,[7] Croatia (before it entered the European Union on 1 July 2013, thus joining EUROJUST), Iceland, and North Macedonia.[3]

The New Council Decision on the Strengthening of Eurojust was signed in July 2008 to enhance Eurojust's cooperation with partners and third States and to generally strengthen its operational capabilities.[3]

Types of crimes and offences[edit]

The Eurojust building in the World Forum area of The Hague 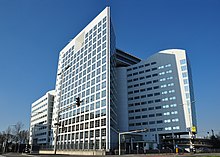 The former Eurojust building in The Hague, formerly the interim HQ of the ICC

Eurojust's primary focus are on crimes that represent an "especial threat" to citizens, such as terrorism, drug trafficking, trafficking in human beings, cybercrime, fraud, corruption, money laundering and other economic crime.[10]

Eurojust's tasks may vary depending on whether it is acting a college or through national members. Among other tasks, Eurojust may:[4]

As Eurojust is tasked with facilitating the execution of letters rogatory and extradition requests, it also may act on European Arrest Warrants (EAW).[16] When more than one EAW exists for one individual, Eurojust may advise the judicial authority that executes the EAW which should take priority and may also facilitate communication between the judicial authorities involved. It is also the body to which member states may report delays in execution of EAWs of the reason for such delay. In 2010, a total of 280 cases concerning the execution of EAWs were registered at Eurojust, amounting to almost 20 per cent of all cases.[10]

Eurojust may also take part in a joint investigation team (JIT) or, on request of a member state, help establish one and/or assist in managing one administratively or by securing funding. Such teams are created on the agreement of two or more involved parties for a specific purpose and limited time to carry out criminal investigations in one or more of the member states involved.[17][18] JITs were established on the belief that cross-state teams of investigators and judicial authorities with clear legal authority and defined roles would improve the fight against organised crime.[19]

Eurojust has handled an increasingly heavy caseload since its creation. In 2002, it was contacted in 202 cases. In 2016, member states sought assistance with 2,306 new cases. The majority cases involve two member states; in 2010, one-fifth of the cases involved three or more countries. Eurojust also organised 249 co-ordination meetings between representatives of national authorities and EU bodies in 2016.[20]

The Treaty on the Functioning of the European Union addresses several changes to Eurojust. Article 85 extends its scope to including serious crime not only affecting two or more member states, but also requiring prosecution on a common basis. The new wording of the Treaty mentions that by means of regulations adopted in accordance with the ordinary legislative procedure, the European Parliament and the Council shall determine Eurojust's structure, operation, field of action and tasks, which may include initiating criminal investigations or proposing the initiation of prosecutions, coordinating such investigations and prosecutions and strengthening judicial co-operation. Article 86 provides for the possibility of establishing a European Public Prosecutor’s Office (EPPO) from Eurojust in order to combat crimes affecting the financial interests of the Union. The EPPO may be established by the Council, according to a special legislative procedure, acting unanimously and after obtaining the consent of the European Parliament. The Treaty provides also for the possibility to create it by enhanced co-operation established by at least nine Member States.[22]

The Stockholm Programme refers several times to the role of Eurojust. In particular, it states that “in the field of judicial co-operation, the European Council emphasises the need for Member States and Eurojust to implement thoroughly Council Decision 2009/426/JHA of 16 December 2008 on the strengthening of Eurojust, which, together with the Lisbon Treaty, offers an opportunity for the further development of Eurojust in the coming years, including in relation to initiation of investigations and resolving conflicts of competence. On the basis of an assessment of the implementation of this instrument, new possibilities could be considered in accordance with the relevant provisions of the Treaty, including giving further powers to the Eurojust national members, reinforcement of the powers of the College of Eurojust or the setting-up of a European Public Prosecutor”.