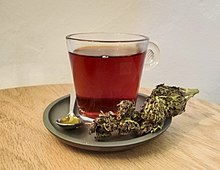 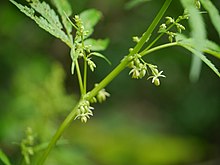 According to a 2007 study published in the Journal of Ethnopharmacology, the composition of cannabis tea is affected by criterion including, but not limited to, the duration of time over which the cannabis is steeped, the volume of tea prepared, and the period of time for which the tea is stored before consumption.[4] The study mentions the ways in which levels of THC and THCA impact variability of composition by changing the bioactivity of the beverage. Therefore, cannabis teas that include less bioactive cannabinoids, "based on HPLC peak area"[4] will demonstrate varying compositions.

Cannabis tea was used for centuries in folk medicine as it was thought to be a treatment for rheumatism, cystitis, and various urinary diseases.[6]