10th Hussars, 1793, by George Stubbs; the regiment was known at this time for its elaborate and expensive uniforms

The regiment was formed at Hertford in 1715 as Gore's Regiment of Dragoons, one of 16 raised in response to the 1715 Jacobite rising.[1] The Rising ended before the unit was ready for action; while most of these temporary formations were disbanded in 1718, Gore's remained in being and spent the next 25 years on garrison duty, primarily in the West Country.[2] It first saw active service during the 1745 rising, at the Battle of Falkirk Muir in January 1746[3] and the Battle of Culloden in April.[4] As part of the reforms enacted by the Duke of Cumberland, it was retitled the 10th Regiment of Dragoons in 1751.[1]

During the 1756 to 1763 Seven Years' War, it took part in the June 1758 Raid on St Malo,[5] followed by the battles of Minden in August 1759,[6] Warburg in July 1760 and Kloster Kampen in October, where the commanding officer, Colonel William Pitt, was badly wounded and taken prisoner.[7] It then fought in the Allied victory at Villinghausen in July 1761, which forced the French onto the defensive and ultimately led to the Treaty of Paris in 1763.[8]

In 1779, the light troop was detached to form the 19th Regiment of (Light) Dragoons; in 1783, it became the 10th (Prince of Wales's Own) Regiment of (Light) Dragoons in honour of the future King George IV.[1] As a result of its connection with the Prince of Wales, the regiment became known for elaborate and expensive uniforms and the high personal income required to be an officer.[9] In June 1794, Beau Brummell, an arbiter of men's fashion in Regency London, was given a commission as cornet but resigned in 1795 when it moved from London to Manchester.[10]

The Prince of Wales dressed as Colonel of the 10th Hussars, 1860s 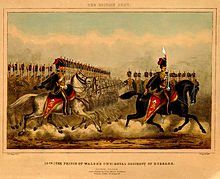 The regiment was sent to India in 1846 and then saw action at the Siege of Sevastopol in winter 1854 and at the Battle of Eupatoria in February 1855 during the Crimean War.[13] In 1861, it was renamed the 10th (The Prince of Wales's Own) Royal Hussars.[1] The regiment saw action at the Battle of Ali Masjid in November 1878 during the Second Anglo-Afghan War[21] and at the First and Second Battles of El Teb in February 1884 during the Mahdist War.[22]

Men of the 10th Hussars with Nordenfelt 5 barrel machine gun, 1887

With the outbreak of the Second Boer War, the regiment sailed for South Africa in November 1899. After fighting at Colesberg, the regiment participated in the relief of Kimberley in February 1900.[23] It was also involved at the Battle of Diamond Hill in June 1900.[23] Following the end of the war in 1902 they went to India. Almost 375 officers and men left Cape Town on the SS Lake Manitoba in September 1902,[24] arriving at Bombay the following month and was then stationed at Mhow in Bombay Presidency.[25]

The regiment was next deployed in action on the North-West Frontier in 1909.[13]

The regiment, which was based at Potchefstroom in South Africa at the start of the war, returned to the UK and then landed at Ostend with the 6th Cavalry Brigade in the 3rd Cavalry Division in October 1914 as part of the British Expeditionary Force for service on the Western Front.[26]

After the war the regiment saw brief service in Ireland. On 22 June 1921 it provided the royal escort for King George V when he opened the first Parliament of Northern Ireland. Two days later the train carrying the detachment back to the south was mined, killing and wounding twenty-four hussars and eighty of their horses.[27] The regiment returned to the UK in 1921 and was retitled the 10th Royal Hussars (Prince of Wales's Own).[1] Deploying to Egypt in 1929 and India in 1930, the regiment returned to the UK in 1936 and began the process of mechanisation.[1] It was assigned to the 2nd Armoured Brigade of the 1st Armoured Division in 1939. At the same time, it became part of the Royal Armoured Corps.[1]

With the outbreak of war, the 1st Armoured Division deployed to France. It fought in northern France and Belgium, returning to England without any vehicles in June 1940. In December 1940, a group of personnel was detached to form the cadre of the 23rd Hussars.[1] In November 1941, the regiment deployed to North Africa with the 2nd Armoured Brigade, joining 7th Armoured Division. Now equipped with Crusader tanks, it saw action in Operation Crusader, at the Battle of Alam el Halfa in August 1942 and at the Second Battle of El Alamein in October 1942. At El Alamein the regiment captured General Wilhelm Ritter von Thoma, the German Deputy Commander.[13] The regiment then fought both as an armoured unit and as dismounted infantry during the Italian Campaign in 1944 and 1945.[13] 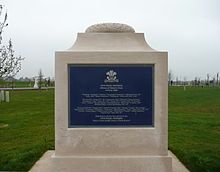 The regiment was deployed to Lübeck in Germany as an armoured regiment in the British Army of the Rhine in 1946.[28] It moved to Epsom Barracks in Iserlohn in 1948 and then returned to the UK in July 1953.[28] It then deployed to Aqaba in Jordan in February 1956 in operations in support of the Jordanian Government: 19 members of the regiment were killed in an air crash at El Quweira in April 1957.[29] After returning to the UK again in July 1957, the regiment moved to Swinton Barracks in Munster in July 1959 and then transferred to Barker Barracks in Paderborn in June 1960.[28] It returned home again in March 1964 and then deployed to Aden in August 1964 during the Aden Emergency.[28] The regiment moved to York Barracks in Munster in September 1965 and after returning home in September 1969, amalgamated with the 11th Hussars (Prince Albert's Own) to form the Royal Hussars (Prince of Wales's Own) in October 1969.[1]

The regimental collection is held by HorsePower: The Museum of the King's Royal Hussars which is based at Peninsula Barracks in Winchester.[30]

The regiment’s battle honours were as follows:[1]

The regiment wore standard red dragoon coats with "deep yellow" facings until the dark blue uniform and crested helmet of light dragoon was authorized in 1784. Hussar dress was adopted through a series of separate measures, culminating with the introduction of a busby in 1809. Until 1914 the entire regiment wore dark blue hussar uniform for full dress with a red busby bag, yellow braiding, white plume and yellow stripes on their riding breeches. Officers had a distinctive pattern of criss-crossed gilt metal decoration on their pouch-belts, which gave the regiment its nickname of "The Chainy 10th".[31]

Colonels of the Regiment were:[1]