For other uses, see Valerian (disambiguation).
species of flowering plant in the honeysuckle family Caprifoliaceae

Valerian (Valeriana officinalis, Caprifoliaceae) is a perennial flowering plant native to Europe and Asia.[1] In the summer when the mature plant may have a height of 1.5 metres (5 ft), it bears sweetly scented pink or white flowers that attract many fly species, especially hoverflies of the genus Eristalis.[2] It is consumed as food by the larvae of some Lepidoptera (butterfly and moth) species, including the grey pug.

Crude extract of valerian root may have sedative and anxiolytic effects, and is commonly sold in dietary supplement capsules to promote sleep.[1]

Valerian has been used as a medicinal herb since at least the time of ancient Greece and Rome. Hippocrates described its properties, and Galen later prescribed it as a remedy for insomnia. In medieval Sweden, it was sometimes placed in the wedding clothes of the groom to ward off the "envy" of the elves.[3] In the 16th century, the Anabaptist reformer Pilgram Marpeck prescribed valerian tea for a sick woman.[4]

John Gerard's Herball, first published in 1597, states that his contemporaries found Valerian "excellent for those burdened and for such as be troubled with croup and other like convulsions, and also for those that are bruised with falls." He says that the dried root was valued as a medicine by the poor in the north of England and the south of Scotland, so that "no broth or pottage or physicall meats be worth anything if Setewale [Valerian] be not there."[5]

The seventeenth century astrological botanist Nicholas Culpeper thought the plant was "under the influence of Mercury, and therefore hath a warming faculty." He recommended both herb and root, and said that "the root boiled with liquorice, raisons and aniseed is good for those troubled with cough. Also, it is of special value against the plague, the decoction thereof being drunk and the root smelled. The green herb being bruised and applied to the head taketh away pain and pricking thereof."[5]

The name of the herb is derived from the personal name Valeria and the Latin verb valere (to be strong, healthy).[6][7] Other names used for this plant include garden valerian (to distinguish it from other Valeriana species), garden heliotrope (although not related to Heliotropium), setwall and all-heal (which is also used for plants in the genus Stachys). Red valerian, often grown in gardens, is also sometimes referred to as "valerian", but is a different species (Centranthus ruber), from the same family but not very closely related.

Known compounds detected in valerian that may contribute to its method of action are:

Because of valerian's historical use in traditional medicine for diverse purposes, such as for sedation or pain relief, laboratory research has been directed at the GABAA receptor, a class of receptors on which benzodiazepines act.[15][16] Valeric acid[clarification needed]which is responsible for the typical odor of mostly older valerian roots, does not have any sedative properties. Valproic acid, a widely prescribed anticonvulsant is a derivative of valeric acid.[clarification needed]

Valerian also contains isovaltrate, which has been shown to be an inverse agonist for adenosine A1 receptor sites. This action likely does not contribute to the herb's possible sedative effects, which would be expected from an agonist, rather than an inverse agonist, at this particular binding site. Hydrophilic extractions of the herb commonly sold over the counter, however, probably do not contain significant amounts of isovaltrate.[17] Valerenic acid in valerian stimulates serotonin receptors as a partial agonist,[18] including 5-HT5A which is implicated in the sleep-wake cycle.[19]

The chief constituent of valerian is a yellowish-green to brownish-yellow oil present in the dried root, varying in content from 0.5 to 2.0%. This variation in quantity may be determined by location; a dry, stony soil yields a root richer in oil than moist, fertile soil.[20] The volatile oils that form the active ingredient are pungent, somewhat reminiscent of well-matured cheese. Though some people remain partial to the earthy scent, others find it unpleasant, comparing the odor to that of unwashed feet.[21] 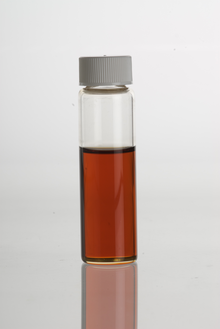 Although valerian is a common traditional medicine used for treating insomnia, there is no good evidence it is effective for this purpose.[22] Valerian is not helpful in treating restless leg syndrome[23] or anxiety.[24] There is insufficient evidence for efficacy and safety of valerian for anxiety disorders.[25]

The European Medicines Agency (EMA) approved the health claim that valerian can be used as a traditional herbal medicine to relieve mild nervous tension and to aid sleep; EMA stated that although there is insufficient evidence from clinical studies, its effectiveness as a dried extract is considered plausible.[26]

Oral forms, use, and adverse effects[edit]

A bottle of Valerian capsules

Oral forms are available in both standardized and unstandardized forms. Standardized products may be preferable considering the wide variation of the chemicals in the dried root, as noted above. When standardized, it is done so as a percentage of valerenic acid or valeric acid.

Because the compounds in valerian produce central nervous system depression, they should not be used with other depressants, such as ethanol (drinking alcohol), benzodiazepines, barbiturates, opiates, kava, or antihistamine drugs.[27][28][29] Although no liver problems are normally encountered with valerian use, there have been case studies in which hepatotoxicity has been observed in apparently hypersensitive individuals following short-term use (e.g. one month).[30][31]

As an unregulated product, the concentration, contents, and potential contaminants in valerian preparations cannot be easily determined. Because of this uncertainty and the potential for toxicity in the fetus and hepatotoxicity in the mother, valerian use is discouraged during pregnancy.[27][28]

Valerian root is a cat attractant in a way similar to catnip.[32]

Valerian is unusual in having flowers with "handedness", that is, having neither radial nor bilateral symmetry.[33]

Valerian is considered an invasive species in many jurisdictions, including the US state of Connecticut where it is officially banned,[34] and in New Brunswick, Canada where it is listed as a plant of concern.[35]