The thalamus (from Greek θάλαμος, "chamber")[1] is a large mass of gray matter located in the dorsal part of the diencephalon (a division of the forebrain). Nerve fibers project out of the thalamus to the cerebral cortex in all directions, allowing hub-like exchanges of information. It has several functions, such as relaying of sensory signals, including motor signals to the cerebral cortex,[2][3][page needed] and the regulation of consciousness, sleep, and alertness.[4]

Anatomically, it is a midline symmetrical structure of two halves (left and right), within the vertebrate brain, situated between the cerebral cortex and the midbrain. It forms during embryonic development as the main product of the diencephalon, as first recognized by the Swiss embryologist and anatomist Wilhelm His Sr. in 1893.[5]

The thalamus in a 360° rotation

The thalamus is a paired structure of gray matter located in the forebrain which is superior to the midbrain, near the center of the brain, with nerve fibers projecting out to the cerebral cortex in all directions. The medial surface of the thalamus constitutes the upper part of the lateral wall of the third ventricle, and is connected to the corresponding surface of the opposite thalamus by a flattened gray band, the interthalamic adhesion. The lateral part of the thalamus is the phylogenetically newest part of the thalamus (neothalamus), and includes the lateral nuclei, the pulvinar and the medial and lateral geniculate nuclei.[6][7] There are areas of white matter in the thalamus including the stratum zonale that covers the dorsal surface, and the external and internal medullary laminae. The external lamina covers the lateral surface and the internal lamina divides the nuclei into anterior, medial and lateral groups.[8]

The thalamus derives its blood supply from a number of arteries: the polar artery (posterior communicating artery), paramedian thalamic-subthalamic arteries, inferolateral (thalamogeniculate) arteries, and posterior (medial and lateral) choroidal arteries.[9] These are all branches of the posterior cerebral artery.[10]

Some people have the artery of Percheron, which is a rare anatomic variation in which a single arterial trunk arises from the posterior cerebral artery to supply both parts of the thalamus. 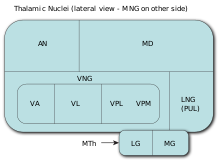 Nuclei of the thalamus

,[11][need quotation to verify] and metathalamus.

Derivatives of the diencephalon also include the dorsally-located epithalamus (essentially the habenula and annexes) and the perithalamus (prethalamus) containing the zona incerta and the thalamic reticular nucleus. Due to their different ontogenetic origins, the epithalamus and the perithalamus are formally distinguished from the thalamus proper. The metathalamus is made up of the lateral geniculate and medial geniculate nuclei.

The thalamus comprises a system of lamellae (made up of myelinated fibers) separating different thalamic subparts. Other areas are defined by distinct clusters of neurons, such as the periventricular nucleus, the intralaminar elements, the "nucleus limitans", and others.[12] These latter structures, different in structure from the major part of the thalamus, have been grouped together into the allothalamus as opposed to the isothalamus.[13] This distinction simplifies the global description of the thalamus.

The thalamus is connected to the spinal cord via the spinothalamic tract.

The thalamus has many connections to the hippocampus via the mammillothalamic tract, this tract comprises the mammillary bodies and fornix.[14]

The thalamus is connected to the cerebral cortex via the thalamocortical radiations.[15]

The thalamus has multiple functions, generally believed to act as a relay station, or hub, relaying information between different subcortical areas and the cerebral cortex.[16] In particular, every sensory system (with the exception of the olfactory system) includes a thalamic nucleus that receives sensory signals and sends them to the associated primary cortical area.[citation needed] For the visual system, for example, inputs from the retina are sent to the lateral geniculate nucleus of the thalamus, which in turn projects to the visual cortex in the occipital lobe.[citation needed] The thalamus is believed to both process sensory information as well as relay it—each of the primary sensory relay areas receives strong feedback connections from the cerebral cortex.[citation needed] Similarly the medial geniculate nucleus acts as a key auditory relay between the inferior colliculus of the midbrain and the primary auditory cortex.[citation needed] The ventral posterior nucleus is a key somatosensory relay, which sends touch and proprioceptive information to the primary somatosensory cortex.[citation needed]

The thalamus also plays an important role in regulating states of sleep and wakefulness.[17] Thalamic nuclei have strong reciprocal connections with the cerebral cortex, forming thalamo-cortico-thalamic circuits that are believed to be involved with consciousness.[18] The thalamus plays a major role in regulating arousal, the level of awareness, and activity. Damage to the thalamus can lead to permanent coma.[19]

The role of the thalamus in the more anterior pallidal and nigral territories in the basal ganglia system disturbances is recognized but still poorly understood. The contribution of the thalamus to vestibular or to tectal functions is almost ignored. The thalamus has been thought of as a "relay" that simply forwards signals to the cerebral cortex. Newer research suggests that thalamic function is more selective.[20] Many different functions are linked to various regions of the thalamus. This is the case for many of the sensory systems (except for the olfactory system), such as the auditory, somatic, visceral, gustatory and visual systems where localized lesions provoke specific sensory deficits. A major role of the thalamus is support of motor and language systems, and much of the circuitry implicated for these systems is shared. The thalamus is functionally connected to the hippocampus[21] as part of the extended hippocampal system at the thalamic anterior nuclei[22] with respect to spatial memory and spatial sensory datum they are crucial for human episodic memory and rodent event memory.[23][24] There is support for the hypothesis that thalamic regions connection to particular parts of the mesio-temporal lobe provide differentiation of the functioning of recollective and familiarity memory.[14]

The neuronal information processes necessary for motor control were proposed as a network involving the thalamus as a subcortical motor center.[25] Through investigations of the anatomy of the brains of primates[26] the nature of the interconnected tissues of the cerebellum to the multiple motor cortices suggested that the thalamus fulfills a key function in providing the specific channels from the basal ganglia and cerebellum to the cortical motor areas.[27][28] In an investigation of the saccade and antisaccade[29] motor response in three monkeys, the thalamic regions were found to be involved in the generation of antisaccade eye-movement (that is, the ability to inhibit the reflexive jerking movement of the eyes in the direction of a presented stimulus].[30]

Recent research suggests that the mediodorsal thalamus may play a broader role in cognition. Specifically, the mediodorsal thalamus may "amplify the connectivity (signaling strength) of just the circuits in the cortex appropriate for the current context and thereby contribute to the flexibility (of the mammalian brain) to make complex decisions by wiring the many associations on which decisions depend into weakly connected cortical circuits."[31] Researchers founds that "enhancing MD activity magnified the ability of mice to “think,”[31] driving down by more than 25 percent their error rate in deciding which conflicting sensory stimuli to follow to find the reward." [32]

The thalamic complex is composed of the perithalamus (or prethalamus, previously also known as ventral thalamus), the mid-diencephalic organiser (which forms later the zona limitans intrathalamica (ZLI) ) and the thalamus (dorsal thalamus).[33][34] The development of the thalamus can be subdivided into three steps.[35] The thalamus is the largest structure deriving from the embryonic diencephalon, the posterior part of the forebrain situated between the midbrain and the cerebrum.

After neurulation the anlage of the prethalamus and the thalamus is induced within the neural tube. Data from different vertebrate model organisms support a model in which the interaction between two transcription factors, Fez and Otx, are of decisive importance. Fez is expressed in the prethalamus, and functional experiments show that Fez is required for prethalamus formation.[36][37] Posteriorly, Otx1 and Otx2 abut the expression domain of Fez and are required for proper development of the thalamus.[38][39]

At the interface between the expression domains of Fez and Otx, the mid-diencephalic organizer (MDO, also called the ZLI organiser) is induced within the thalamic anlage. The MDO is the central signalling organizer in the thalamus. A lack of the organizer leads to the absence of the thalamus. The MDO matures from ventral to dorsal during development. Members of the SHH family and of the Wnt family are the main principal signals emitted by the MDO.

Besides its importance as signalling center, the organizer matures into the morphological structure of the zona limitans intrathalamica (ZLI).

Maturation and parcellation of the thalamus[edit]

After its induction, the MDO starts to orchestrate the development of the thalamic anlage by release of signalling molecules such as SHH.[41] In mice, the function of signaling at the MDO has not been addressed directly due to a complete absence of the diencephalon in SHH mutants.[42]

Studies in chicks have shown that SHH is both necessary and sufficient for thalamic gene induction.[43] In zebrafish, it was shown that the expression of two SHH genes, SHH-a and SHH-b (formerly described as twhh) mark the MDO territory, and that SHH signaling is sufficient for the molecular differentiation of both the prethalamus and the thalamus but is not required for their maintenance and SHH signaling from the MDO/alar plate is sufficient for the maturation of prethalamic and thalamic territory while ventral Shh signals are dispensable.[44]

The exposure to SHH leads to differentiation of thalamic neurons. SHH signaling from the MDO induces a posterior-to-anterior wave of expression the proneural gene Neurogenin1 in the major (caudal) part of the thalamus, and Ascl1 (formerly Mash1) in the remaining narrow stripe of rostral thalamic cells immediately adjacent to the MDO, and in the prethalamus.[45][46]

This zonation of proneural gene expression leads to the differentiation of glutamatergic relay neurons from the Neurogenin1+ precursors and of GABAergic inhibitory neurons from the Ascl1+ precursors. In fish, selection of these alternative neurotransmitter fates is controlled by the dynamic expression of Her6 the homolog of HES1. Expression of this hairy-like bHLH transcription factor, which represses Neurogenin but is required for Ascl1, is progressively lost from the caudal thalamus but maintained in the prethalamus and in the stripe of rostral thalamic cells. In addition, studies on chick and mice have shown that blocking the Shh pathway leads to absence of the rostral thalamus and substantial decrease of the caudal thalamus. The rostral thalamus will give rise to the reticular nucleus mainly whereby the caudal thalamus will form the relay thalamus and will be further subdivided in the thalamic nuclei.[35]

In humans, a common genetic variation in the promoter region of the serotonin transporter (the SERT-long and -short allele: 5-HTTLPR) has been shown to affect the development of several regions of the thalamus in adults. People who inherit two short alleles (SERT-ss) have more neurons and a larger volume in the pulvinar and possibly the limbic regions of the thalamus. Enlargement of the thalamus provides an anatomical basis for why people who inherit two SERT-ss alleles are more vulnerable to major depression, posttraumatic stress disorder, and suicide.[47]

A cerebrovascular accident (stroke) can lead to the thalamic pain syndrome,[48] which involves a one-sided burning or aching sensation often accompanied by mood swings. Bilateral ischemia of the area supplied by the paramedian artery can cause serious problems including akinetic mutism, and be accompanied by oculomotor problems. A related concept is thalamocortical dysrhythmia. The occlusion of the artery of Percheron can lead to a bilateral thalamus infarction.

Alcoholic Korsakoff syndrome stems from damage to the mammillary body, the mammillothalamic fasciculus or the thalamus.[49][50]

Fatal familial insomnia is a hereditary prion disease in which degeneration of the thalamus occurs, causing the patient to gradually lose his ability to sleep and progressing to a state of total insomnia, which invariably leads to death. In contrast, damage to the thalamus can result in coma.