Even though anatomically part of the GI tract, diseases of the mouth are often not considered alongside other gastrointestinal diseases. By far the most common oral conditions are plaque-induced diseases (e.g. gingivitis, periodontitis, dental caries). Some diseases which involve other parts of the GI tract can manifest in the mouth, alone or in combination, including:

Oesophageal disease may result in a sore throat, throwing up blood, difficulty swallowing or vomiting. Chronic or congenital diseases might be investigated using barium swallows, endoscopy and biopsy, whereas acute diseases such as reflux may be investigated and diagnosed based on symptoms and a medical history alone.[3]:863–867

Gastric diseases refer to diseases affecting the stomach. Inflammation of the stomach by infection from any cause is called gastritis, and when including other parts of the gastrointestinal tract called gastroenteritis. When gastritis persists in a chronic state, it is associated with several diseases, including atrophic gastritis, pyloric stenosis, and gastric cancer. Another common condition is gastric ulceration, peptic ulcers. Ulceration erodes the gastric mucosa, which protects the tissue of the stomach from the stomach acids. Peptic ulcers are most commonly caused by a bacterial Helicobacter pylori infection.[3] :870–871

As well as peptic ulcers, vomiting blood may result from abnormal arteries or veins that have ruptured, including Dieulafoy's lesion and Gastric antral vascular ectasia. Congenital disorders of the stomach include pernicious anaemia, in which a targeted immune response against parietal cells results in an inability to absorb vitamin B12. Other common symptoms that stomach disease might cause include indigestion or dyspepsia, vomiting, and in chronic disease, digestive problems leading to forms of malnutrition.[3] :850–853 In addition to routine tests, an endoscopy might be used to examine or take a biopsy from the stomach.[3] :848

The small and large intestines may be affected by infectious, autoimmune, and physiological states. Inflammation of the intestines is called enterocolitis, which may lead to diarrhea.

Acute conditions affecting the bowels include infectious diarrhea and mesenteric ischaemia. Causes of constipation may include faecal impaction and bowel obstruction, which may in turn be caused by ileus, intussusception, volvulus. Inflammatory bowel disease is a condition of unknown aetiology, classified as either Crohn's disease or ulcerative colitis, that can affect the intestines and other parts of the gastrointestinal tract. Other causes of illness include intestinal pseudoobstruction, and necrotizing enterocolitis.[3]:850–862, 895–903

Diseases of the intestine may cause vomiting, diarrhoea or constipation, and altered stool, such as with blood in stool. Colonoscopy may be used to examine the large intestine, and a person's stool may be sent for culture and microscopy. Infectious disease may be treated with targeted antibiotics, and inflammatory bowel disease with immunosuppression. Surgery may also be used to treat some causes of bowel obstruction.[3]:850–862

Diseases of the small intestine may present with symptoms such as diarrhoea, malnutrition, fatigue and weight loss. Investigations pursued may include blood tests to monitor nutrition, such as iron levels, folate and calcium, endoscopy and biopsy of the duodenum, and barium swallow. Treatments may include renutrition, and antibiotics for infections.[3]:879–887 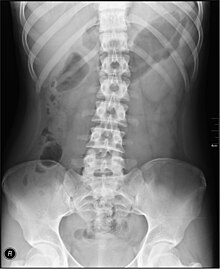 Abdominal X-rays may be used to visualise the large intestine.

Diseases that affect the large intestine may affect it in whole or in part. Appendicitis is one such disease, caused by inflammation of the appendix. Generalised inflammation of the large intestine is referred to as colitis, which when caused be the bacteria Clostridium difficile is referred to as pseudomembranous colitis. Diverticulitis is a common cause of abdominal pain resulting from outpouchings that particularly affects the colon. Functional colonic diseases refer to disorders without a known cause, and include irritable bowel syndrome and intestinal pseudoobstruction. Constipation may result from lifestyle factors, impaction of a rigid stool in the rectum, or in neonates, Hirschprung's disease.[3]:913–915

Hepatic diseases refers to those affecting the liver. Hepatitis refers to inflammation of liver tissue, and may be acute or chronic. Infectious viral hepatitis, such as hepatitis A, B and C, affect in excess of (X) million people worldwide. Liver disease may also be a result of lifestyle factors, such as fatty liver and NASH. Alcoholic liver disease may also develop as a result of chronic alcohol use, which may also cause alcoholic hepatitis. Cirrhosis may develop as a result of chronic hepatic fibrosis in a chronically inflamed liver, such as one affected by alcohol or viral hepatitis.[3]:947–958

Liver abscesses are often acute conditions, with common causes being pyogenic and amoebic. Chronic liver disease, such as cirrhosis, may be a cause of liver failure, a state where the liver is unable to compensate for chronic damage, and unable to meet the metabolic demands of the body. In the acute setting, this may be a cause of hepatic encephalopathy and hepatorenal syndrome. Other causes of chronic liver disease are genetic or autoimmune disease, such as hemochromatosis, Wilson's disease, autoimmune hepatitis, and primary biliary cirrhosis.[3]:959–963, 971

Acute liver disease rarely results in pain, but may result in jaundice. Infectious liver disease may cause a fever. Chronic liver disease may result in a buildup of fluid in the abdomen, yellowing of the skin or eyes, easy bruising, immunosuppression, and feminsation.[citation needed] Portal hypertension is often present, and this may lead to the development of prominent veins in many parts of the body, such as oesophageal varices, and haemorrhoids.[3]:959–963, 971–973

In order to investigate liver disease, a medical history, including regarding a person's family history, travel to risk-prone areas, alcohol use and food consumption, may be taken. A medical examination may be conducted to investigate for symptoms of liver disease. Blood tests may be used, particularly liver function tests, and other blood tests may be used to investigate the presence of the Hepatitis viruses in the blood, and ultrasound used. If ascites is present, abdominal fluid may be tested for protein levels.[3]:921, 926–927

Pancreatic diseases that affect digestion refers to disorders affecting the exocrine pancreas, which is a part of the pancreas involved in digestion.

Pancreatic disease may present with or without symptoms. When symptoms occur, such as in acute pancreatitis, a person may suffer from acute-onset, severe mid-abdominal pain, nausea and vomiting. In severe cases, pancreatitis may lead to rapid blood loss and systemic inflammatory response syndrome. When the pancreas is unable to secrete digestive enzymes, such as with a pancreatic cancer occluding the pancreatic duct, result in jaundice. Pancreatic disease might be investigated using abdominal x-rays, MRCP or ERCP, CT scans, and through blood tests such as measurement of the amylase and lipase enzymes.[3]:888–894

Diseases of the hepatobiliary system affect the biliary tract (also known as the biliary tree), which secretes bile in order to aid digestion of fats. Diseases of the gallbladder and bile ducts are commonly diet-related, and may include the formation of gallstones that impact in the gallbladder (cholecystolithiasis) or in the common bile duct (choledocholithiasis).[3]:977–978

Disease of the biliary tree may cause pain in the upper right abdomen, particularly when pressed. Disease might be investigated using ultrasound or ERCP, and might be treated with drugs such as antibiotics or UDCA, or by the surgical removal of the gallbladder.[3]:977–979