For other meanings of "agonist" or "agonism", see agonist (disambiguation). For a primary fictional character in a work, see Protagonist and Antagonist. 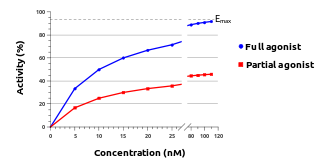 An agonist is a chemical that binds to a receptor and activates the receptor to produce a biological response. In contrast, an antagonist blocks the action of the agonist, while an inverse agonist causes an action opposite to that of the agonist.

New findings that broaden the conventional definition of pharmacology demonstrate that ligands can concurrently behave as agonist and antagonists at the same receptor, depending on effector pathways or tissue type. Terms that describe this phenomenon are "functional selectivity", "protean agonism",[4][5][6] or selective receptor modulators.[7]

Potency is the amount of agonist needed to elicit a desired response. The potency of an agonist is inversely related to its EC50 value. The EC50 can be measured for a given agonist by determining the concentration of agonist needed to elicit half of the maximum biological response of the agonist. The EC50 value is useful for comparing the potency of drugs with similar efficacies producing physiologically similar effects. The smaller the EC50 value, the greater the potency of the agonist, the lower the concentration of drug that is required to elicit the maximum biological response.

When a drug is used therapeutically, it is important to understand the margin of safety that exists between the dose needed for the desired effect and the dose that produces unwanted and possibly dangerous side-effects (measured by the TD50, the dose that produces toxicity in 50% of individuals). This relationship, termed the therapeutic index, is defined as the ratio TD50:ED50. In general, the narrower this margin, the more likely it is that the drug will produce unwanted effects. The therapeutic index emphasizes the importance of the margin of safety, as distinct from the potency, in determining the usefulness of a drug.