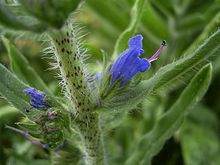 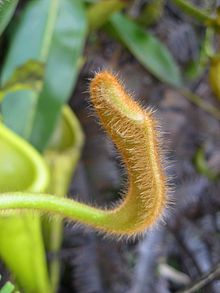 In biology, an indumentum (Latin, literally: "garment") is a covering of trichomes (fine "hairs") on a plant[1] or of bristles (rarely scales) of an insect.[citation needed]

In plants, indumentum types include:

The indumentum on plants can have a wide variety of functions, including as anchorage in climbing plants (e.g., Galium aparine), in transpiration control, in water absorption (Tillandsia), the reflection of solar radiation, increasing water-repellency (e.g., in the aquatic fern Salvinia), in protection against insect predation, and in the trapping of insects (Drosera, Nepenthes, Stylosanthes).

The use of an indumentum on insects can also be pollen-related, as on bees, sensory like whiskers, or for varied other uses including adhesion and poison.[citation needed] 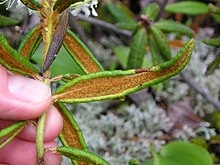