External body part or natural prolongation, that protrudes from an organism's body
For I/O appendages in OS/360 and successors, see Execute Channel Program § Appendages. For the EP by Circa Survive, see Appendage (EP). 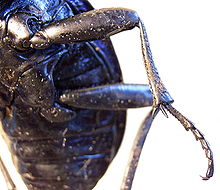 In invertebrate biology, an appendage (or outgrowth) is an external body part, or natural prolongation, that protrudes from an organism's body (in vertebrate biology, an example would be a vertebrate's limbs). An appendage is any of the homologous body parts that may extend from a body segment. These include antennae, mouthparts (including mandibles, maxillae and maxillipeds), gills, walking legs (pereiopods), swimming legs (pleopods), sexual organs (gonopods), and parts of the tail (uropods). Typically, each body segment carries one pair of appendages.

An appendage which is modified to assist in feeding is known as a maxilliped or gnathopod.

All arthropod appendages are variations of the same basic structure (homologous), and which structure is produced is controlled by "homeobox" genes. Changes to these genes have allowed scientists to produce animals (chiefly Drosophila melanogaster) with modified appendages, such as legs instead of antennae.[2]