Species of flowering plant in the daisy family Asteraceae
This article is about the Eurasian Asteraceae species. For the North American Asteraceae genus, see Parthenium. For the band, see The Feverfew.

Tanacetum parthenium, known as feverfew,[1] is a flowering plant in the daisy family, Asteraceae. It is a traditional medicinal herb that is used commonly to prevent migraine headaches. Occasionally, it is grown for ornament. It usually is identified in the literature with its synonyms, Chrysanthemum parthenium and Pyrethrum parthenium.

The plant is a herbaceous perennial that grows into a small bush,[2] up to 70 cm (28 in) high, with pungently-scented leaves. The leaves are light yellowish green, variously pinnatifid. The conspicuous daisy-like flowers are up to 20 millimetres (3⁄4 in) across, borne in lax corymbs. The outer, ray florets have white ligules and the inner, disc florets are yellow and tubular. It spreads rapidly by seed, and will cover a wide area after a few years.[3][4]

Feverfew is native to Eurasia, specifically the Balkan Peninsula, Anatolia, and the Caucasus, but cultivation has spread it around the world and it now is found in the rest of Europe, North America, and Chile.[5] 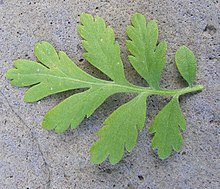 In traditional herbal medicine, feverfew has been used for fever, headache, arthritis,[7] and digestive problems.[8][9][10] 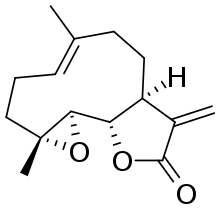 The active ingredients in feverfew include parthenolide.[11] There has been some scientific interest in parthenolide, which has been shown to induce apoptosis in some cancer cell lines in vitro and, potentially, to target cancer stem cells.[12][13][14] There are no published in vivo studies of parthenolide or feverfew for humans with cancer.[citation needed]

The role of parthenolide in inducing the antimigraine effects of feverfew has been investigated mostly in vitro. Antagonism of serotonin receptors and inhibition of neuronal released serotonin (5-HT) have been suggested for the mechanism of action.[15][16] Pathenolide also seems to play a role in the blockade of NO cascade and of the release of pro-inflammatory cytokines (TNF-α and IL-6) which might be involved in the pathogenesis of migraine.[17][18] Parthenolide has been shown to act as a TRPA1 partial agonist, causing selective channel desensitisation and a non-selective defunctionalisation of CGRP-containing sensory neurons. The release of the sensory neuropeptide CGRP within the trigeminovascular system has also been considered to be involved in the genesis of migraine headaches[19]

In August 2019, ScienceDaily reported that researchers at the University of Birmingham announced that they had developed a method to produce parthenolide directly from the plants and a way of modifying that parthenolide to produce a number of compounds, both of which techniques seem promising to enable clinical research into the potential of feverfew for medical applications.[21]

Six controlled clinical trials assessing the efficacy and safety of feverfew monotherapy in the prevention of migraine have been published.[when?] In total, 513 patients participated in these studies. Study sample sizes ranged from 17 to 170. In all studies, feverfew was self-administered orally one to three times daily in capsule form. Study duration ranged from two to eight months.[22][23][24][25][26][27] The majority of the clinical trials favoured feverfew over placebo. The data also suggest that feverfew is associated with only mild and transient adverse effects. The frequency of migraine was positively affected after treatment with feverfew. Reduction of migraine severity was also reported after intake of feverfew and incidence of nausea and vomiting decreased significantly.

Feverfew is registered as a traditional herbal medicine in the Nordic countries under the brand name Glitinum. Only powdered feverfew is approved in the European Union herbal monograph issued by the European Medicines Agency.[28]

Long-term use of feverfew followed by abrupt discontinuation may induce a withdrawal syndrome featuring rebound headaches and muscle and joint pains.[29] Feverfew may cause allergic reactions, including contact dermatitis.[30] Other side effects have included gastrointestinal upset such as nausea, vomiting, abdominal pain, diarrhea, and flatulence. When the herb is chewed or taken orally it may cause mouth ulcers and swelling and numbness of the mouth.[29] Feverfew should not be taken by pregnant women.[31] It may interact with blood thinners and increase the risk of bleeding, and also may interact with a variety of medications metabolized by the liver.[29]

The word "feverfew" derives from the Latin word febrifugia, meaning "fever reducer",[29] although it no longer is considered useful for that purpose.

Although its earliest medicinal use is unknown, it was documented in the first century (AD) as an anti-inflammatory by the Greek herbalist physician, Dioscorides.[32]